The Kansas State Capitol, known also as the Kansas Statehouse, is the building housing the executive and legislative branches of government for the U.S. state of Kansas. Located in the city of Topeka, which has served as the capital of Kansas since the territory became a state in 1861, the building is the second to serve as the Kansas Capitol. During the territorial period (1854–1861), an earlier capitol building was begun but not completed in Lecompton, Kansas, and smaller structures in Lecompton and Topeka were where the territorial legislatures met (see Capitols of Kansas).

The dome, at 304 ft (93 m), is taller than the 288 ft (88 m) United States Capitol dome, although its diameter (50 ft (15 m)) is approximately half that of the national capitol (96 ft (29 m)). It is one of the few capitols in the United States that continue to offer tours that go to the top of the dome. Visitors enter the dome by climbing 296 steps leading from the fifth floor to the top.

The land for Capitol Square was donated by Cyrus K. Holliday via his Topeka Town Company in 1862. The master architect was Edward Townsend Mix with the wings designed by John G. Haskell. Construction on the East Wing began in 1866, using "native" limestone from Geary County, Kansas. Construction began on the West Wing in 1879 using limestone from Cottonwood Falls, Kansas and in 1881, the legislature authorized and appropriated funds for the construction of a central building to link the two wings. Construction of this central building began in 1886, and the contract for dome construction was let in May, 1889.

The building was declared officially complete in 1903, after 37 years of construction.

It was not until 1988 that a design for a sculpture to stand atop the dome was finally approved. Ad Astra, a 22 2⁄12-foot (6.756 m) bronze sculpture weighing 4,420 pounds (2,000 kg), was installed atop the dome on October 10, 2002. The sculpture, by Richard Bergen, depicts a Kansa Native American with bow and arrow pointed at the North Star and was chosen from 27 entries to adorn the dome. The title Ad Astra is Latin shortening of the state motto Ad Astra Per Aspera To the stars through difficulty. 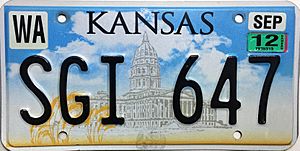 Capitol building shown in the center of Kansas license plates 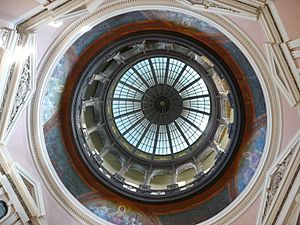 Looking up at the dome's interior in 2008

The building was featured prominently on Kansas license plates issued from January 2001 until April 2007.

In December 2001, the Statehouse began a $120 million modernization project, led by Treanor Architects; the project included restoration of its first through fifth floors, the rehabilitation and expansion of its basement, restoration of its exterior masonry and copper roof/dome. By the time the project finished in spring 2014, scope creep and delays resulted in a total cost of $332 million, covering "new heating and cooling systems, greater security and restroom accessibility, a new parking garage, visitor center, underground office space and replacing the roof and dome."

In 1898, Jerome Fedeli painted frescos near the top of the dome in the rotunda. 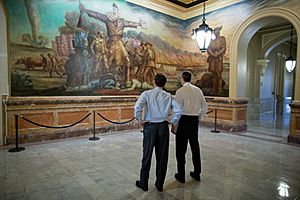 In the 1930s, John Steuart Curry painted murals on the second floor including the building's most famous painting—Tragic Prelude—which depicts an oversize and raging John Brown wedged between the warring sides of the American Civil War, flanked by flames and a tornado. Curry's work gained considerable notoriety for depicting unsavory aspects of Kansas history and he left them unsigned and did not complete a commission to paint murals in the rotunda. Curry's depiction of Brown is believed to be the only instance of a person convicted of treason being featured in a state capitol.

All content from Kiddle encyclopedia articles (including the article images and facts) can be freely used under Attribution-ShareAlike license, unless stated otherwise. Cite this article:
Kansas State Capitol Facts for Kids. Kiddle Encyclopedia.