Cottonwood Falls is the largest city and county seat of Chase County, Kansas. As of the 2010 census, the city population was 903. 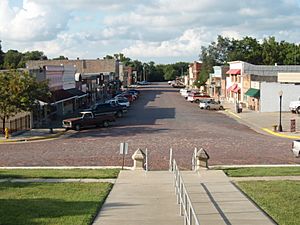 Looking northward toward the business district, as seen from Courthouse steps (2009)

The first settlement in the area of Cottonwood Falls was in 1854, when an Indian trader named Seth Hayes founded a cattle ranch on the Cottonwood River close to the mouth of Diamond Spring Creek. The area around the town was organized as Chase County in 1859, and Cottonwood Falls was designated the temporary county seat. Other early settlers arrived in Cottonwood and surrounding lands in 1856 to 1858.

The first post office in Cottonwood Falls was established in 1858. In 1873 the city's French Renaissance style Chase County courthouse was built; at roughly the same time, the Atchison, Topeka and Santa Fe Railway reached Cottonwood Falls area. Through the late 19th and early 20th centuries the area around the city was mainly divided into farms and cattle ranches.

In 1931, Transcontinental & Western Air Flight 599 crashed ten miles south of Cottonwood Falls near the community of Bazaar, killing all eight on board, including Notre Dame University football coach Knute Rockne. A monument to the crash is located on private property.

There have been numerous floods during the history of Cottonwood Falls. In June and July 1951, due to heavy rains, rivers and streams flooded numerous cities in Kansas, including Cottonwood Falls. Many reservoirs and levees were built in Kansas as part of a response to the Great Flood of 1951. 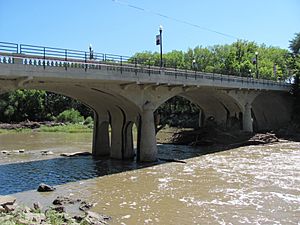 The climate in this area is characterized by hot, humid summers and generally mild to cool winters. According to the Köppen Climate Classification system, Cottonwood Falls has a humid subtropical climate, abbreviated "Cfa" on climate maps.

Cottonwood Falls has five listings on the National Register of Historic Places (NRHP).

Cottonwood Falls is part of the Emporia Micropolitan Statistical Area.

There were 342 households of which 28.7% had children under the age of 18 living with them, 46.8% were married couples living together, 9.4% had a female householder with no husband present, 3.8% had a male householder with no wife present, and 40.1% were non-families. 37.1% of all households were made up of individuals and 21.7% had someone living alone who was 65 years of age or older. The average household size was 2.22 and the average family size was 2.92.

There were 375 households out of which 28.3% had children under the age of 18 living with them, 47.2% were married couples living together, 11.7% had a female householder with no husband present, and 39.2% were non-families. 34.4% of all households were made up of individuals and 20.5% had someone living alone who was 65 years of age or older. The average household size was 2.27 and the average family size was 2.93.

All content from Kiddle encyclopedia articles (including the article images and facts) can be freely used under Attribution-ShareAlike license, unless stated otherwise. Cite this article:
Cottonwood Falls, Kansas Facts for Kids. Kiddle Encyclopedia.