Strong City is a city in Chase County, Kansas, United States. Originally known as Cottonwood Station, in 1881 it was renamed Strong City after William Barstow Strong, then vice-president and general manager, and later president of the Atchison, Topeka and Santa Fe Railway. As of the 2020 census, the population of the city was 386. It is located along U.S. Route 50 highway. 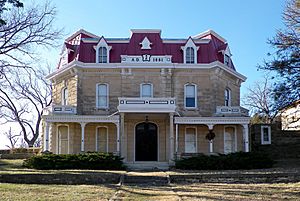 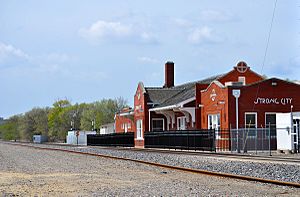 In 1881, the name was changed to Strong, in honor of William Barstow Strong, General Superintendent of the Atchison, Topeka and Santa Fe Railway, and afterward the president of the company.

The original depot was a wooden building built in 1872 then burned in 1902 and was replaced in 1903 by another wooden building. From 1887 to 1938, a six stall engine roundhouse employed many workers. 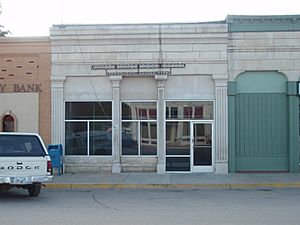 In 1912, construction of a new depot was begun about 100 feet (30 m) west of the old one, and was finished in 1913. The new brick depot was trimmed in native cut limestone was built for a cost of $20,000. A brick platform some 800-feet long was built along the front of the building, and a 250-foot freight platform was built along the rear of the building. Passenger service was discontinued in the late 1940s.

In 1945, the name was changed again, this time to Strong City.

In 1996, the Atchison, Topeka and Santa Fe Railway merged with Burlington Northern Railroad and renamed to the current BNSF Railway.

In 2006 and 2015, the "Symphony in the Flint Hills" concert was held two miles north of Strong City with thousands in attendance.

Local stonemasons and builders Barney Lantry & Son contracted with railroad companies for projects throughout the United States. In the beginning it built stone-work for certain phases of railroad construction, but later they did build complete railroads, grading, laying the track, building bridges, stations, roundhouses, and other division buildings.

The first stone-crushers Kansas ever saw were brought to the state by the Lantrys and were operated on a very large scale at Strong City. Most of the stone for masonry and road-ballast for their jobs all over the west, was taken from their quarries at Strong City. Big stones for the Kansas State Capitol came from Strong City, each stone weighing 13,000 pounds. Stone was also used for public and private buildings in Kansas, Missouri, Nebraska, Iowa and Colorado.

When Barney Lantry died in 1895, officials of the Santa Fe Railroad from Los Angeles to Chicago attended his funeral services in Strong City.

The climate in this area is characterized by hot, humid summers and generally mild to cool winters. According to the Köppen Climate Classification system, Strong City has a humid subtropical climate, abbreviated "Cfa" on climate maps.

There were 212 households, of which 25.9% had children under the age of 18 living with them, 48.6% were married couples living together, 5.2% had a female householder with no husband present, 4.2% had a male householder with no wife present, and 42.0% were non-families. 37.3% of all households were made up of individuals, and 15.5% had someone living alone who was 65 years of age or older. The average household size was 2.29 and the average family size was 3.10. 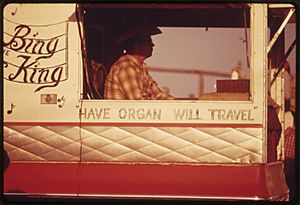 "Bing the King" playing organ at the Flint Hills Rodeo (1974) 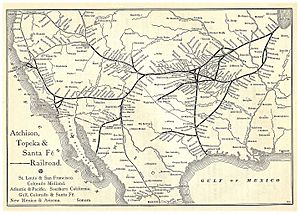 Strong City applied for an Amtrak station on Amtrak's proposed extension of the Heartland Flyer from Oklahoma City to Kansas City, Missouri. If the town's application were successful, that would make it one of the smallest towns in the Amtrak system to have a station.

All content from Kiddle encyclopedia articles (including the article images and facts) can be freely used under Attribution-ShareAlike license, unless stated otherwise. Cite this article:
Strong City, Kansas Facts for Kids. Kiddle Encyclopedia.