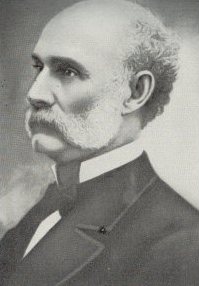 Cyrus Kurtz Holliday (April 3, 1826 – March 29, 1900) was a prominent Kansas businessman who was part of the free-state movement during the period called Bleeding Kansas. Holliday was one of the founders of the city of Topeka, Kansas and was its first president. He was also the founder of the Atchison, Topeka and Santa Fe Railway. He served in the Kansas Senate. Holliday was president of the Merchants National Bank and also the Excelsior Coke and Gas Company, both of Topeka. In 1890, he was the president of the Kansas State Historical Society. In 2012, Holliday was inducted into the Kansas State Hall of Fame.

Holliday was born near Carlisle, Pennsylvania on April 3, 1826. His parents were David and Mary (Kennedy) Holliday. Holliday attended public school and in 1852 graduated from Allegheny College in Meadville, Pennsylvania. He intended to become a lawyer but instead became a businessman. Holliday made a considerable profit of $20,000 in a short-line railroad in Pennsylvania.

In 1854, when Kansas Territory was opened up for settlement, he became one of the first settlers. His wife, Mary Dillon Jones, remained behind in Pennsylvania until after the birth of their two children, Lillie and Charles. Holliday settled first at Lawrence, Kansas and became active in the Free State movement. Believing Kansas would become a free state, he and several business associates decided to establish the town of Topeka as the capital of the new state of Kansas. He was Topeka's delegate to the Wyandotte Constitutional Convention in July 1859. That same year he was elected to the first of several terms as mayor of Topeka. He helped found the Kansas Republican Party. Holliday was a member of both the territorial and state legislatures.

He obtained a charter for a new railroad to run from Atchison, Kansas to the state capital at Topeka in 1859. In 1863, Holliday decided to extend the railroad along the route of the Santa Fe Trail to Santa Fe, New Mexico. Once there he intended it to go all the way to the Pacific Ocean in California. The name of the railroad was changed to the Atchison, Topeka and Santa Fe Railroad Company (AT&SF). A severe drought followed by the Civil War starting in 1861 prevented the railroad from making much progress. The line was completed through Kansas by December 1872. By 1880, the line was completed to Santa Fe. The railroad experienced hardships in 1893 and almost had to declare bankruptcy. Holliday was able to refinance and reorganize the railroad. He remained president of AT&SF until his death on March 31, 1900.

In 1855, he supervised a regiment of Free-Staters in the Wakarusa War during the violent period known as Bleeding Kansas. For this he was given the honorary title of colonel which he used for the rest of his life. During the Civil War he served as the adjutant general of Kansas.

All content from Kiddle encyclopedia articles (including the article images and facts) can be freely used under Attribution-ShareAlike license, unless stated otherwise. Cite this article:
Cyrus K. Holliday Facts for Kids. Kiddle Encyclopedia.