60 U.S. 393 (1857) was a United States Supreme Court landmark decision. In March 1857 the court ruled that negroes descended from slaves, whether now free or slave, were not citizens of the United States. Because they were not citizens they could not sue in a Federal court. Dred Scott had sued in federal court. He claimed he was free because he had lived in free territory. He lost his case in a ruling that has been condemned by many as the Supreme Court's worst decision.

The Dred Scott case of the U.S. Supreme Court, which denied Scott his freedom by ruling that negro-slave descendants were not U.S. citizens, was the end of years of legal cases during 1846-1857, in lower federal district court and Missouri courts which had granted Dred Scott freedom for about 2 years, until over.

Dr. John Emerson was a surgeon serving in the U.S. Army. In 1833 he purchased Dred Scott, a slave in Missouri. The same year he moved to Illinois taking Scott with him. Emerson was sent to a fort in the Wisconsin Territory. Scott, his slave, went with him. While living in the Wisconsin territory (now Minnesota) Scott met and married Harriet Robinson. She was owned by a justice of the peace. After marrying Scott, Emerson became her owner as well. Emerson returned to Missouri taking his slaves with him. In 1843 Emerson died in Missouri. Scott and his family were left to Emerson's wife, Eliza Sandford. 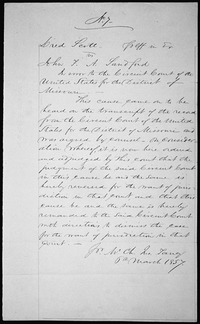 In 1846 Scott sued for his freedom in court. Helped by Abolitionist lawyers, he claimed that he was free because he had lived in free states for a long time. The defense claimed that Dr. Emerson was forced to move to the Wisconsin territory because he served with the United States Army. He should be able to keep his property. The presiding judge, Roger B. Taney, decided that Scott was not free and he did not have a right to sue. Furthermore, he stated that Congress could not make laws prohibiting slavery in United States territories. This was the majority opinion with seven out of nine Justices agreeing.

The opinion of the dissenting justices was that, at the time the Constitution was ratified, African Americans were already considered citizens in several states.

The ruling was a major setback to the anti-slavery movement. The Republicans condemned the ruling. In effect, it allowed slavery in the northern states. It became a central issue in slavery debates in the US. In 1868 the Fourteenth Amendment overturned the Dred Scott decision. It gave all persons born or naturalized in the United States citizenship regardless of their color.

Soon after the court decision of 1857 Eliza Sandford sold Scott and his family to Taylor Blow. Blow (one of Scott's previous owners) then granted Scott and his family their freedom. Scott died a free man on September 17, 1858. He did not live long enough to see African Americans become United States citizens.

Other Supreme Course Cases Later Overturned by US Constitution Amendments

Dred Scott is one of only four decisions by the Supreme Court that were overturned by an amendment to the United States Constitution. The other three are:

Arguably, one more case could be added:

All content from Kiddle encyclopedia articles (including the article images and facts) can be freely used under Attribution-ShareAlike license, unless stated otherwise. Cite this article:
Dred Scott v. Sandford Facts for Kids. Kiddle Encyclopedia.