Sixteenth Amendment to the United States Constitution facts for kids 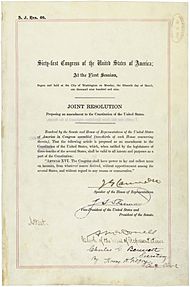 The Sixteenth Amendment in the National Archives

Ratified on February 3, 1913, the Sixteenth Amendment (Amendment XVI) to the United States Constitution allows the Congress to impose a federal income tax. This allows the federal government to collect a tax on personal income, no matter where that income came from. The Sixteenth Amendment overturned the 1895 Supreme Court landmark decision in Pollock v. Farmers' Loan & Trust Co. In Pollock, the Court ruled that a 2 percent tax on incomes over $4,000 was unconstitutional. This was because the law the ruling struck down did not allow for apportionment, the court ruled against it. The Sixteenth Amendment allowed Congress to levy a uniform direct income tax without being subject to apportionment.

"The Congress shall have power to lay and collect taxes on incomes, from whatever source derived, without apportionment among the several States, and without regard to any census or enumeration."

When the framers of the Constitution were determining how the new government would be funded, they were trying to avoid a tax based on a person's income. In the Constitution, Article one, Sections 2 and 9 created the "rule of apportionment". On a practical basis this required Congress to tax the states based on each state's population instead of a tax on each person's income or property. For example, if a state made up four percent of the total population, they would be required to pay four percent of the total federal tax. The framers of the Constitution expected direct taxes to be used and defined the term broadly. However, they did not see that apportionment would cripple any attempt to collect direct taxes.

Before 1913, the bulk of federal revenues came from indirect taxes on goods. These include tariffs on goods imported into the country. They also included excise taxes on items like whiskey. Income taxes were not new in 1913. Congress had passed the Revenue Act of 1861 during the Civil War to help pay for the war. Ten years later it was allowed to lapse. The Confederate States of America also had an income tax. Starting in 1863, the tax exempted the first $1,000 and charged a 1% tax on the first $1,500 over the exemption. A 2% tax was levied on all income over that amount.

In 1894, Congress passed the Wilson–Gorman Tariff Act which included a flat rate federal income tax of 2 percent. A year later, the Supreme Court handed down their decision in Pollock v. Farmers' Loan & Trust Co.. They ruled the tax unconstitutional because it was a direct tax and not apportioned to the population of each state.

"I therefore recommend to the Congress that both houses by a two-thirds vote shall propose an amendment to the Constitution conferring the power to levy an income tax upon the National Government without apportionment among the States in proportion to population."

After a debate on the floor of the House lasting five hours, the bill was passed 314-14 (1 vote as "present" and 55 not voting). It was then sent to the state legislatures for ratification. The amendment gave Congress the power to apply a direct tax, based on people's incomes, and not subject to the apportionment rule.

Effects of the Sixteenth Amendment

All content from Kiddle encyclopedia articles (including the article images and facts) can be freely used under Attribution-ShareAlike license, unless stated otherwise. Cite this article:
Sixteenth Amendment to the United States Constitution Facts for Kids. Kiddle Encyclopedia.