Twenty-sixth Amendment to the United States Constitution facts for kids

Section 1. The right of citizens of the United States, who are eighteen years of age or older, to vote shall not be denied or abridged by the United States or by any State on account of age.

Section 2. The Congress shall have the power to enforce this article by appropriate legislation.

Lowering the minimum voting age was not a new idea. In the United States, some people started trying to get the voting age lowered during World War II. During the war, President Franklin D. Roosevelt lowered the military draft age to 18. This meant that men as young as 18 could be forced to join the military. To many people, it did not seem fair that the government thought these young men were old enough to fight a world war, but not old enough to vote in the country they were fighting for. "Old enough to fight, old enough to vote" became a common slogan.

United States Senator Harley Kilgore had begun supporting a lowered voting age in 1941. Many other Senators, Representatives, and the First Lady, Eleanor Roosevelt, supported the idea. However, Congress never made any changes.

Kilgore's ideas did interest some of the states. In 1943, the Georgia state legislature passed a law lowering the voting age in the state to 18; in 1955, Kentucky did the same thing.

In his State of the Union address in 1954, President Dwight D. Eisenhower became the first president to say publicly that he supported letting people ages 18 and older vote.

In 1963, the President's Commission on Registration and Voting Participation made a report to President Lyndon B. Johnson. The report encouraged Johnson to lower the voting age. 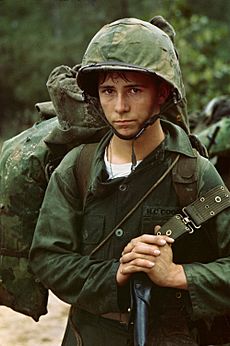 Too young to vote, this Marine is fighting in Vietnam

During the 1960s, many Americans pushed both Congress and the state legislatures to lower the minimum voting age from 21 to 18. This was mostly because of to the Vietnam War. As the war went on, more and more people started to protest the war and become active. During that war, many young men were drafted and sent to fight in the war before they were old enough to vote. This meant they had no way to influence the people sending them off to risk their lives. Protesters started to use the slogan "Old enough to fight, old enough to vote" again.

Supporters also argued that the law treated eighteen-year-olds as adults in many other ways. For example, they had to pay income taxes. Supporters argued that this was "taxation without representation" – meaning that 18- to 20-year-olds had to pay taxes, but had no say in what those taxes were or what they were spent on, because they could not vote.

In 1967, United States Representative William St. Onge pointed out: ""To tax our 18-, 19-, and 20-year-olds without giving them the right to vote ignores the great rallying cry of our War of Independence that there [should] be 'no taxation without representation.'"

Similarly, in 1970, in a committee that was debating a possible Constitutional amendment to lower the voting age, Representative Thomas Railsback said: ""Our laws tax these 18-year-olds but our voting laws do not permit them representation in enacting that tax law. The Boston Tea Party was supposed to have been the spark that put that issue to rest in this country."

Not everybody supported lowering the minimum voting age. Opponents to giving younger people the vote had several arguments. Many argued that teenagers were not mature or responsible enough to vote.

Other people argued that teenagers did not know enough to have the right to vote. One historian writes:

A former U.S. District Judge testified before Congress that, based on the results of quizzes and polling, teens [had] 'a [terrible] ignorance of even our own country's history, to say nothing of the history of the world. Anybody really qualified to exercise the right of suffrage ought to have a fair knowledge of the course of history.'"

Another example comes from an editorial written by the New York Times in 1967. The paper wrote: "The requirements for a good soldier and for a good voter are not the same. For the soldier, youthful enthusiasm and physical endurance are [of most] importance; for the voter, maturity of judgment far outweighs other qualifications."

Finally, some people thought lowering the voting age was not that important for the country, and that it should be left up to each individual state. 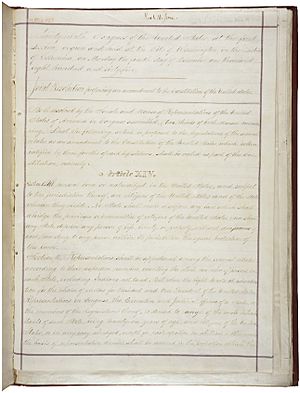 Amending the Voting Rights Act of 1965

In 1970, United States Senators Ted Kennedy and Mike Mansfield suggested changing the Voting Rights Act of 1965 to lower the voting age in the United States.

The Equal Protection Clause of the Fourteenth Amendment says that the government has to give every person "the equal protection of its laws." People who supported the addition to the Voting Rights Act of 1965, like Ted Kennedy, said that by not allowing 18- to 20-year-olds to vote, the government not treating them equally by not letting them vote.

President Nixon disagreed with Kennedy. He was not against lowering the voting age. However, he did not agree with Kennedy's legal argument. He also worried that if the Supreme Court thought the new Voting Rights Act was unconstitutional, they could overturn it – cancel the entire law. Nixon thought this could cause a lot of damage to the country.

However, on June 22, 1970, President Richard Nixon signed an extension (an addition) to the Voting Rights Act of 1965. The change required the voting age to be 18 in all federal, state, and local elections. After signing the change, Nixon said:

After Nixon signed this change, about 17 states refused to change their minimum voting ages to 18.

In Oregon v. Mitchell, the Supreme Court looked at whether the voting age changes that Congress added to the Voting Rights Act were constitutional. This means they looked at whether the changes agreed with the rules in the Constitution, or broke them. The judges on the Supreme Court strongly disagreed with each other in this case. Eventually, five out of the nine judges agreed on a decision - just enough to reach the majority needed for a decision. However, most of the judges did not agree on which legal reason was behind their decision. 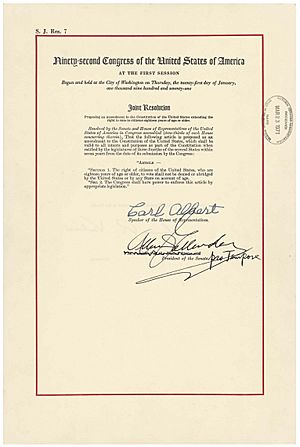 First of all, the states did not want to deal with the cost and difficulty of having to keep two different voting registers, so they supported the idea of a Constitutional amendment. Also, when they changed the Voting Rights Act, Congress had made a law about state and local elections without the states having any say. However, for an amendment to be added to the Constitution, two-thirds of both Houses of Congress, and then three-fourths of the state legislatures, have to agree on it. (These rules are set out in Article Five of the Constitution.) An amendment would be something that both Congress and the states agreed on. Congress would not be over-using its power and breaking the Constitution by making laws for the states.

On July 5, 1971, President Richard Nixon held a ceremony at the White House, where he signed the Twenty-sixth Amendment just to show his support. (The President does not have to sign an amendment in order for it to be added to the Constitution.) During the signing ceremony, he talked about his confidence in the United States' young people:

All content from Kiddle encyclopedia articles (including the article images and facts) can be freely used under Attribution-ShareAlike license, unless stated otherwise. Cite this article:
Twenty-sixth Amendment to the United States Constitution Facts for Kids. Kiddle Encyclopedia.