Justice of the peace facts for kids 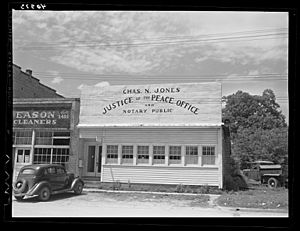 Justice of the Peace in Graham, Alamance County, North Carolina

A justice of the peace (JP) is a judicial officer, elected or appointed to a local court that has limited jurisdiction. In some locations a JP deals with traffic violations, parking tickets and may have the authority to perform marriages ceremonies. In many places they are the entry-level courts that most criminal cases pass through. JP courts were popular in early history, but are now found mostly in rural areas. Otherwise people would have to travel longer distances to other courts of law. 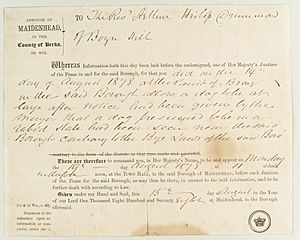 Summons issued by Justice of the Peace

In 1195, a proclamation of Richard I of England local knights were appointed to keep order. In 1264, "Keepers of the Peace were appointed in every county to serve the king. Such men were called "Justice of the Peace" beginning in about 1362. When colonists came to British North America they brought with them the common law system that included JPs. In France, "Lords of the Court" administered justice. After 1789, justices of the peace were elected.

While the requirements vary from one jurisdiction to another, generally, to become a JP there are few if any educational requirements. An application is filled out and usually there is a fee. Justices may be chosen by their qualifications and references. Many have law degrees while others may have taken a few law classes.

All content from Kiddle encyclopedia articles (including the article images and facts) can be freely used under Attribution-ShareAlike license, unless stated otherwise. Cite this article:
Justice of the peace Facts for Kids. Kiddle Encyclopedia.