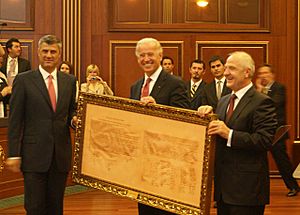 Secession usually means when part of one country breaks away, or leaves that country to start a new country. During the American Civil War, eleven southern states declared their secession (independence) from the United States.

All content from Kiddle encyclopedia articles (including the article images and facts) can be freely used under Attribution-ShareAlike license, unless stated otherwise. Cite this article:
Secession Facts for Kids. Kiddle Encyclopedia.