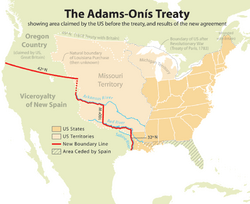 Map showing the results of the Adams-Onís Treaty of 1819

The Adams-Onís Treaty (also called the Florida treaty) was a treaty between Spain and the United States of America in 1819. This treaty gave the state of Florida to the United States. It settled a standing border dispute between the two countries.

The treaty was considered a triumph of American diplomacy. It came at a time of increasing difficulties related to Spain's territorial boundaries in North America. This was with both the United States and Great Britain following the American Revolution. There were also tensions during the Latin American Wars of Independence. Florida had become a problem for Spain. It could not afford to send settlers or garrisons.

The treaty was signed in Washington, DC on February 22, 1819. It was ratified in Madrid, Spain on October 24, 1820. The treaty actually went into effect on February 22, 1821. Madrid decided to cede the territory of Florida to the United States. This was in exchange for settling the boundary dispute along the Sabine River in Texas. The treaty established the boundary of U.S. territory. It recognized the claims of the United States through the Rocky Mountains and west to the Pacific Ocean. In exchange the U.S. paid residents' claims against the Spanish government up to a total of $5,000,000. The United States also gave up its claims on parts of Spanish Texas west of the Sabine River and other Spanish areas, under the agreements in the Louisiana Purchase. Adams-Onis was a key event in determining the U.S.-Mexico border.

All content from Kiddle encyclopedia articles (including the article images and facts) can be freely used under Attribution-ShareAlike license, unless stated otherwise. Cite this article:
Adams–Onís Treaty Facts for Kids. Kiddle Encyclopedia.