Greer County, a county created by the Texas legislature on February 8, 1860 (and was named for John Alexander Greer, Lieutenant Governor of Texas), was land claimed by both Texas and the United States. The region of Greer County is now in present-day Oklahoma.

Origin of the dispute

The dispute arose from a map submitted with the Adams-Onís Treaty of 1819. The treaty stated that the boundary between the French claims on the north and the Spanish claims on the south was Rio Roxo de Natchitoches (Red River) until it reached the 100th meridian west as noted on John Melish's map published in 1818. The problem was that the 100th meridian on the Melish map was some 90 miles (140 km) east of the true 100th meridian and the Red River forked about 50 miles (80 km) east of the 100th meridian. Texas claimed the land south of the North Fork and the United States claimed the land north of the South Fork (later called the Prairie Dog Town Fork Red River).

United States vs. State of Texas 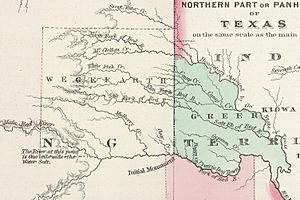 Map of Greer and Wegefarth counties in 1874.

When Oklahoma became the 46th U.S. state (November 16, 1907), old "Greer County" was divided into Greer, Jackson, and part of Beckham counties. Harmon County was created May 22, 1909 by a vote of the people from a portion of Greer County, Oklahoma.

All content from Kiddle encyclopedia articles (including the article images and facts) can be freely used under Attribution-ShareAlike license, unless stated otherwise. Cite this article:
Greer County, Texas Facts for Kids. Kiddle Encyclopedia.