Beckham County is a county located on the western border of the U.S. state of Oklahoma. As of the 2010 census, the population was 22,119. Its county seat is Sayre. Founded upon statehood in 1907, Beckham County was named for J. C. W. Beckham, who was Governor of Kentucky and the first popularly elected member of the United States Senate from Kentucky. Beckham County comprises the Elk City, OK Micropolitan Statistical Area.

(Beckham County, Kentucky was organized and named on February 9, 1904, but was dissolved April 29, 1904, by the Kentucky Court of Appeals because it was not created in conformance with state law).

In 1855, the U.S. government leased the western part of the formerly reserved Choctaw and Chickasaw Nation lands, which became known as the Leased District. After the Civil War, the two nations were forced to cede the land to the US government under terms of new treaties required because they had been allies of the Confederacy. Under the treaties they were also required to emancipate their slaves and provide them with citizenship in their nations.

In 1869, the former Leased District was designated by the President as the Cheyenne Arapaho Reservation, following their removal from further west. During the 1880s, Texas cattlemen leased grazing land from the Cheyenne and Arapaho.

Under the Dawes Act of 1891, the government split up such communal lands, allocating plots to individual households of various tribes. After distribution was made, the government declared any additional lands on the reservation to be "surplus". In 1892, the government opened such surplus land to settlement by non-Indians, attracting numerous European-American settlers and immigrants.

The area was designated as County F in the newly created Oklahoma Territory, until it was renamed Roger Mills County. At statehood, portions of land from both Roger Mills and Greer counties were joined to form Beckham County. Sayre was named as the temporary county seat. A 1908 election after statehood made Sayre, Oklahoma the permanent seat.

In 1910, a piece of southern Beckham County was returned to Greer County. The Gannett survey of 1927-1929 found that the true 100th Meridian, the boundary between Texas and western Oklahoma, was 3,800 feet (1,200 m) farther east than previously thought. The US Supreme Court ruled that the strip of land must be returned to Texas, thereby reducing Beckham County's area slightly. 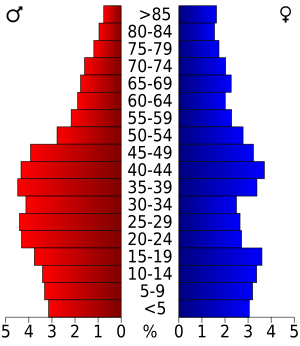 Age pyramid for Beckham County, Oklahoma, based on census 2000 data.

There were 8,163 households out of which 34.6% included children under the age of 18, 50.9% were married couples living together, 11.1% had a female householder with no husband present, 5.1% had a male householder with no wife present, and 32.8% were non-families. Individuals living alone accounted for 27.6% of households and 11.2% had someone living alone who was 65 years of age or older. The average household size was 2.48 and the average family size was 3.02.

The following sites in Beckham County are listed on the National Register of Historic Places:

All content from Kiddle encyclopedia articles (including the article images and facts) can be freely used under Attribution-ShareAlike license, unless stated otherwise. Cite this article:
Beckham County, Oklahoma Facts for Kids. Kiddle Encyclopedia.