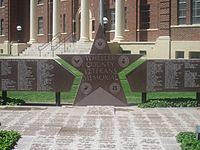 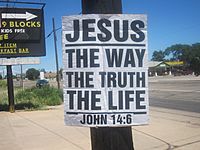 Wheeler County is a county located in the U.S. state of Texas. As of the 2010 census, its population was 5,410. Its county seat is Wheeler. The county was formed in 1876 and organized in 1879. It is named for Royall Tyler Wheeler, a chief justice of the Texas Supreme Court.

Wheeler County was one of thirty prohibition or entirely dry counties in the state of Texas. However, in approximately 2010, the community of Shamrock, located in Wheeler County at the intersection of Interstate 40 (old U.S. Route 66) and U.S. Highway 83, voted to allow liquor sales. Within the city limits of Shamrock is the only place to purchase liquor in Wheeler County.

In 1876, the Texas State Legislature established Wheeler County. In 1879, Mobeetie was named the county seat. Mobeetie was then known as "Sweetwater," but this name should not be confused with the Sweetwater, which is the seat of Nolan County west of Abilene. A stone courthouse was erected from locally quarried materials in 1880 but was replaced by a wooden structure in 1888. The town of Wheeler was designated as the county seat in 1908. The wooden courthouse was moved to the current site but was replaced by the existing structure as a result of a 1925 bond election. The previous building was sold to a sheriff, Riley Price, who dismantled it and used it to build barns on his nearby ranch. The structure was designed by E. H. Eads of Shamrock and built by local contractors Hughes and Campbell. It features Palladian windows and Corinthian columns, characteristic of the Greek revival style of architecture.

In the 1880s, Temple Lea Houston, the youngest son of Sam Houston, was the district attorney of the 35th Judicial District of Texas, when then encompassed twenty-six counties in the Texas Panhandle. The district was based at the time in the courthouse at Mobeetie in Wheeler County. Houston was also a member of the Texas State Senate from 1885 to 1889 and later moved to Oklahoma, where he worked for statehood. An NBC television series, Temple Houston, which aired from 1963 to 1964, is loosely based on his life, with Jeffrey Hunter in the starring role.

The Pioneer West Museum, the Wheeler County historical museum, is located in Shamrock off U.S. Highway 83.

U.S. Highway 66 is no longer officially commissioned or signed, but has special brown historic signage at various points along its former routing.

All content from Kiddle encyclopedia articles (including the article images and facts) can be freely used under Attribution-ShareAlike license, unless stated otherwise. Cite this article:
Wheeler County, Texas Facts for Kids. Kiddle Encyclopedia.