Donley County is a county located in the U.S. state of Texas. As of the 2010 census, its population was 3,677. Its county seat is Clarendon. The county was created in 1876 and later organized in 1882.

Donley County was established in 1876 from land given by the Bexar District. It is named for Stockton P. Donley, justice of the state supreme court.

There are several historical sites listed on the National Register of Historic Places in Donley County.

The Saints' Roost Museum in Clarendon is dedicated to the American West.

The Harold Dow Bugbee Ranch, formerly owned by the Western artist and his second wife, Olive Vandruff Bugbee, also an artist, is located in Donley County.

The legendary cattle baron Charles Goodnight spent his later years in Donley County. It was also the home of historian Harley True Burton, author of A History of the JA Ranch, which Goodnight formerly co-owned. Burton was president of Clarendon College and the mayor of Clarendon from 1955-1963. The JA Ranch is located in the counties of Donley, Hall, Briscoe, and Armstrong.

On U.S. Highway 287, which runs through the county, there is a modern rest area but no longer offers wi-fi. The rest area also offers sanctuary from weather offering a tornado shelter in the main building. 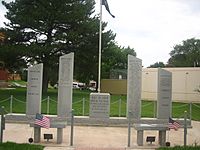 All content from Kiddle encyclopedia articles (including the article images and facts) can be freely used under Attribution-ShareAlike license, unless stated otherwise. Cite this article:
Donley County, Texas Facts for Kids. Kiddle Encyclopedia.