Kids Encyclopedia Facts
Not to be confused with Hemphill, Texas. 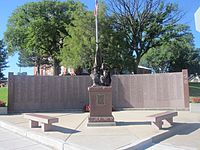 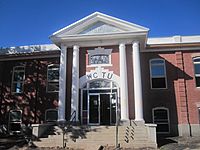 The former Woman's Christian Temperance Union building in Canadian is being converted into a new Hemphill County Library. 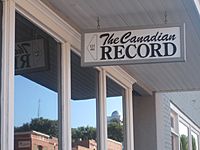 Hemphill County is a county located in the U.S. state of Texas. As of the 2010 census, its population was 3,807. The county seat and only incorporated community in the county is Canadian. The county was created in 1876 and organized in 1887. It is named for John Hemphill, a judge and Confederate congressman. Hemphill County is one of 30 prohibition, or entirely dry, counties in the state of Texas.

For the 200 years leading up to 1875, nomadic Indian tribes representing the Apache, Comanche, Kiowa, and others roamed the Panhandle following the huge buffalo herds. In search for an alternate route to California through Santa Fe, New Mexico, Josiah Gregg (1840), and Captain Randolph B. Marcy (1845) surveyed trails that crossed Hemphill County, following the south bank of the Canadian River.

The 1874–75 Red River War was an effort by the United States Army to force the Indians of the Southern Plains to move to Indian Territory in present-day Oklahoma. Two major battles took place in what would become Hemphill County: the Battle of Lyman’s Wagon Train and the Battle of Buffalo Wallow.

On July 4, 1888, the first rodeo in Texas and perhaps the world was held on the Main Street of Canadian, Texas. It began as a competition among some of the larger ranches in the area the annual Fourth of July Rodeo continues in present times.

An emphasis on ecotourism, taking advantage of the landscape and habitat, has diversified the economy of Hemphill County.

In 1886, the Southern Kansas Railway Company, a Santa Fe subsidiary, began to build a rail line into the Panhandle of Texas. The tracks entered Hemphill County during 1887 and further encouraged settlement in the area, creating three town sites: Mendota, Canadian, and Glazier.

In 1907, Canadian was designated a division point by the Santa Fe, a factor which brought diversification to the previously ranching economy of the area. The Santa Fe influence would remain very strong until the mid-1950s when the railway moved its employees to Amarillo.

Abraham Companies are based in the Moody Building, a former hotel in Canadian.

Nahim Abraham and his son, Tom Abraham, immigrants from Lebanon, operated for many years The Fair Store, a department store in Canadian which became regionally known for its high-quality merchandise. Tom Abraham also worked to assist immigrants in becoming American citizens and in 1980 won a national award from Freedoms Foundation.

Tom Abraham's younger brother, Malouf Abraham, Sr., was a wealthy oil and natural gas developer and philanthropist who served as mayor of Canadian from 1953 to 1957 and in the Texas House of Representatives from 1967 to 1971.

Malouf Abraham, Jr., is a retired allergist from Canadian and a patron of the arts. He has reconstructed a 14,000-square-foot (1,300 m2) former Baptist church in Canadian into an art museum known as "Citadel Garden." Malouf, Jr., and his wife, the former Therese Browne of Mount Airy, North Carolina, the mayor of Canadian from 1981 to 1991, have three sons, a part of the fourth generation of Abrahams in Canadian. Eddie Abraham is a cattle-calf rancher. Salem Abraham is a futures trader. Jason Abraham operates a large horse ranch.

All content from Kiddle encyclopedia articles (including the article images and facts) can be freely used under Attribution-ShareAlike license, unless stated otherwise. Cite this article:
Hemphill County, Texas Facts for Kids. Kiddle Encyclopedia.