Located in south central Wheeler County, Shamrock was the largest town in the county in the late 19th century. George and Dora Nickel consented to keep the first post office in their dugout there in 1890. The mail was to be carried once a week from Mobeetie. The neighbors decided to let George name the office. His Irish mother had told him always to depend on a shamrock to bring him good luck, so he suggested "Shamrock" for the name of the office. But when a mysterious fire destroyed his dugout, George Nickel's post office never opened. Mary Ruth Jones became Shamrock's first postmistress, running the Shamrock post office out of the Jones family home. In 1902 the Chicago, Rock Island and Gulf Railway set up a station in the town, calling it "Wheeler" like the county, but changing it back to the original name of Shamrock in 1903, which prompted the reopening of the Shamrock post office. By 1907, the town was competing with the towns of Story and Benonine as trade centers.

The town continued its growth as other businesses moved into the city, including the county newspaper, which moved from Story and renamed itself from the Wheeler County Texan to the Shamrock Texan, several banks, and Shamrock Cotton Oil Mill. In 1911, E. L. Woodley became the mayor of the newly incorporated city. In 1926, the discovery of oil and the operation of natural gas wells by Shamrock Gas Company helped spur the city's continuing growth. A decline in the oil industry caused the population to drop in the 1940s, but it rebounded in the next decade with the improvement of Route 66. By the 1980s, the town was home to an established modern school system, a chemical plant, oil and gas processing plants, and a hospital.

Shamrock holds an annual St. Patrick's Day observance. Astronaut Alan Bean, a native of nearby Wheeler, visited the community on March 13 as the kickoff for the 2015 ceremony. He became the fourth man to walk on the moon, a feat that he once described as "almost like I couldn't believe it myself."

According to the United States Census Bureau, the city has a total area of 2.1 square miles (5.4 km²), all of it land. 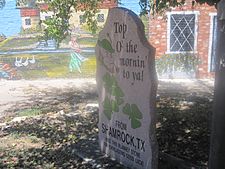 "Top O' the Mornin' to Ya'" slogan in Shamrock, Texas, which hosts an annual St. Patrick's Day observance

There were 852 households out of which 28.3% had children under the age of 18 living with them, 50.7% were married couples living together, 9.9% had a female householder with no husband present, and 35.4% were non-families. 33.0% of all households were made up of individuals and 17.6% had someone living alone who was 65 years of age or older. The average household size was 2.33 and the average family size was 2.95.

In 1936, the U-Drop Inn was built at the corner of the U.S. Route 83 and the now historic Route 66. At the time of opening, the U-Drop was the only café within 100 miles (160 km) of Shamrock, enjoying brisk business and becoming a successful establishment. Once considered a beautiful and impressive example of Route 66 architecture in Texas, the U-Drop Inn fell into disrepair with the decommissioning of Route 66. Referred to as "one of the most impressive examples" of Route 66 architecture by the Texas Historical Commission, the U-Drop Inn was added to the National Register of Historic Places in 1997. In May 1999, the First National Bank of Shamrock purchased the then closed U-Drop Inn and gave it to the city of Shamrock. With a $1.7 million federal grant, the city was able to hire a firm specializing in historical renovation to restore the building to its original glory and adapt it into a museum, visitors' center, gift shop, and the city's chamber of commerce. The revived U-Drop Inn was featured in the 2006 animated film Cars as the inspiration for the fictional Ramone's body shop. 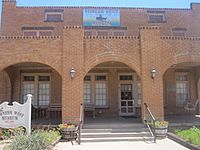 Pioneer West Museum is housed in the former Reynolds Hotel in Shamrock. 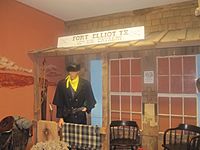 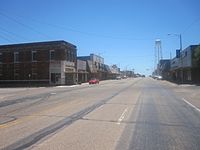 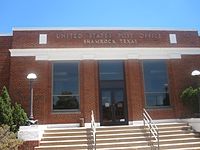 The Old Reynolds Hotel, a historic building, was saved from demolition and converted into a museum by local residents. The building with 25 rooms was turned into an exhibition hall with pioneer artifacts, typical objects of settlers, and Native American arrowheads. There are exhibits ranging from local historical objects to a space exhibit to a military history exhibit.

Two annual social gatherings are organized each year to celebrate the founder’s heritage. The Annual St. Patrick’s Celebration is held annually on the weekend closest to St Patrick’s Day. Irish Craftfest is held annually the first weekend of October at the Shamrock Area Community Center.

Location: Shamrock, Texas
Date at Project: April 2, 1999
Leap: Sam leaps into Kenneth Richardson, a young man whose older brother disappears.
Heart story: Sam discovers that if he heals an old wound between his brother and father, he can reunite the family.
Summary: It used to be a family. They used to get along. What the heck happened that caused this family to turn and fight each other? As Kenneth Richardson, Sam is tries to rebuild a broken family. But when dad is as hardheaded as son, Sam doubts that they will ever stop fighting enough to listen to each other.

All content from Kiddle encyclopedia articles (including the article images and facts) can be freely used under Attribution-ShareAlike license, unless stated otherwise. Cite this article:
Shamrock, Texas Facts for Kids. Kiddle Encyclopedia.