A shamrock with 3 leaves.

Shamrocks are the young sprigs of clover or trefoil. The shamrock is a symbol of Ireland. According to a legend, Saint Patrick used it to illustrate the doctrine of the Holy Trinity. The name shamrock is derived from Irish seamróg. This is the diminutive version of the Irish word for clover (seamair) meaning simply "little clover" or "young clover". Sometimes other three-leafed plants are called shamrocks. The shamrock can be used for its medicinal properties. It was used as a motif in Victorian days. Around March 17 (Saint Patrick's Day) small pots of shamrocks are sold. Some people wear sprigs of shamrock in a buttonhole on the holiday. 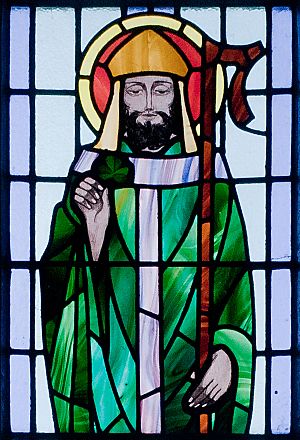 Traditionally, shamrock is said to have been used by Saint Patrick to illustrate the Christian doctrine of the Holy Trinity when Christianising Ireland in the 5th century. The first evidence of a link between St Patrick and the shamrock appears in 1675 on the St Patrick's Coppers or Halpennies. These appear to show a figure of St Patrick preaching to a crowd while holding a shamrock, presumably to explain the doctrine of the Holy Trinity.

When Saint Patrick arrived in Ireland in 431, he used the shamrock to teach pagans the Holy Trinity. In pagan Ireland, three was a significant number and the Irish had many triple deities, which could have aided St Patrick in his evangelisation efforts. Patricia Monaghan states that "There is no evidence that the clover or wood sorrel (both of which are called shamrocks) were sacred to the Celts". However, Jack Santino speculates that "The shamrock was probably associated with the earth and assumed by the druids to be symbolic of the regenerative powers of nature ... Nevertheless, the shamrock, whatever its history as a folk symbol, today has its meaning in a Christian context. Pictures of Saint Patrick depict him driving the snakes out of Ireland with a cross in one hand and a sprig of shamrocks in the other." Roger Homan writes, "We can perhaps see St Patrick drawing upon the visual concept of the triskele when he uses the shamrock to explain the Trinity". Why the Celts to whom St Patrick was preaching would have needed an explanation of the concept of a triple deity is not clear (two separate triple goddesses are known to have been worshipped in pagan Ireland).

The first written mention of the link does not appear until 1681, in the account of Thomas Dineley, an English traveller to Ireland. 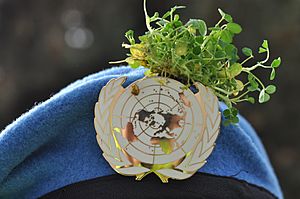 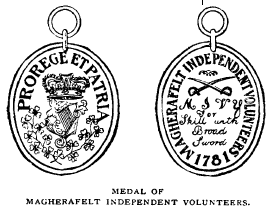 Drawing of the medal awarded to the First Magherafelt Volunteers for skill with broadsword, showing shamrocks 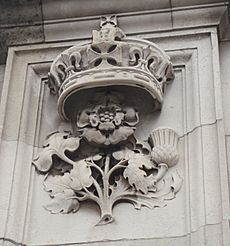 As St. Patrick is Ireland's patron saint, the shamrock has been used as a symbol of Ireland since the 18th century, in a similar way to how a rose is used for England, a thistle for Scotland and a daffodil for Wales. The shamrock first began to evolve from a symbol purely associated with St. Patrick to an Irish national symbol when it was taken up as an emblem by rival militias during the turbulent politics of the late eighteenth century. On one side were the Volunteers (also known as the Irish Volunteers), who were local militias in late 18th century Ireland, raised to defend Ireland from the threat of French and Spanish invasion when regular British soldiers were withdrawn from Ireland to fight during the American Revolutionary War. On the other side were revolutionary nationalist groups, such as the United Irishmen.

Among the Volunteers, examples of the use of the shamrock include its appearance on the guidon of the Royal Glin Hussars formed in July 1779 by the Knight of Glin, and its appearance on the flags of the Limerick Volunteers, the Castle Ray Fencibles and the Braid Volunteers. The United Irishmen adopted green as their revolutionary colour and wore green uniforms or ribbons in their hats, and the green concerned was often associated with the shamrock. The song The Wearing of the Green commemorated their exploits and various versions exist which mention the shamrock. The Erin go bragh flag was used as their standard and was often depicted accompanied by shamrocks, and in 1799 a revolutionary journal entitled The Shamroc briefly appeared in which the aims of the rebellion were supported. 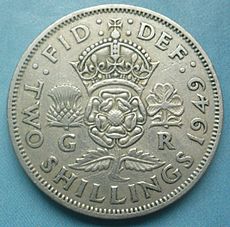 Since the 1800 Acts of Union between Britain and Ireland the shamrock was incorporated into the Royal Coat of Arms of the United Kingdom, depicted growing from a single stem alongside the rose of England, and the thistle of Scotland to symbolise the unity of the three kingdoms. Since then, the shamrock has regularly appeared alongside the rose, thistle and (sometimes) leek for Wales in British coins such as the two shilling and crown, and in stamps. The rose, thistle and shamrock motif also appears regularly on British public buildings such as Buckingham Palace.

Throughout the nineteenth century the popularity of the shamrock as a symbol of Ireland grew, and it was depicted in many illustrations on items such as book covers and St. Patrick's Day postcards. It was also mentioned in many songs and ballads of the time. For example, a popular ballad called The Shamrock Shore lamented the state of Ireland in the nineteenth century. Another typical example of such a ballad appears in the works of Thomas Moore whose Oh the Shamrock embodies the Victorian spirit of sentimentality. It was immensely popular and contributed to raising the profile of the shamrock as an image of Ireland: 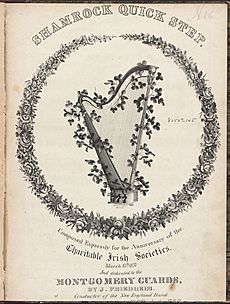 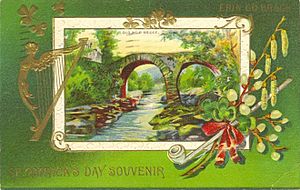 Oh The Shamrock
-
Through Erin's Isle,
To sport awhile,
As Love and Valor wander'd
With Wit, the sprite,
Whose quiver bright
A thousand arrows squander'd.
Where'er they pass,
A triple grass
Shoots up, with dew-drops streaming,
As softly green
As emeralds seen
Through purest crystal gleaming.
Oh the Shamrock, the green immortal Shamrock!
Chosen leaf
Of Bard and Chief,
Old Erin's native Shamrock!

Throughout the nineteenth and twentieth centuries, the shamrock continued to appear in a variety of settings. For example, the shamrock appeared on many buildings in Ireland as a decorative motif, such as on the facade of the Kildare Street Club building in Dublin, St. Patrick's Cathedral, Armagh, and the Harp and Lion Bar in Listowel, Co. Kerry. It also appears on street furniture, such as old lamp standards like those in Mountjoy Square in Dublin, and on monuments like the Parnell Monument, and the O'Connell Monument, both in O'Connell Street, Dublin. Shamrocks also appeared on decorative items such as glass, china, jewellery, poplin and Irish lace. Belleek Pottery in Co. Fermanagh, for example, regularly features shamrock motifs.

All content from Kiddle encyclopedia articles (including the article images and facts) can be freely used under Attribution-ShareAlike license, unless stated otherwise. Cite this article:
Shamrock Facts for Kids. Kiddle Encyclopedia.