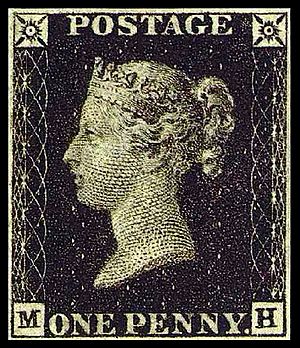 The British Penny Black is generally acknowledged as the world's first postage stamp.

The postal history of the United Kingdom is notable in at least two respects- first, for the introduction of postage stamps in 1840, and secondly for the establishment of an efficient postal system throughout the British Empire, laying the foundation of many national systems still in existence today.

The story begins in the 12th century with Henry I, who appointed messengers to carry letters for the government. It is estimated that between 1100 and 1135, 4,500 letters were carried by these messengers. At this time, private individuals had to make their own arrangements. Henry III provided uniforms for the messengers, and Edward I instituted posting houses where the messengers could change horses. The reign of Edward II saw the first postal marking; handwritten notations saying "Haste, post haste". 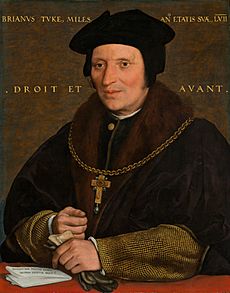 Brian Tuke was the first Master of the posts

Henry VIII created the Royal Mail in 1516, appointing Brian Tuke as "Master of the Postes", while Elizabeth I appointed Thomas Randolph as "Chief Postmaster". Under Thomas Witherings, chief postmaster under Charles I, the Royal Mail was made available to the public (1635), with a regular system of post roads, houses, and staff. From this time through to the postal reforms of 1839 - 1840 it was most common for the recipient to pay the postage, although it was possible to prepay the charge at the time of sending.

In 1661, Charles II made Henry Bishop the first Postmaster General. In answer to customer complaints about delayed letters, Bishop introduced the Bishop mark, a small circle with month and day inside, applied at London, in the General Post office and the Foreign section, and soon after adopted in Scotland, (Edinburgh), and Ireland, (Dublin). In subsequent years, the postal system expanded from six roads to a network covering the country, and post offices were set up in both large and small towns, each of which had its own postmark.

In 1680 William Dockwra established the London Penny Post, a mail delivery system that delivered letters and parcels weighing up to one pound within the city of London and some of its immediate suburbs for the sum of one penny. 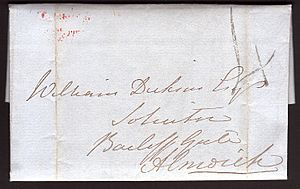 Second day use of Uniform Fourpenny Post with Edinburgh handstruck 4

The Great Post Office Reform of 1839 and 1840 was championed by Rowland Hill, often credited with the invention of the postage stamp, as a way to reverse the steady financial losses of the Post Office. Hill convinced Parliament to adopt the Uniform Fourpenny Post whereby a flat 4d per ½oz rate (equivalent to 10s 8d/pound for heavier items) was charged regardless of distance.

December 1839-letters could arrive at any address in the United Kingdom: The rate went into effect on 5 December 1839 but only lasted for 36 days. This was immediately successful, and on 10 January 1840 the Uniform Penny Post started, charging only 1d for prepaid letters and 2d if the fee was collected from the recipient. Fixed rates meant that it was practical to avoid handling money to send a letter by using an "adhesive label", and accordingly, on May 6, the Penny Black became the world's first postage stamp in use.

After more than 2,000 suggestions were submitted, Rowland Hill chose the method and printer, and worked by trial and error to achieve the required result. He decided to go with Perkins, Bacon & Petch, “a firm of bank-note printers, to carry out the work by the process of steal engraving, and the head of the Queen as engraved by William Wyon for a special medal struck to celebrate Her Majesty’s official visit to the City of London in the year of her Coronation.”

The stamp was originally for use only within the United Kingdom of Great Britain and Ireland and as such was, in effect, a local stamp. For this reason the name of the country was not included within the design, a situation which continued by agreement with foreign post offices, provided the sovereign's effigy appeared on the stamp. Envelopes sold with postage paid did not include this, so were marked with the country's name. In 1951, the special commemorative issue for the Festival of Britain included the name "Britain" incidentally. It could therefore be said that the name of the country then appeared for the first time on a stamp of the UK, although the word "British" had appeared on British Empire Exhibition commemorative stamps of 1924.

After the stamp was circulating, it became obvious that black was not a good choice of stamp colour, since any cancellation marks were hard to see. So from 1841 onwards, the stamps were printed in a brick-red colour. The Penny Reds continued in use for decades with about 21 billion being produced.

The Victorian age saw an explosion of experimentation. The inefficiency of using scissors to cut stamps from the sheet inspired trials with rouletting (the Archer Roulette), and then with perforation, which became standard practice in 1854. In 1847, the (octagonal) 1 shilling (£0.05) became the first of the British embossed postage stamps to be issued, followed by 10d stamps the following year, and 6d (£0.025) values in 1854.

Surface-printed stamps first appeared in the form of a 4d stamp in 1855, printed by De La Rue, and subsequently became the standard type. ½d (halfpenny) and 1½d (penny halfpenny - pronounced pennyhaypny or threehaypence) engraved stamps issued in 1870 were the last engraved types of Queen Victoria; the next would not appear until 1913. Surface-printed stamps of the 1860s and 1870s all used the same profile of Victoria, but a variety of frames, watermarks, and corner lettering.

Meanwhile, the age of the Penny Reds had come to an end along with the Perkins Bacon printing contract. The new low values were also surface-printed: first was a penny stamp coloured Venetian red in a square frame, issued in 1880. However, the passage of the Customs and Inland Revenue Act 1881 necessitated new stamps valid also as revenue stamps, and so the Penny Lilac was issued in that year, inscribed "POSTAGE AND INLAND REVENUE". This stamp remained the standard letter stamp for the remainder of Victoria's reign, and vast quantities were printed. Later issues were inscribed POSTAGE & REVENUE which became the more familiar POSTAGE REVENUE.

1883 and 1884 saw experimentation with stamps using fugitive inks with the 'Lilac and Green Issue'. These were rather plain designs, low values in lilac and high values in green, because those were the only colours available. They succeeded in their purpose - relatively few of the stamps survived usage, their colours fading away when soaked from the envelope - but they were not liked by the public.

The last major issue of Victoria was the "Jubilee issue" of 1887, a set of twelve designs ranging from ½d. to 1s., most printed in two colours or on coloured paper. (Although issued during the Jubilee year, they were not issued specifically for the occasion, and are thus not commemoratives.)

When Edward VII succeeded to the throne, new stamps became necessary. The approach was very conservative, however most of the Jubilee frames were reused and the image of the King was still a single profile. Edward's reign was fairly short and there were no major changes of design as a result. chalk-surfaced paper was introduced during this time. (This type of paper can be detected by rubbing the surface with silver, which leaves a black mark.)

By contrast, the stamps of George V were innovative from the very first. The first issue made was of the ½d and 1d values, which were in the same colours as used in the previous reign. Although the main design feature remained the same – a central ellipse for the portrait, an ornamental frame, value tablet at the base and a crown at the top – a three quarter portrait was used for the first time. However, subsequent designs reverted to the standard profile.

The UK's first commemorative stamps were issued for the British Empire Exhibition in 1924. The pair of large-format stamps featured a lion in an imposing stance; they were issued twice, in 1924 and then in 1925, the stamps of each year being inscribed with the year of issue. A second set of commemoratives in 1929 marked the 9th Congress of the Universal Postal Union (UPU), held in London that year.

Independence of the Irish Free State

Following the Anglo-Irish Treaty of 1921, responsibility for posts and telegraphs transferred to the new Provisional Government. Upon the formal independence of the Irish Free State in December 1922, and then transferred to the Free State Government. A Postmaster General was initially appointed by the Free State Government, being replaced by the office of Minister for Posts and Telegraphs in 1924. An early visible manifestation was the repainting of all post boxes green instead of red, plus the overprinting of British postage stamps prior to the introduction of Irish stamps.

A set of four stamps was issued in 1936 for Edward VIII before he abdicated. George VI's coronation was marked with a commemorative: part of an omnibus issue which included every colony in the Empire. New definitives featured a profile of the King on a solid colour background, based on a plaster cast by Edmund Dulac. This was a precursor of the Machins three decades later: see below.

The century of the postage stamp was celebrated in 1940 with a set of six stamps depicting Victoria and George VI side-by-side. By the following year, wartime exigencies affected stamp printing, with the 1937 stamps being printed with less ink, resulting in significantly lighter shades. Post-war issues included commemoratives for the return of peace, the Silver Jubilee and the 1948 Summer Olympics in 1948, and the 75th anniversary of the UPU, in 1949. 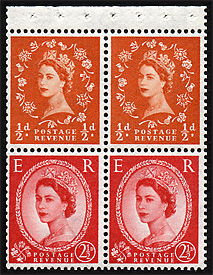 When Elizabeth II succeeded her father in 1952, new stamps were needed. A collection of variations on a theme that came to be known as the Wilding issues, based on a portrait of Queen Elizabeth II was the result. This portrait was by photographer Dorothy Wilding.

Wildings were used until 1967, when the Machin issues were introduced on 5 June. The Machin design is very simple, a profile of the Queen on a solid colour background, and very popular, still being the standard British stamp. They have been printed in scores of different colours; in addition, decimalisation required new denominations, and there have technical improvements in the printing process, resulting in literally hundreds of varieties known to specialists.

Today, the postage stamp is used in many countries and once colonies of Great Britain. Once colonised countries of Great Britain at one point all used the Penny Black portrait of Queen Victoria, such as Barbados, Nevis, Fiji, Trinidad, British Guiana, and India. Many formerly colonized countries still support a portrait of Queen Elizabeth, although some have branched out to stamps depicting scenery, birds or beasts.

Up to the 1950s, British commemorative stamps were few and far between; most of the stamps were definitive issues in which the portrait of the reigning monarch was the dominant element. Even after commemorative stamps began to appear more often during the 1950s and early 1960s, the monarch's effigy was prominent, usually taking up a quarter to a third of the stamp's design, which limited flexibility and creativity. A change came in 1965 when the then Postmaster General Tony Benn issued new criteria for what could appear on stamps. Designer David Gentleman wrote to Benn about alternative design approaches, suggesting the monarch's head be replaced by another national symbol, such as a Crown or the country name; "Great Britain" or "United Kingdom". A compromise, a small silhouette of the Queen based on the coinage head of Mary Gillick, was accepted and this has been the standard ever since for commemorative stamps. When the monarch's portrait is part of the stamp's main design (as for example in the case of issues commemorating the Queen's birthday), then the silhouette is not needed and usually does not appear.

The United Kingdom has introduced postal services throughout the world and has often made use of British definitives bearing local overprints.

All content from Kiddle encyclopedia articles (including the article images and facts) can be freely used under Attribution-ShareAlike license, unless stated otherwise. Cite this article:
Postage stamps and postal history of Great Britain Facts for Kids. Kiddle Encyclopedia.