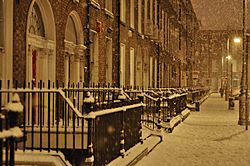 The south side of Mountjoy Square, in the snow of January 2010

Mountjoy Square (Irish: Cearnóg Mhuinseo) is a Georgian garden square in Dublin, Ireland, on the north side of the city just under a kilometre from the River Liffey. One of five Georgian squares in Dublin, it was planned and developed in the late 18th century by the Luke Gardiner, 1st Viscount Mountjoy. It was surrounded on all sides by terraced, red-brick Georgian houses. Construction began in the early 1790s and the work was completed in 1818.

Over the centuries, the square has been home to many of Dublin's most prominent people: lawyers, churchmen, politicians, writers and visual artists. The writer James Joyce lived around the square during some of his formative years, playwright Seán O'Casey wrote and set some of his most famous plays on the square while living there, W.B. Yeats stayed there with his friend John O'Leary, and more recently, much of the Oscar-winning film Once was made in the square. Historic meetings have taken place there, including planning for the Easter Rising and some of the earliest Dáil meetings. Prominent Irish Unionists and Republicans have shared the square.

Mountjoy can boast being Dublin's only true Georgian square, each of its sides being exactly 140 metres in length. While the North, East and West sides each have 18 houses, the South has 19, reflecting some variation in plot sizes. Though each side was originally numbered individually, the houses are now numbered continuously clockwise from no. 1 in the north-west corner. While its North and South sides are continuous from corner to corner, the East and West sides are in three terraces, interrupted by two side streets, Grenville Street and Gardiner Place to the West and Fitzgibbon and North Great Charles Street to the East. Gardiner Street passes through the West side of the square, while Belvidere Place and Gardiner Lane run off the North- and South-East corners.

Although some of the original buildings fell to ruin over the 20th century and were eventually demolished, the new infill buildings were fronted with reproduction façades, so each side of the square maintains its appearance as a consistent Georgian terrace.

Development of the square 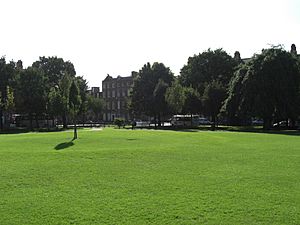 Mountjoy Square Park, facing towards a house connected to WB Yeats, on the south-west corner

The first Luke Gardiner (died 1755) was a highly successful banker, developer and Member of Parliament for Dublin in the early 18th century. During his career he acquired a wide variety of properties throughout the city. The major continuous part, much of which he purchased from the Moore family in 1714, was a large piece of land to the East of the then established city. This estate corresponds to the modern area bounded by The Royal Canal, Dorset Street, the Western Way, Constitution Hill, Parnell Street, O'Connell Street and the River Liffey. As owner of this land, Gardiner led the development of the Northside of the city east along the river, developing what is now O'Connell Street (then Sackville Street), Dorset Street, Parnell Street and Square (then Rutland Street & Square). After his death, his son and heir Charles continued the development, finishing Rutland Square before his grandson, the second Luke Gardiner (later Lord and Viscount Mountjoy) inherited the estate and accelerated the development further East. A powerful figure, Luke II was a member of the Wide Streets Commission and MP for County Dublin.

Mountjoy square was developed as part of this third development phase. An early plan and elevation, known then as Gardiner Square was drawn up in 1787 by Thomas Sherrard, surveyor to the Wide Streets Commissioners. Gardiner and Sherrard had an ambitious vision for the square. It was on high ground, so all streets off it led downhill. It overlooked The Custom House and was connected to it by Gardiner Street. The plan included a rebuilt St. George's Church in the centre of the park. The original West side plans show a palatial stone-clad street frontage with a terrace of brick residential houses behind the cladding. A less ambitious compromise of red-brick façades, consistent with other nearby streets, eventually prevailed.

The square was laid out and construction began first on the south side, about 1790, continuing until 1818. The stuccadore Michael Stapleton was one of the first to acquire leases (dated October 1789), corresponding to Nos. 43, 44 and 45 Mountjoy Square (all demolished in the 1980s, despite the presence of Stapleton's decoration). His houses were complete by 1793. Luke Gardiner II was killed at the Battle of New Ross during the Rebellion of 1798 with the third side still under construction.

After completion, contemporaries Warburton, Whitelaw and Walsh said of it:

The square's own park has both playing areas for football, basketball and table tennis, playgrounds for children and a green park area. It's also a short walk to the Blessington Street Basin in Broadstone.

During 2010 as part of the preparation by Dublin City Council of their City Development Plan, they received a number of letters from internationally renowned people calling for Mountjoy Square to be designated as an Architectural Conservation Area (ACA).

On 14 May 2012 a meeting of Dublin City Council formally established Mountjoy Square as an Architectural Conservation Area.

ACA designation gives protection to the entire streetscape of the square. Works to any building in the area now require the permission of the Planning Authority, whether the building is a Protected Structure (Listed Building) or not. Dublin City Council Mountjoy Square ACA Document is included in the external links below.

Close to the centre of Dublin city and having the major artery Gardiner Street as its West side, Mountjoy Square has considerable transport links in its immediate locality.

The Dublin Bus termini for the 7, 7b, 7d, 8 and 46e are on the north side of the square and run toward the south east of the city. Routes 33, 41, 41b and 41c stop on the west side of the square on their way to the northern suburbs. The square is also stop covered by the hop-on, hop-off city centre 50 cent fare. The 41 bus is almost certainly the cheapest transport link to Dublin Airport from the city at €1.80 (in 2010) from the square. The main entrance to Dublin Bus' Summerhill Depot is on Mountjoy Place, just off the south-east corner of the square. 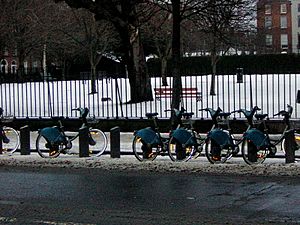 In 2009, the Dublin Bikes bicycle sharing system was launched and has one of its more northerly stations on the west side of Mountjoy Square, providing easy access for commuters, locals, and tourists.

In 2013 a similar pay-as-you-go car hire scheme stationed a car on the square. The "Go-Car" is parked on Mountjoy Square West.

Over the centuries, new features have been added to the street furniture while for various reasons others have been removed.

The street was originally paved with granite. By now, although the kerbs are generally still (probably Wicklow) granite, most of the paving stones have been replaced with concrete. The exception to this is the south-west corner in front of 53–54 which still has full granite paving.

Many of the houses on the square still have their original coal holes and ornate cast iron covers. These small holes in the street outside each house lead to a coal house underneath the street. These elegantly solved the problem of how to quickly and cleanly deliver coal to the house, allowing the coal men to simply pull the hole open and empty their sacks of coal down through it hole. The basement of the house then had a doorway into the coal house, under the street.

The street lamps on the square are of two different designs. Those on the outer sides, in front of the houses are seemingly of the style called The Scotch Standard, dating from 1903 to 1920 when Dublin streets were being electrically lit as part of the Pigeon House scheme. On the inner (park) side of the street, a slightly more modest design is used, apparently consistent with a more recent 1940–50 design. These designs are all 9 metres tall.

In the late 18th century, mud streets were not uncommon and horses were also common on streets. To avoid this muck being tramped into the houses, Boot Scrapers were commonly placed outside their front doors. Many of these were highly elaborate and many remain to this day.

All content from Kiddle encyclopedia articles (including the article images and facts) can be freely used under Attribution-ShareAlike license, unless stated otherwise. Cite this article:
Mountjoy Square Facts for Kids. Kiddle Encyclopedia.