The Liffey (An Life in Irish) is a river in Ireland. It flows through the centre of Dublin. The river supplies much of Dublin's water. Major rivers that flow into the Liffey are the River Dodder, the River Poddle and the River Camac.

The river was called An Ruirthech, meaning "fast (or strong) runner" before it was called Liffey. The word Liphe (or Life) was the name of the plain (flat area of land) through which the river flowed but was later used to name the river itself. It was also known as the Anna Liffey, possibly because of the Irish for "River Liffey" - Abhainn na Life which sounds like "Anna Liffey" in English.

The Liffey starts with a lot of small streams in the Liffey Head Bog between Kippure and Tonduff in the Wicklow mountains. It flows for around 125 km (78 mi) through counties Wicklow, Kildare and Dublin. It flows into the Irish Sea at the mid-point of Dublin Bay. Most of its length is in Kildare.

The Liffey has a lot of tributaries (rivers that flow into it). Its major tributaries include the King's River, River Dodder, the River Poddle and the River Camac.

The Liffey does not have any natural lakes, and has only a few islands. There are a few areas with rapids, mostly as the river comes close to Dublin city.

There are dams built for three hydroelectric power stations along the river, at Poulaphouca, Golden Falls and Leixlip. A large reservoir is built at Poulaphouca.

Towns along the river include Ballymore Eustace, Athgarvan, Kilcullen, Newbridge, Caragh, Clane, Celbridge, Leixlip and Lucan before the river reaches the city of Dublin as it approaches its mouth. 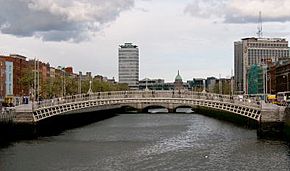 The River Liffey in Dublin city was used for many centuries for trade. The Vikings already used the river, and it was used until recent times. It is connected to the River Shannon via the Grand Canal and the Royal Canal. This connects Dublin to the west of Ireland by water.

Around 60% of the Liffey's flow is used for drinking water, and to supply industry. Much of this makes its way back into the river after it is cleaned in wastewater treatment plants. A popular myth is that Liffey water is used to make Guinness beer, but this is not true. Guinness uses water piped from the Wicklow mountains. 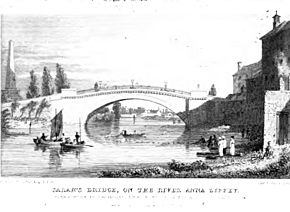 "Sarah's Bridge on the River Anna Liffey" (1831) Sarah's Bridge is today called Island Bridge. The then-new Wellington Monument in Phoenix Park is seen on the left of the picture.

The Lady Patricia and Miranda Guinness were cargo ships that were used to export Guinness from the St. James's Gate Brewery. They were well-known sight on the Liffey up to the 1990s.

In recent years, the only regular traffic on the river within the city is a boat which runs guided tours along the River Liffey through Dublin City centre. Downstream of the East-Link bridge, the river is still mainly used for commercial and ferry traffic.

Recreational use in Dublin

The river is used by private, university and Garda rowing clubs in Chapelizod. The Liffey Descent canoeing event covers a 27 km (17 mi) course from Straffan to Islandbridge. That race has been held every year since 1960. The Liffey Swim takes place every year in late August or early September between Watling Bridge and The Custom House.

The earliest stone bridge over the Liffey was the Bridge of Dublin. It was built by the Dominicans in 1428. It survived well into the 18th century. It replaced an earlier wooden bridge (Dubhghalls Bridge) on the same site. Island Bridge was added in 1577.

When Dublin became important for business in the 17th century, 4 new bridges were added between 1670 and 1684. They were Barrack, or Bloody Bridge, (what is now Rory O'More Bridge), Essex Bridge (Grattan Bridge), Ormond Bridge (O'Donovan Rossa Bridge) and Arran Bridge.

The oldest bridge still standing is the Mellows Bridge. It was built in 1764 after the Arran Bridge (which was there before) was destroyed by floods in 1763.

The first iron bridge was the elegant Ha'penny Bridge built in 1816. The newest bridge is the Samuel Beckett Bridge opened in December 2009. It is a suspension bridge, it can move to allow river traffic to pass.

The river divides the Northside from the Southside of Dublin. It has a lot of bridges, mostly open for vehicular traffic (cars, trucks, buses etc.). Large bridges are the West-Link Bridge on the M50 motorway, the Seán Heuston Bridge and O'Connell Bridge.

There are 3 foot bridges in the city: the Millennium Bridge, the Seán O'Casey Bridge and the Ha'penny Bridge.

Bridges outside of Dublin include the Liffey Bridge at Celbridge, "The Bridge at 16" (a 19th century pedestrian suspension bridge), and the Leinster Aqueduct - which takes the Grand Canal over the Liffey at Caragh.

All content from Kiddle encyclopedia articles (including the article images and facts) can be freely used under Attribution-ShareAlike license, unless stated otherwise. Cite this article:
River Liffey Facts for Kids. Kiddle Encyclopedia.