County Wicklow ( WIK-loh; Irish: Contae Chill Mhantáin) is a county in Ireland. The last of the traditional 32 counties, having been formed as late as 1606, it is part of the Mid-East Region and the traditional province of Leinster. It is bordered by the Irish Sea to the east and the counties of Wexford to the south, Carlow to the southwest, Kildare to the west, and Dublin to the north.

Wicklow is named after its county town of Wicklow, which derives from the name Víkingaló (Old Norse for "Vikings' Meadow"). Wicklow County Council is the local authority for the county, which had a population of 142,425 at the 2016 census[update]. Colloquially known as the "Garden of Ireland" for its scenery—which includes extensive woodlands, nature trails, beaches, and ancient ruins while allowing for a multitude of walking, hiking, and climbing options—it is the 17th largest of Ireland's 32 counties by area and the 16th largest by population. It is also the fourth largest of Leinster's 12 counties by size and the fifth largest in terms of population.

The Wicklow Mountains range is the largest continuous upland region in Ireland. The highest mountain in the range, Lugnaquilla, rises to 925 metres (3,035 ft), making Wicklow the second-highest county peak after Kerry. The Wicklow Way is the oldest waymarked long-distance walking trail in Ireland, and the area is a popular attraction, as the region offers multiple choices of recreation including fishing before discharging into the Irish Sea at Arklow. The River Slaney is in the western part of the county, bordering County Carlow. The Turlough Hill pumped-storage scheme, a significant civil engineering project, was carried out in the mountains in the 1960s and 1970s. The lakes are small but numerous, located mainly in mountain valleys or glacial corries. They include Lough Dan, Lough Tay, Lough Brae, the lakes of Glendalough as well as the Poulaphouca reservoir (the largest by volume). 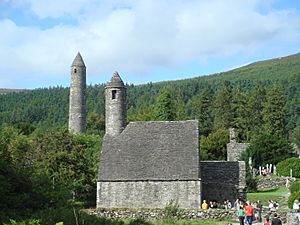 County Wicklow was the last of the traditional counties of Ireland to be shired in 1606 from land previously part of counties Dublin and Carlow. Established as a distinct county, it was aimed at controlling local groups such as the O'Byrnes. The Military Road, stretching from Rathfarnham to Aghavannagh crosses the mountains, north to south, was built by the British Army to assist them in defeating the rebels still active in the Wicklow Mountains following the failed 1798 rebellion. It provided them with access to an area that had been a hotbed of Irish rebellion for centuries. Several barracks to house the soldiers were built along the route and the Glencree Centre for Peace and Reconciliation was built alongside the remains of barracks there. Battalions of the Irish Army use firing ranges in County Wicklow for tactical exercises, especially the largest one in the Glen of Imaal which was previously used by the British Army prior to independence.

The ancient monastery of Glendalough is located in County Wicklow. During the Cromwellian invasion of Ireland, local authorities immediately surrendered without a fight. During the 1798 rebellion, some of the insurgents took refuge in the Wicklow Mountains, resulting in clashes between British troops and the troops commanded by General Joseph Holt (1756–1826) near Aughrim and later at Arklow. 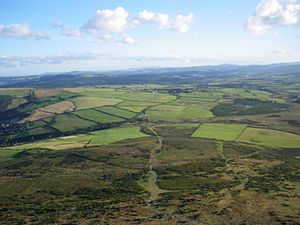 Mermaid, County Wicklow Arts Centre is based in Bray. Mermaid is the county's hub of artistic activity and creation, offering a programme in many art forms: visual arts, theatre productions, opera, dance performances, arthouse cinema, comedy and a music programme. Two of the county's festivals take place in Arklow, the Arklow music Festival and the Arklow Seabreeze Festival.

The county is a popular film-making location in Ireland. Bray is home to Ardmore Studios, where many of Ireland's best known feature films, including John Boorman's Excalibur and Zardoz, Jim Sheridan's Oscar-winning In the Name of the Father, and several Neil Jordan films, have been shot. The BBC series Ballykissangel was also filmed in County Wicklow. Scenes from the movie P.S. I Love You were shot in the Wicklow Mountains National Park while several scenes from other movies, from Barry Lyndon to Haywire, have been filmed in the county. 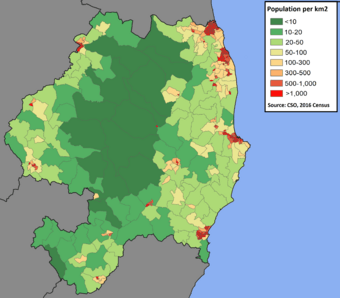 Wicklow's population is primarily concentrated along the east coast

As of the 2016 census, the resident population of Wicklow was 142,425, a 4.2% increase since the Census of Ireland 2011. The county's population is one of the fastest growing in the country, increasing 38.7 percent in the 20 years between 1996 and 2016. However, its share of the Mid East's population has steadily fallen as Meath and Kildare have experienced even more rapid population growth. While Bray remains by far the largest town in the county, improved transport links to Dublin such as upgrades to the M11 and the completion of the M50 in 2005 encouraged the growth of towns further south. Between 2002 and 2016 Bray grew by 5.3 percent. By contrast, over the same period Arklow grew by 32.2 percent, Greystones grew by 53.3 percent and Rathnew grew by 133.9%.

The most densely populated areas of the county are concentrated in the northeast, with over 50 percent of Wicklow's residents living within 15 kilometres (9 mi) of the Dublin border. Many of the county's largest urban areas are clustered in this region along an axis stretching from Bray to Newtownmountkennedy, which incorporates Greystones, Delgany, Enniskerry, Kilmacanogue, Kilpedder and Kilcoole. Outside of this region, Wicklow, Rathnew and Arklow are the only sizable towns in the eastern portion of the county, while Blessington is the only large settlement in west Wicklow.

The county's interior is very sparsely populated, with only a few small settlements located in the foothills of the Wicklow Mountains such as Rathdrum, Laragh, Roundwood and Tinahely. Most small areas in central Wicklow have a population density of less than 20 people per km2, compared with an average of 70 people per km2 in the county as a whole.

Asians were the second largest ethnic group, comprising 1.6% of the county's population, followed by mixed race or other backgrounds at 1.2%. Just over 2,300 people (1.6%) did not state their ethnicity.

Accounting for just 0.4% of the population, Wicklow has by far the lowest percentage of black residents in the Greater Dublin Area. The 2016 census recorded 524 black residents in Wicklow, of which 408 (78%) were of African descent and 116 (22%) were of other black backgrounds. 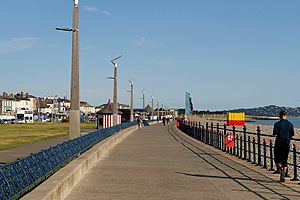 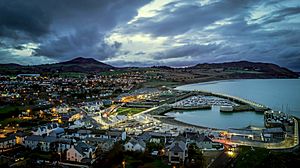 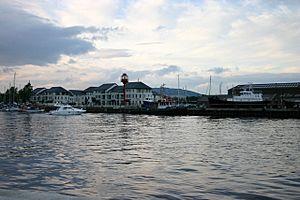 The 2016 census recorded that 65 percent of Wicklow's residents lived in urban areas (towns with a population greater than 1,500) and 35 percent lived in rural areas. Of Wicklow's rural population, roughly 26 percent (36,800 people) live in the open countryside outside of any designated settlements, while 9 percent (13,032 people) live in towns or villages with less than 1,500 people. According to the CSO report Urban and Rural Life in Ireland 2019, Wicklow (alongside Kildare) has the highest proportion of residents living in satellite towns.

The 10 largest settlements in the county are listed below. The county town is marked in bold.

People born in the United Kingdom are by far the largest immigrant group, comprising 5.9% of Wicklow's population (8,388 people). Of this group, only around half (4,045 people) stated that they were either UK or dual Irish-UK citizens. The Poles are the second largest immigrant group, constituting 2.0% of the county's population. The census recorded 2,905 Polish citizens in Wicklow, of which 2,759 were born in Poland. The fastest growing major immigrant groups between 2011 and 2016 were Romanians, Indians and Filipinos. There was also a large increase in the number of Brazilians (+107%), Italians (+59%) and Spaniards (+53%) living in Wicklow over this period. 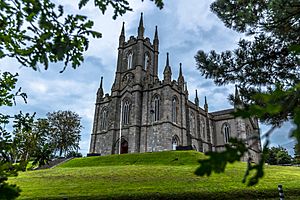 The single largest religious denomination in 2016 was the Roman Catholic Church, with 103,947 adherents. This is a 4.4% decrease from the 2011 census. Catholicism in Wicklow reached its peak percentage in the 1961 census, when 87.5% of the population identified as Catholic. As of 2016, Wicklow is the second least Catholic county in the State, and among the most irreligious.

Other Christian denominations comprised 8.8% of the population. As a proportion of population, Wicklow has the largest Church of Ireland affiliation of any county in the Republic of Ireland, at 6.2%, although this figure was historically much higher. The 1901 census recorded that just under 20% of Wicklow's population was affiliated with the Church of Ireland. In 2016 Greystones had the highest percentage of Protestants in the State (10.5%), and was also Ireland's least religious town, with 18.3% of residents stating they did not follow any religion.

Just over 0.5% of the population adhered to smaller Protestant denominations such as Presbyterian, Apostolic and Pentecostal. A further 1.05% of respondents stated that they were "Christian" but did not specify any denomination. Eastern Orthodox is the fastest growing of the major Christian denominations, increasing from 840 adherents in 2011 to 1,317 in 2016, a 56.7% increase.

The largest non-Christian religions were Islam (0.4%) and Hinduism (0.16%). All other stated religions constituted 2.5% of the population, and 1.8% of respondents did not state their religion.

Wicklow is home to several major water supply and hydroelectric facilities. The Turlough Hill pumped-storage scheme, a significant civil engineering project, was carried out in the mountains in the 1960s and 1970s.

Wicklow, often called "The Garden of Ireland", has been a popular tourist destination for many years, due to its scenery, beaches, walking, hiking and climbing options, and attractions including the ruins of the monastic city of Glendalough, Wicklow Gaol and water-based activities on reservoirs and the coast.

The Wicklow Way is the oldest waymarked long-distance walking trail in Ireland.

The popular annual mass participation bike ride Wicklow 200 has taken place in the county every year since 1982. 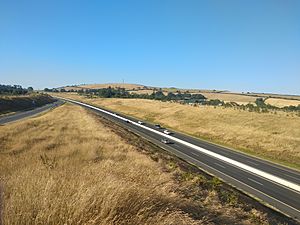 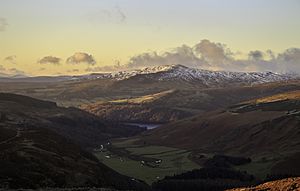 View from the Sally Gap along the R759

The county is also serviced by a National secondary road (N81) in western Wicklow, and a National primary road (N11) in eastern Wicklow which becomes a motorway at Junction 14 north of Ashford. The N11/M11 is the main route used by Wicklow commuters heading northbound to Dublin. Southbound traffic can also be heavy on weekends due to the influx of Dublin visitors into Wicklow and Wexford.

All content from Kiddle encyclopedia articles (including the article images and facts) can be freely used under Attribution-ShareAlike license, unless stated otherwise. Cite this article:
County Wicklow Facts for Kids. Kiddle Encyclopedia.