Kids Encyclopedia Facts
This page is about the Irish town. For other uses, see Wexford (disambiguation).

Wexford (Irish: Loch Garman) is the county town of County Wexford, Ireland. Wexford lies on the south side of Wexford Harbour, the estuary of the River Slaney near the southeastern corner of the island of Ireland. The town is linked to Dublin by the M11/N11 National Primary Route, and the national rail network connects it to Rosslare Europort. It has a population of 19,913 (20,072 with environs) according to the 2011 census. 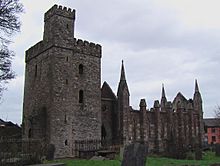 The town was founded by the Vikings in about 800 AD. They named it Veisafjǫrðr, meaning "inlet of the mud flats", and the name has changed only slightly into its present form. "Veisa" in modern Norwegian means "Way". So 'Veisafjǫrðr' could have meant "inlet of the way" or "Way Fjord". According to a local legend, the town got its Irish name, Loch Garman, from a young man named Garman Garbh who was drowned on the mudflats at the mouth of the River Slaney by flood waters released by an enchantress. The resulting loch was thus named Loch Garman.

For about three hundred years it was a Viking town, a city state, largely independent and owing only token dues to the Irish kings of Leinster. However, in May 1169 Wexford was besieged by Dermot MacMurrough, King of Leinster and his Norman ally, Robert Fitz-Stephen. The Norse inhabitants resisted fiercely, until the Bishop of Ferns persuaded them to accept a settlement with Dermot.

Wexford was an Old English settlement in the Middle Ages. An old dialect of English, known as Yola, was spoken uniquely in Wexford up until the 19th century. The Yola name for Wexford was Weiseforthe.

Following the Crusades, the Knights Templar had a presence in Wexford. Up to the present, their name is perpetuated in the old Knights' Templars' chapel yard of St. John's Cemetery, on Wexford's Upper St. John's Street.

County Wexford produced strong support for Confederate Ireland during the 1640s. A fleet of Confederate privateers was based in Wexford town, consisting of sailors from Flanders and Spain as well as local men. Their vessels raided English Parliamentarian shipping, giving some of the proceeds to the Confederate government in Kilkenny. As a result, the town was sacked by the English Parliamentarians during the Cromwellian conquest of Ireland in 1649. Many of its inhabitants were killed and much of the town was burned. In 1659 Solomon Richards was appointed Governor, but he was dismissed and imprisoned following the Restoration the next year. 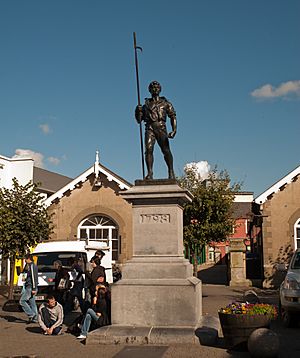 County Wexford was the centre of the 1798 rebellion against British rule. Wexford town was held by the rebels throughout the Wexford Rebellion and was the scene of a notorious massacre of local loyalists by the United Irishmen, who executed them with pikes on Wexford bridge. 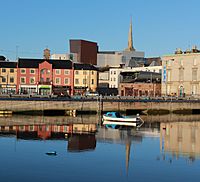 Wexford opera house amongst other buildings 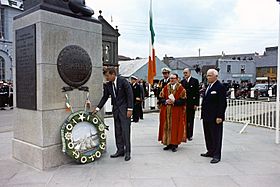 Redmond Square, near the railway station, commemorates the elder John Edward Redmond (1806–1865) who was Liberal MP for the city of Wexford. The inscription reads: "My heart is with the city of Wexford. Nothing can extinguish that love but the cold soil of the grave." His nephew William Archer Redmond (1825–1880) sat as an MP in Isaac Butt's Home Rule Party from 1872 until 1880. Willie Redmond sat as an MP for Wexford from 1883 until 1885. The younger John Redmond, was a devoted follower of Charles Stewart Parnell and leader of the Irish Parliamentary Party until his death in April 1918. He is interred in the Redmond family vault, at the old Knights' Templars' chapel yard of St. John's Cemetery, Upper St. John's Street.

Redmond Park was formally opened in May 1931 as a memorial to Willie Redmond, who died in 1917 while serving with the 16th (Irish) Division during the Messines offensive and was buried on the Western Front.

Wexford has a number of music and drama venues including:

The National Lottery Skyfest was held in Wexford in March 2011 included a pyrotechnic waterfall on the towns main bridge spanning 300m. Buí Bolg also performed on the night.

Until the mid-nineteenth century the Yola language could be heard in Wexford, and a few words still remain in use.

The food of Wexford is also distinct from the rest of Ireland, due to the local cultivation of seafood, smoked cod, mussels and rissoles being token dishes in the region.

Notable churches within the town include the "twin churches" St. Iberius Church, Bride Street and Rowe Street with their distinctive spires; Saint Peter's College, with a chapel designed by Augustus Welby Pugin; and Ann Street Presbyterian church. A former Quaker meeting hall is now a band room in High Street. The twin churches can be seen from any part of Wexford and in 2008 celebrated their 150th anniversary.

Curracloe Beach in Wexford was the location in 1997 for the opening scenes of Saving Private Ryan.

The Wexford Wildfowl Reserve is a Ramsar site based on mudflats, (known locally as slobland), just outside Wexford. It is a migratory stop-off point for thousands of ducks, geese, swans and waders. Up to 12,000 (50% of the world's population) of Greenland white-fronted geese spend the winter on the Wexford slobs. There is a visitor centre with exhibitions and an audio-visual show.

Wexford railway station opened on 17 August 1874. The railway line from Dublin to Rosslare Harbour runs along the quayside on the north-eastern edge of the town. In 2010 the Rosslare Strand-Waterford rail services were suspended, due to budget cuts at Irish Rail.

Wexford is also served by local and national bus networks, primarily Bus Éireann, Wexford Bus and Ardcavan. There are also many local taxi and hackney providers.

Rosslare Europort is 19 kilometers south of Wexford. Car ferries run between Fishguard and Pembroke in Wales and Cherbourg and Roscoff in France. The ferry companies operating on these routes are Stena Line and Irish Ferries. Foot passengers can use the SailRail tickets from Wexford railway station via Rosslare Europort and Fishguard Harbour to reach Swansea, Cardiff Central and onwards including London Paddington.

The closest airport to Wexford is Waterford Airport which is approximately one hour away (70 km). Dublin Airport and Cork Airport are both approximately two-and-a-half hours away.

The town also has a shuttle-bus service which has stops at the town's main facilities.

Main page: List of twin towns and sister cities in the Republic of Ireland

Wexford is twinned with the following places:

All content from Kiddle encyclopedia articles (including the article images and facts) can be freely used under Attribution-ShareAlike license, unless stated otherwise. Cite this article:
Wexford Facts for Kids. Kiddle Encyclopedia.