Kids Encyclopedia Facts
This page is about the oldest city in Ireland. For other uses, see Waterford (disambiguation).

Waterford (from Old Norse Veðrafjǫrðr, meaning "ram (wether) fjord", Irish: Port Láirge) is a city in Ireland. It is in the South-East Region, Ireland and is part of the province of Munster. The city is situated at the head of Waterford Harbour. It is the oldest and the fifth most populous city in the Republic of Ireland. It is the eighth most populous city on the island of Ireland. Waterford City and County Council is the local government authority for the city. Waterford is known for Waterford Crystal, a legacy of the city's former glass-making industry. . According to the 2011 Census, 65,928 people live in the Waterford Metropolitan District, however this figure does not include its suburbs in County Kilkenny and County Wexford. There are over 80,000 people within a 15 km radius of the city centre.

With a population of 51,519, Waterford is the fifth most populous city in the State and the 32nd most populous area of local government.

Following the Local Government Reform Act 2014, Waterford City and County Council is the local government authority for the city. The authority came into operation on 1 June 2014. Prior to this the city had its own local council, Waterford City Council. The new Council is the result of a merger of Waterford City Council and Waterford County Council. The Council has 32 representatives (councillors) who are elected from five electoral areas. The city itself forms three of the electoral areas – which when combined form the Metropolitan District of Waterford – and returns a total of 18 councillors to Waterford City and County Council. Residents in these areas are restricted to voting for candidates located in their ward for local elections. The office of the Mayor of Waterford was established in 1377. A mayor is then elected by the councillors from the two electoral areas of the Metropolitan District of Waterford every year, and there is no limit to the number of terms an individual may serve. Mary O'Halloran who was mayor during 2007–2008 was the first woman to hold the post. The current mayor is Adam Wyse.

For the purposes of elections to Dáil Éireann, the city is part of the Waterford constituency, which includes the county of Waterford except for those parts of the county near Clonmel that lie in Tipperary South. The constituency elects four deputies to Dáil Éireann. There are no such ward restrictions for these elections and voters are entitled to vote for any candidate throughout the city and county.

Viking raiders first established a settlement near Waterford in 853. It and all the other longphorts were vacated in 902, the Vikings having been driven out by the native Irish. The Vikings re-established themselves in Ireland at Waterford in 914, led at first by Ottir Iarla (Jarl Ottar) until 917, and after that by Ragnall ua Ímair and the Uí Ímair dynasty, and built what would be Ireland's first city. Among the most prominent rulers of Waterford was Ivar of Waterford.

In 1167, Diarmait Mac Murchada, the deposed King of Leinster, failed in an attempt to take Waterford. He returned in 1170 with Cambro-Norman mercenaries under Richard de Clare, 2nd Earl of Pembroke (known as Strongbow); together they besieged and took the city after a desperate defence. In furtherance of the Norman invasion of Ireland, King Henry II of England landed at Waterford in 1171. Waterford and then Dublin were declared royal cities, with Dublin also declared capital of Ireland. 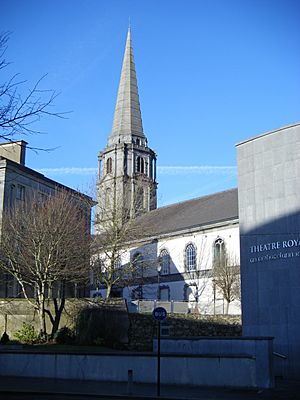 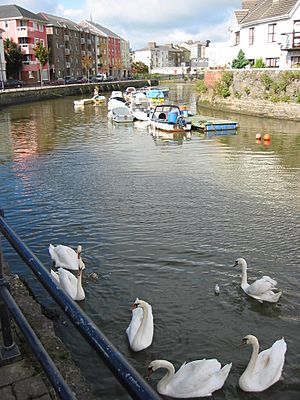 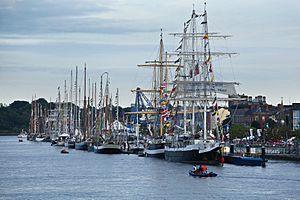 Tall Ships lined up on the quays in Waterford for the festival. 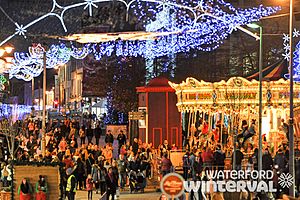 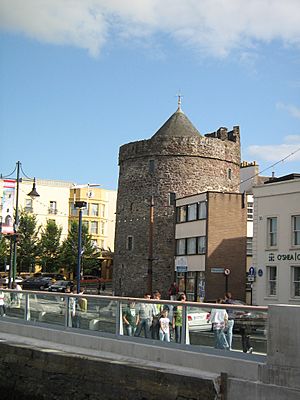 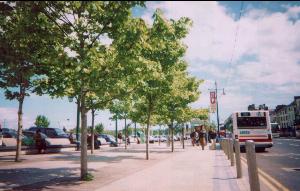 The Quays: "The Three Sisters" mix near the city before flowing into the harbour. 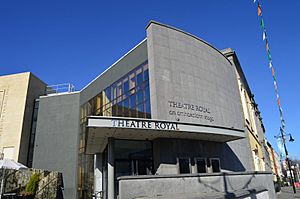 The city of Waterford consists of various cultural quarters, the oldest of which is known as Viking Triangle. This is the part of the city surrounded by the original 10th century fortifications, which is triangular in shape with its apex at Reginald's Tower. Though this was once the site of a thriving Viking city, the city centre has shifted to the west over the years, and it is now a quiet and tranquil area, dominated by narrow streets, medieval architecture, and civic spaces. Over the past decade, a number of restaurants have opened in High Street and Henrietta Street, taking advantage of the charming character of the area. Much of Waterford's impressive architecture is to be found in the 'Viking Triangle'.

In the 15th century, the city was enlarged with the building of an outer wall on the west side. Today Waterford retains more of its city walls than any other city in Ireland with the exception of Derry, whose walls were built much later. Tours of Waterford's city walls are conducted daily. 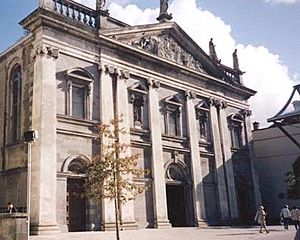 Cathedral of the Most Holy Trinity on Barronstrand Street.

The Quay, once termed by historian Mark Girouard 'the noblest quay in Europe', is a mile long from Grattan Quay to Adelphi Quay, though Adelphi Quay is now a residential area. It is still a major focal point for Waterford, commercially and socially, and the face that Waterford presents to those travelling into the city from the north. Near Reginald's Tower is the William Vincent Wallace Plaza, a monument and amenity built around the time of the millennium that commemorates the Waterford born composer.

John Roberts Square is a pedestrianised area that is one of the main focal points of Waterford's modern day commercial centre. It was named after the city's most celebrated architect, John Roberts, and was formed from the junction of Barronstrand Street, Broad Street and George's Street. It is often referred to locally as Red Square, due to the red paving that was used when the area was first pedestrianised. A short distance to the east of John Roberts Square is Arundel Square, another square with a fine commercial tradition, which the City Square shopping centre opens onto. 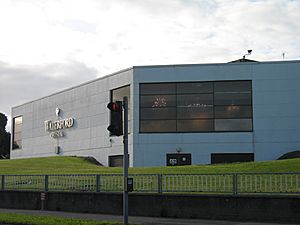 The old Waterford Crystal visitor centre which closed in late 2009. A new centre opened in June 2010.

Ballybricken, in the west, just outside the city walls, is thought to have been Waterford's Irishtown, a type of settlement that often formed outside Irish cities to house the Vikings and Irish that had been expelled during the Norman invasion of Ireland. Ballybricken is an inner city neighbourhood with a long tradition, centred around Ballybricken hill, which was a large, open market-square. Today it has been converted into a green, civic space, but the Bull Post, where livestock was once bought and sold, still stands as a remnant of the hill's past.

The Mall is a fine Georgian thoroughfare, built by the Wide Streets Commission to extend the city southwards. It contains some of the city's finest Georgian architecture. The People's Park, Waterford's largest and finest park, is located nearby.

Ferrybank, in County Waterford, is Waterford's only suburb north of the river. It contains a village centre of its own.

In April 2003 an important site combining a 5th-century Iron Age and 9th century Viking settlement was discovered at Woodstown near the city, which appears to have been a Viking town that predates all such settlements in Ireland.

Waterford's oldest public house (pub) can be found just outside the old 'Viking Triangle'. T & H Doolan's, of 31/32 George's Street, has been officially active and open to the public for over three hundred years. The official record of licences dates back to the 18th century but the premises is believed to be closer to five hundred years in age. A main element of the structure includes one of the original city walls, almost 1,000 years old, which can be viewed in the lounge area of the building.

Bus services operate throughout the city centre and across the region.

The Waterford Greenway is Ireland's longest greenway, and connects the city with Mount Congreve, Kilmeaden, Kilmacthomas, and Dungarvan.

Waterford Airport is located 9 km outside the city centre.

Car rental services in Waterford are offered by Europcar, Hertz, and Enterprise.

All content from Kiddle encyclopedia articles (including the article images and facts) can be freely used under Attribution-ShareAlike license, unless stated otherwise. Cite this article:
Waterford Facts for Kids. Kiddle Encyclopedia.