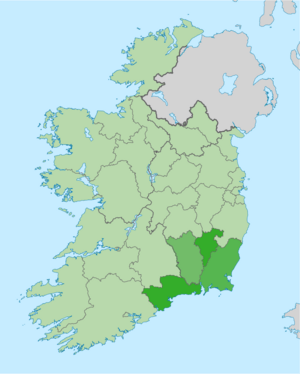 The South-East region of Ireland with each constituent county highlighted.

The Ireland South East Region (coded IE052) is a NUTS Level III statistical region of Ireland. The region comprises the counties of Waterford, Carlow, Kilkenny, and Wexford. Waterford City is the regional capital. The South-East region spans 7,198 km2, 10.2% of the total area of the state and according to the 2016 census had a population of 422,062.

The Regional Authorities were dissolved in 2014 and were replaced by Regional Assemblies. North Tipperary County Council and South Tipperary County Council were unified into a single local authority for the county on the 1st June, 2014. The current NUTS classification was released in 2013, and remains in place until the end of 2016, therefore Tipperary remains divided for statistical purposes into two different NUTS 3 regions until the next amendment to the classification is released in 2017, which will take into account the changes to the Local Administrative Units of each member state.

According to the 2016 census, the region had a population of 422,062 which constitutes 8.86% of the national population. Its population density was 58.6 persons per km2. The population of the regional capital, Waterford, was 53,504.

The main urban centres within the region each exceed 17,000 in terms of population with an evenly distributed network of second and third-tier towns. This is also supplemented by a strong rural settlement initiative.

A list of the ten largest settlements in the South-East region. County capitals are included and are shown in bold.

The Ireland South East region has grown steadily over the past decade and has strong economic clusters in Engineering, Life Sciences, Financial Services, ICT, Agri-Food and the Creative sectors. Eurostat data shows the region as being the 6th fastest growing region in the EU in terms of job creation (2012–2017) and the 7th fastest growing region in terms of Gross Value Added (GVA) per person.

Ireland South East represents a place of opportunity for business, careers, investment, and tourism. A qualitative analysis of the company and infrastructural activity in the region also shows continuing positivity, with new job announcements, new investments, and major infrastructural projects underway. The region continues to score well on affordability and quality of life metrics making it an attractive place for talent and investment.

Tourism in the region is aided by its rich natural, historic and archaeological sites, which attract over 1 million people annually.

All content from Kiddle encyclopedia articles (including the article images and facts) can be freely used under Attribution-ShareAlike license, unless stated otherwise. Cite this article:
South-East Region, Ireland Facts for Kids. Kiddle Encyclopedia.