Carlow ( Irish: Ceatharlach) is the county town of County Carlow in Ireland. It is situated in the south-east of Ireland, 84 km from Dublin. County Carlow is the second smallest county in Ireland by area - occupying 841 km2. According to the 2016 census there is a population of 56,875 people living in County Carlow. The River Barrow flows through the town, and forms the historic boundary between counties Laois and Carlow: the Local Government (Ireland) Act 1898 included the town entirely in County Carlow. The settlement of Carlow is thousands of years old and pre-dates written Irish history. The town has played a major role in Irish history, serving as the capital of the country in the 14th century. It was voted the cleanest town in Ireland by Irish Business Against Litter (IBAL) in 2010.

The name Carlow is an anglicisation of the Irish language name Ceatharlach. Historically, it was anglicised as Caherlagh, Caterlagh and Catherlagh, which are closer to the Irish spelling. According to logainm.ie, the first part of the name derives from the Old Irish word cethrae ("animals, cattle, herds, flocks"), which is related to ceathar ("four") and therefore signified "four-legged". The second part of the name is the ending -lach.

Some, such as Deirdre Flanagan, believe that the name should be Ceatharloch (meaning "quadruple lake"), since ceathar means "four" and loch means "lake". It is directly translated as "Four lakes", although, there is seemingly no evidence to suggest that these lakes ever existed in this area.

The Carlow county area has been settled for thousands of years, evidence of human occupation extends back thousands of years, the most notable and dramatic prehistoric site being the Browneshill Dolmen – a megalithic portal tomb just outside Carlow town.

Now part of the diocese of Kildare and Leighlin, several Early Christian settlements are still in evidence today around the county. St Mullin's monastery is believed to have been established around the 7th century, the ruins of which are still in evidence today. Old Leighlin was the site of one of the largest monastic settlements in Ireland and the location for a church synod in 630 AD which determined the date of Easter. St Comhgall built a monastery in the Carlow area in the 6th century, an old church building and burial ground survive today at Castle Hill known as Mary's Abbey. Carlow was an Irish stronghold for agriculture in the early 1800s which earned the county the nickname of the scallion eaters. Famine wiped out a lot of the population, cutting it in half.

Carlow Castle was constructed by William Marshal, Earl of Striguil and Lord of Leinster, c1207-13, to guard the vital river crossing. It was also to serve as the capital of the Lordship of Ireland from 1361 until 1374. This imposing structure survived largely intact until 1814 when it was mostly destroyed in an attempt to turn the building into a lunatic asylum. The present remains now are the West Wall with two of its cylindrical towers. The bridge over the river Barrow – Graiguecullen Bridge, is agreed to date to 1569. The original structure was largely replaced and widened in 1815 when it was named Wellington Bridge in celebration of the defeat of Napoleon's army by the Duke of Wellington at the Battle of Waterloo in June of that year. The bridge was built across a small island in the river and a 19th-century house was constructed on the bridge – this was for a time occupied by the Poor Clares, an enclosed religious order who still have a convent in Graiguecullen. Another convent belonging to the Presentation Order of nuns now houses the County Library and beautifully restored, newly opened Carlow County Museum. The Cathedral, designed by Thomas Cobden, was the first Catholic cathedral to be built in Ireland after Catholic Emancipation in 1829. Its construction cost £9,000 and was completed in 1833. Beside the cathedral, Saint Patrick's College dates from 1793. The College, was established in 1782 to teach the humanities to both lay students and those studying for the priesthood. The Carlow Courthouse was constructed in the 19th century. There are still many old estates and houses in the surrounding areas, among them Ducketts Grove and Dunleckney Manor. St Mullin's today houses a heritage centre. 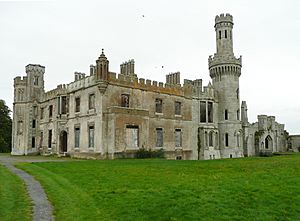 In 1703 the Irish House of Commons appointed a committee to bring in a bill to make the Barrow navigable, by 1800 the Barrow Track was completed between St. Mullin's and Athy, establishing a link to the Grand Canal which runs between Dublin and the Shannon. By 1845 88,000 tons of goods were being transported on the Barrow Navigation. Carlow was also one of the earliest towns to be connected by train, the Great Southern and Western Railway had opened its mainline as far as Carlow in 1846, this was extended further to reach Cork in 1849. The chief engineer, William Dargan, originally hailed from Killeshin, just outside Carlow. At the peak of railway transport Ireland, Carlow county was also served by a railway line to Tullow. Public supply of electricity in Carlow was first provided from Milford Mills, approximately 8 km south of Carlow, in 1891. Milford Mills still generates electricity feeding into the national grid. Following independence in the early 1920s the new government of the Irish Free State decided to establish a sugar-processing plant in Leinster, Carlow was settled on as the location due to its transport links and large agricultural hinterland, favourable for growing sugar beet.

The town is recalled in the famous Irish folk song, Follow Me Up to Carlow, written in the 19th century about the Battle of Glenmalure, part of the Desmond Rebellions of the late 16th century. In 1650, during the Cromwellian conquest of Ireland, Carlow was besieged and taken by English Parliamentarian forces, hastening the end of the Siege of Waterford and the capitulation of that city. During the 1798 rebellion Carlow was the scene of a massacre of 600 rebels and civilians following an unsuccessful attack on the town by the United Irishmen, known as the Battle of Carlow. The Liberty Tree sculpture in Carlow, designed by John Behan, commemorates the events of 1798. The rebels slain in Carlow town are buried in the 'Croppies Grave', in '98 Street, Graiguecullen.

One of Carlow's most notable landmarks is the Brownshill Dolmen, situated on the Hacketstown Road (R726). The capstone of this impressive Dolmen is reputed to be the largest in Europe. 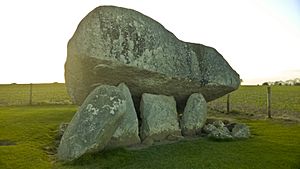 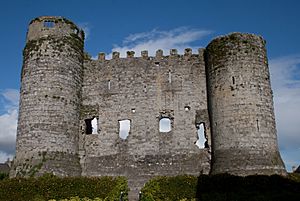 West side of Carlow Castle

Carlow Castle was probably built between 1207 and 1213 by William Marshall on the site of a motte erected by Hugh de Lacy in the 1180s. Only the western wall and two towers now survive. It is located on the banks of the River Barrow near Carlow town centre. The castle is now the imposing centrepiece of a major urban renewal programme.

Ducketts Grove is the ruin's of the Georgian home of the Duckett Family, built circa 1800s. It was taken over by Carlow County Council in 2005, who restored the walled gardens for use by the public as a park. It is situated just off the R418.

Carlow Courthouse is situated at the end of Dublin Street. It was designed by William Vitruvius Morrison in 1830 and completed in 1834. It is built of Carlow granite and gives the impression of being a temple set on a high plinth. The basement contains cells and dungeons. A cannon from the Crimean War stands on the steps. 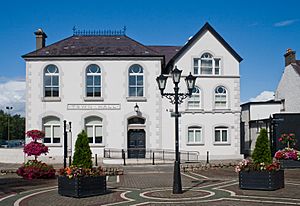 Carlow Town Hall is situated on the north side of the Haymarket, and was the trading centre for Carlow. A number of other markets were located around the town, including the Potato Market and Butter Market. The Town Hall was designed by the church architect William Hague in 1884.

Milford is a green area on the River Barrow approx 5 miles outside of Carlow town. It is notable as its home to Milford Mill, which was the first inland hydro-electrical plant in Ireland. It began supplying Carlow town with power in 1891.

The N9 road from Dublin to Waterford passed directly through the town until May 2008 when a bypass, part of the M9 motorway, was opened, greatly reducing traffic through the town. The N80 National secondary road skirts the edge of the town. The town is also connected to the national rail network. These transport links have helped Carlow to become a successful satellite town of Dublin in recent years. The establishment of the Institute of Technology, Carlow, has also helped drive growth in the area and encouraged many school leavers to remain in the town. Carlow railway station opened on 4 August 1846 and was closed for goods traffic on 9 June 1976, it remains open for public travel. 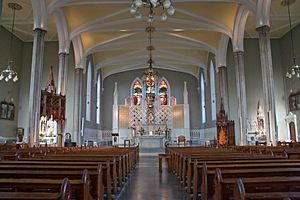 Carlow is twinned with the following places:

All content from Kiddle encyclopedia articles (including the article images and facts) can be freely used under Attribution-ShareAlike license, unless stated otherwise. Cite this article:
Carlow Facts for Kids. Kiddle Encyclopedia.