Kids Encyclopedia Facts
This page is about the Irish town. For other uses, see New Ross (disambiguation).

New Ross (Irish: Ros Mhic Thriúin, formerly Ros Mhic Treoin) is a town in southwest County Wexford, Ireland. It is located on the River Barrow, near the border with County Kilkenny, and is around 20 km north east of Waterford. In 2011 it had a population of over 9,316 people, making it the third-largest town in the county after Wexford and Enniscorthy. 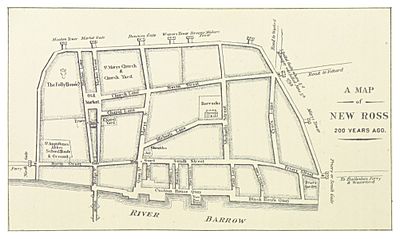 The port town of New Ross dates from pre-Middle Ages. The earliest settlement in this area dates back to the 6th century when St. Abban of Magheranoidhe founded a monastery in what is now Irishtown. The original earthen banked circular enclosure of his monastery was visible around the graveyard until about 10 years ago when it was ceremoniously removed by the council. It has been replaced by a concrete wall and steel fence. Its name, Ros, was shortened from Ros Mhic Treoin, or the Wood of the Son of Astley.

New Ross was in the territory of Dermot McMurrough and came to prominence when the Anglo-Normans conquered the region. The Norman knight William Marshall and his bride Isabella de Clare arrived during the early part of the 13th century. An earthen defensive structure called a motte was quickly built at Old Ross in order to hold the newly conquered territory. A medieval borough sprung up around it - peopled by English and Welsh settlers. The arrival of Isabella and William is described in the Chronicles of Ross, which are in the British Museum. It records that in 1189, Isabella set about "building a lovely city on the banks of the Barrow". The town's fortunes further increased when King John made William the Earl of Pembroke at his condemnation in 1199. A year later, the Earl Marshal transferred the Norman capital of Leinster to Kilkenny and New Ross became the main port.

The town grew around the bridge built by William Marshal, son-in-law of Richard de Clare, 2nd Earl of Pembroke (Strongbow), and a leader of the Norman invasion of Ireland. The town of New Ross (the town of the new bridge) was granted a Royal Charter in 1207. The port gained concessions from King John in 1215 and again in 1227 but these were later revoked by Henry III and Edward I to protect the port of Waterford. New Ross was still Ireland's busiest port in the 13th century. These restrictions were lifted in the 14th century by Edward II and Edward III.

St Mary's Abbey (Church of Ireland) was built in 1811. There are two Roman Catholic churches, the parish church of SS. Michael and Mary completed in 1902, and the Augustinian church opened in 1835. 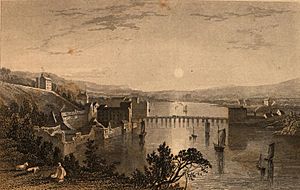 The town was fought over in the Irish Confederate Wars of the 1640s. In 1643, the town resisted the siege by James Butler, 1st Duke of Ormonde, who fought a battle near the town with an Irish army under Thomas Preston, 1st Viscount Tara but later re-conquered by Oliver Cromwell in 1649 who discharged three cannon shots at the Aldgate. The town is a geographically important crossing point, sited where it is on the River Barrow between the river estuary to the south and the point where the River Nore joins the Barrow to the north. It was the location of one of the bloodiest battles of the 1798 rebellion. 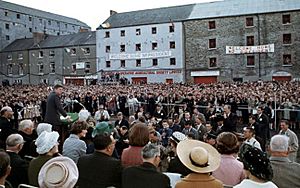 The town's arts centre is St Michael's Theatre. The present building was built in 1806, eight years after the Insurrection of 1798 and served as the Parish church until 1902 when the new parish church, St. Mary's & Michael's, was opened. St Michael's boasts a 300-seat theatre, a 50-seat studio venue, an art gallery, a cinema, a coffee shop and a bar. Now a fully fledged arts centre, St Michael's has a staff of 12. 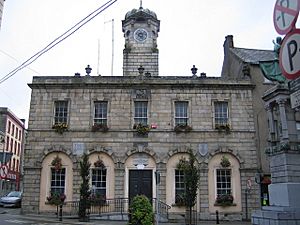 New Ross is home to the Ros Tapestry project, a major community initiative being undertaken throughout County Wexford by a team of voluntary embroiderers. The fifteen tapestry panels are expected to be completed by 2010. The tapestries depict events around the arrival of the Anglo-Normans in south east Ireland, and specifically the founding of New Ross by William Marshall.

The road crossing the Barrow is the important N25 road linking Cork, Waterford City 25 km (16 mi) away and Rosslare Harbour 40 km (25 mi) away. The N30 links Enniscorthy and New Ross.

The town is served by several bus routes and its main stop is on The Quay (both sides of road). There are numerous services to and from Waterford each day. Bus Éireann is the principal operator providing Expressway services to Dublin and Dublin Airport (route 4) and to Rosslare Europort and Cork (route 40) as well as local services to Campile, Wellingtonbridge and other locations in South County Wexford. Wexford Bus operate a service between Wexford and Waterford while Kilbride Coaches operate a route linking the town to Kilkenny. Wexford Local Link operate services to Enniscorthy.

Many of the town's inhabitants work in surrounding towns such as Waterford, Wexford and Kilkenny. Re-opening the railway would allow a light commuter rail option to these areas and solve the local traffic problems. New Ross railway station opened on 19 September 1887, closed for passenger traffic on 30 March 1964 and closed for goods traffic on 6 September 1976.

New Ross is Ireland's only inland port, some 32 km (20 mi) from the sea on the River Barrow. A small marina has recently been built just downstream of the town. The tall ship Asgard II which provided sail-training, often docked in New Ross on its travels and many locals have sailed on the ship from their home port.

Until the creation of ships too large to reach the port, in the 19th century, New Ross was a prosperous port town. However, the river is too shallow to allow passage of large ships and the port gradually went into decline. The town continued to be a prosperous market town for the rich agricultural hinterland, but suffered from severe recession throughout the 1970s, 1980s, and early part of the 1990s. Now there is a small amount of industry in the area and most businesses centre on services and retail although the local retail trade is under pressure from a number of larger retail outlets like Tesco, Lidl and Aldi which attract business away from the centre of town to the outskirts. However the town is so small that many of these shops are within walking distance of one another.

Latterly it has benefited from professionals making their homes in the town who work in Waterford, about 25 km (16 mi) away. There is also a strong international community, mainly eastern European, in New Ross, associated with the transport and manufacturing industries. There are two Polish shops and one Lithuanian. A degree of tourism associated with The Dunbrody replica famine ship and the connection with the Kennedy family also benefits the town.

Ros Tapestry Exhibition Centre located on the Quay in New Ross, is a series of 15 embroidered Tapestry panels. Depicting Celtic Ireland looking at Celtic rituals, Woman Warriors and Brehon Law, to early Christian Ireland illustrating the collision of the pagan and Christian worlds, the Vikings of Wexford and the ousting of Diarmait MacMurchada from his Kingdom of Leinster and sailing to France in search of King Henry II.

Also depicted the Greatest Knight that ever lived William Marshal who married Isabel de Clare heiress of Strongbow, Earl of Pembroke and granddaughter of Diarmait MacMurchada. Together William and Isabel transformed the wilderness on the banks of the deep river Barrow creating the town of New Ross, which became one of busiest and wealthiest ports in Ireland, with over 400 ships berthed at any one time. Discover the Castles, Fortresses and lighthouse built by them, all beautifully painted in thread. 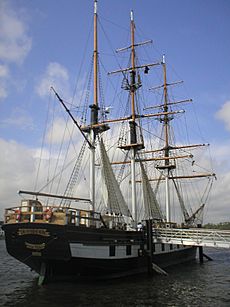 New Ross is home to the Dunbrody replica famine ship which is moored on the Quay, and allows visitors to experience the sights and smells of life aboard the emigrant ship It includes the bell from the original famine ship, donated by the Graves family.

The town also houses the Emigrant Flame; a constantly burning flame in memorandum of the emigrants of the famine.

A statue of John F. Kennedy is located on the quayside. The statue was unveiled in July 2008 by his sister Jean Kennedy Smith.

The JFK Dunbrody Festival is held each year in July in the town and centres primarily on live music on the festival stage.

In the picturesque village of Duncannon, 21 km (13 mi) to the south of New Ross the historic Duncannon Fort is located alongside the lovely Blue Flag beach.

The Hook Lighthouse is located 39 km (24 mi) south of New Ross and is thought to be one of the oldest operational lighthouses in the world.

The Kennedy family Homestead, the ancestral home of US President John F Kennedy is located 8 km (5.0 mi) south of New Ross, and the JFK Arboretum which is dedicated to the memory of the late president is also located to the south of the town.

New Ross has town twinning agreements with the communities of:

All content from Kiddle encyclopedia articles (including the article images and facts) can be freely used under Attribution-ShareAlike license, unless stated otherwise. Cite this article:
New Ross Facts for Kids. Kiddle Encyclopedia.