James Butler, 1st Duke of Ormonde PC (19 October 1610 – 21 July 1688) was an Anglo-Irish (from English and Irish family) politician and soldier. From 1641 to 1647, he was the leader in the fight against the Irish Catholic Confederation. From 1649 to 1650 he was top commander of the Royalist forces fighting against Oliver Cromwell who wanted to invade Ireland. In the 1650s he lived in exile in Europe with Charles II of England. When Charles II was put back on the British throne during the restoration in 1660, Ormonde became very important in English and Irish politics.

The Butlers of Ormonde were an Old English dynasty. They had been very important people the southeast of Ireland since the Middle Ages. His father was Thomas Butler, Viscount Thurles. Thurles is a place in County Tipperary. James was the oldest son.

His father died in 1619, when he was 9 years old. He became Viscount Thurles. His mother took him to England where his grandfather (Walter Butler, 11th Earl of Ormond) made him go to a Catholic school. James I was King at the time. James I was a Protestant, and wanted to make sure that James would also be a Protestant. This would give him power in Ireland once James Butler went back to Thurles. James I placed James Butler under the care of archbishop George Abbot. When he was fifteen he went to live with his grandfather at Drury-lane."

In December 1629, he married Lady Elizabeth Preston. In 1634, on the death of his grandfather, he became Earl of Ormonde.

In 1633 Thomas Wentworth, 1st Earl of Strafford became head of government in Ireland. He liked Ormonde. He wrote to Charles I saying that Ormonde was "young, but take it from me, a very staid head". Ormonde became Wentworth's friend and supporter.

Wentworth planned to take land from the Catholics in Ireland. He did this to get money for the British king. He also wanted to break the political power of the Irish Catholic gentry. Ormonde supported this plan.

The plans made his relatives very angry, and many of them opposed Wentworth. This led to armed rebellion. The opposition to Wentworth helped an impeachment of the Earl by the English Parliament. He was executed in May, 1641.

When the Irish Rebellion of 1641 started, Ormonde was in command of government troops based in Dublin. Most of the country was taken by the Catholic rebels, who included Ormonde's Butler relatives. Rebel leader Richard Butler, 3rd Viscount Mountgarret, was Ormonde's cousin. In spring 1642 Mountgarret and Ormonde were the commanders of the two sides at the battle of Kilrush, with Ormonde's side winning.

In spring 1642 the Irish Catholics formed their own government, the Catholic Confederation. The capital was Kilkenny. They started to organise their own troops. Also in early 1642 the king sent in troops from England and Scotland to help with the fight. The Irish Confederate War had started.

Ormonde cleared the area around Dublin of Confederate forces. He got control of the area historically known as the Pale. In March 1643 Ormonde brought his troops to New Ross. This was deep in the territory of the Catholic Confederation. He won a small victory there (Battle of New Ross) before returning to Dublin.

However, Ormonde was in a very difficult situation. The Confederates held two thirds of the island. The English Civil War had started in September 1642. This meant that there were not going to be more troops from England to help him. The King had even asked to send back the troops he had sent before.

Isolated in Dublin, Ormonde agreed to a ceasefire (to stop fighting) with the Catholics, which began in September 1643. The greater part of Ireland was given up into the hands of the Catholic Confederation. This left only districts in the north, the Dublin Pale, round Cork City, and certain smallish garrisons in the possession of Protestant commanders. This truce was strongly opposed by the Lords Justices and the Protestant community in general in Ireland.

In November 1643 the king appointed Ormonde as Lord Lieutenant of Ireland. This was the highest post in the Irish government. Ormonde was told to stop the king's Parliamentarian enemies being helped from Ireland. He also had to deliver more troops to fight for the Royalist side in England. He was also given the king's authority to make peace with the Catholic Confederation. They could then allow their troops to fight against the Parliamentarians.

Negotiations with the Irish Confederates 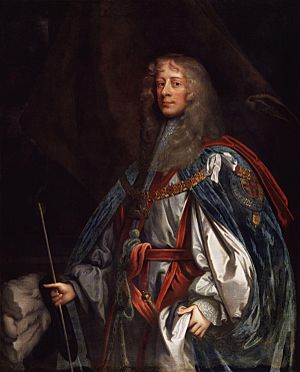 Ormonde had a difficult job to do.

The Old native Irish and Catholic Irish of English descent ("the Old English") had their own government in Confederate Ireland. They would support King Charles I of England if he would allow them freedom to be Catholics, and give them self-government. On the other side, any deals he made with Catholic Confederates meant that his support among English and Scottish Protestants in Ireland would become less.

On August 25, 1645, Edward Somerset, 2nd Marquess of Worcester, acting on behalf of King Charles, signed a treaty (peace agreement) in Kilkenny with the Irish Catholic Confederates. He did not talk about this with the Irish Protestant community. Irish Protestants were strongly against this, and Charles was forced to undo the treaty almost immediately. He was afraid that almost all Irish Protestant would give support to the other side in the English Civil War.

On March 28, 1646, Ormonde, on behalf of the king, signed another treaty with the Confederates. This one gave them religious and other rights. However, the Confederates' General Assembly (their government) in Kilkenny did not like the deal. This was in part because of what the pope's ambassador (nuncio) Giovanni Battista Rinuccini said. He did not want the Catholics to compromise. The Confederates arrested those among them who had signed the treaty with Ormonde.

Ormonde then judged that he could not keep the Confederates out of Dublin. He asked for help from English Long Parliament and signed an agreement with them on June 19, 1647. At the beginning of August Ormonde handed over Dublin, together with 3000 royalist troops under his command, to the Parliamentarian commander Michael Jones. He had arrived from England with 5000 Parliamentarian troops. Ormonde in turn sailed to England. He said about his surrender that he "preferred English rebels to Irish ones."

The royalist and parliamentarian troops were fighting on different sides in the English Civil War. But in Ireland, they fought together against the Catholic Confederates. The combined troops won a major battle against the Confederates soon afterward near Dublin (Battle of Dungan's Hill).

In March 1648 he joined the queen and the Prince of Wales in Paris. In September he went back to Ireland. He was going to try to get the Irish Confederates and the Irish Protestants to support the king now that the pope's nuncio was gone.

The Irish Confederates wanted to make a compromise now. Their battle against the English Parliamentarian forces was not going well. On 17 January 1649 Ormonde signed a peace with the rebels which said that they could practice their religion freely.

After Charles I was executed in 1649, he stated Ireland's support for Charles II. Ormonde was put in command of the Irish Confederates' armies and also the English Royalist troops who had come to Ireland. Almost all of Ireland was under his control before August 1649. Yet Ormonde was not able to stop the conquest of Ireland by Oliver Cromwell in 1649-50.

Most of the English and Protestant Royalist troops left Ormonde's side and went to fight for Cromwell in May 1650. The Irish Catholic troops were the only ones left under his command. They did not trust him. Ormonde was made to leave his command in late 1650. He returned to France later that year. In Cromwell's Act of Settlement 1652, all of Ormonde's lands in Ireland were taken from him.

Ormonde was great friends with Charles II and the queen mother in Paris. He went to Aix and Cologne with Charles when he had to leave France. He played an active part in the secret planning of the Restoration (the plan to put Charles II back on the throne of England.). 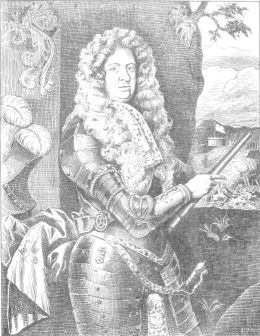 The Duke of Ormonde

After Charles II became king, Ormonde got a lot of different responsibilities and titles from the king. He was made

In March 1669, Ormonde was removed from the government of Ireland. He did not mind. He made sure that his sons and others that listened to him stayed in their posts. He was chosen as Chancellor of the University of Oxford on 4 August 1669.

In 1670 an attempt was made to kill the duke by an adventurer named Thomas Blood. Ormonde was attacked by Blood and his helpers while driving up St James's Street on the night of 6 December 1670. He was pulled out of his carriage, and taken on horseback along Piccadilly. They wanted to hang him at Tyburn. Ormonde managed to escape.

In 1677 the king decided that he would become the Lord Lieutenant of Ireland once again.

On his arrival in Ireland he set up a tax system, and reorganised the army. After the Popish Plot (1678) in England, Ormonde at once took action that would make Roman Catholics powerless. There were far more Catholics than Protestants in the country (15 Catholics for every 1 Protestant). In 1682 he went back to London at the request of the King, who he supported. The last thing he did as lord lieutenant was to declare Irish support for James II of England after the death of Charles II.

Ormonde lived in retirement at Cornbury in Oxfordshire. Ormonde died on 21 July 1688 at Kingston Lacy, Dorset. Ormonde was buried in Westminster Abbey on 1 August 1688.

All content from Kiddle encyclopedia articles (including the article images and facts) can be freely used under Attribution-ShareAlike license, unless stated otherwise. Cite this article:
James Butler, 1st Duke of Ormonde Facts for Kids. Kiddle Encyclopedia.