Tyburn was a village in the county of Middlesex close to the current location of Marble Arch and the southern end of Edgware Road in present-day London. It took its name from the Tyburn Brook, a tributary of the River Westbourne. The name Tyburn, from Teo Bourne meaning 'boundary stream', is quite widely occurring, and the Tyburn Brook should not be confused with the better known River Tyburn, which is the next tributary of the River Thames to the east of the Westbourne.

For many centuries, the name Tyburn was synonymous with capital punishment, it having been the principal place for execution of London criminals and convicted traitors, including many religious martyrs. It was also known as 'God's Tribunal', in the 18th century.

The village was one of two manors of the parish of Marylebone, which was itself named after the stream, St Marylebone being a contraction of St Mary's church by the bourne. Tyburn was recorded in the Domesday Book and stood approximately at the west end of what is now Oxford Street at the junction of two Roman roads. The predecessors of Oxford Street (called Tyburn Road in the mid 1700s) and Edgware Road were roads leading to the village, later joined by Park Lane (originally Tyburn Lane).

In the 1230s and 1240s the village of Tyburn was held by Gilbert de Sandford, the son of John de Sandford who had been the Chamberlain of Queen Eleanor. Eleanor had been the wife of King Henry II who encouraged her sons Henry and Richard to rebel against her husband, King Henry. In 1236 the city of London contracted with Sir Gilbert to draw water from Tyburn Springs, which he held, to serve as the source of the first piped water supply for the city. The water was supplied in lead pipes that ran from where Bond Street Station stands today, one-half mile (0.80 kilometres) east of Hyde Park, down to the hamlet of Charing (Charing Cross), along Fleet Street and over the Fleet Bridge, climbing Ludgate Hill (by gravitational pressure) to a public conduit at Cheapside. Water was supplied free to all comers.

Tyburn had significance from ancient times and was marked by a monument known as Oswulf's Stone, which gave its name to the Ossulstone Hundred of Middlesex. The stone was covered over in 1851 when Marble Arch was moved to the area, but it was shortly afterwards unearthed and propped up against the Arch. It has not been seen since 1869.

Public executions took place at Tyburn, with the prisoners processed from Newgate Prison in the City, via St Giles in the Fields and Oxford Street. After the late 18th century, when executions were no longer carried out in public, they were carried out at Newgate Prison itself and at Horsemonger Lane Gaol in Southwark.

The first recorded execution took place at a site next to the stream in 1196. William Fitz Osbert, the populist leader of the poor of London, was cornered in the church of St Mary le Bow. He was dragged naked behind a horse to Tyburn, where he was hanged. In 1537, Henry VIII used Tyburn to execute the ringleaders of the Pilgrimage of Grace, including Sir Nicholas Tempest, one of the northern leaders of the Pilgrimage and the King's own Bowbearer of the Forest of Bowland.

In 1571, the Tyburn Tree was erected near the modern Marble Arch. The "Tree" or "Triple Tree" was a novel form of gallows, consisting of a horizontal wooden triangle supported by three legs (an arrangement known as a "three-legged mare" or "three-legged stool"). Several felons could thus be hanged at once, and so the gallows were used for mass executions, such as on 23 June 1649 when 24 prisoners – 23 men and one woman – were hanged simultaneously, having been conveyed there in eight carts.

The Tree stood in the middle of the roadway, providing a major landmark in west London and presenting a very obvious symbol of the law to travellers. After executions, the bodies would be buried nearby or in later times removed for dissection by anatomists. The crowd would sometimes fight over a body with surgeons, by fear that dismemberment could prevent the resurrection of the body on Judgement Day (see Jack Sheppard, Dick Turpin or William Spiggot).

The first victim of the "Tyburn Tree" was Dr John Story, a Roman Catholic who was convicted and tried for treason. A plaque to the Catholic martyrs executed at Tyburn in the period 1535 - 1681 is located at 8 Hyde Park Place, the site of Tyburn convent. Among the more notable individuals suspended from the "Tree" in the following centuries were John Bradshaw, Henry Ireton and Oliver Cromwell, who were already dead but were disinterred and hanged at Tyburn in January 1661 on the orders of the Cavalier Parliament in an act of posthumous revenge for their part in the beheading of King Charles I.

The gallows seem to have been replaced several times, probably because of reasons of wear, but in general the entire structure stood all the time in Tyburn. After some acts of vandalism, in October 1759 it was decided to replace the permanent structure with new moving gallows until the last execution in Tyburn, probably carried out in November 1783. 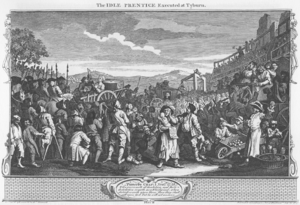 William Hogarth's The Idle 'Prentice Executed at Tyburn, from the Industry and Idleness series (1747)

The executions were public spectacles and proved extremely popular, attracting crowds of thousands. The enterprising villagers of Tyburn erected large spectator stands so that as many as possible could see the hangings (for a fee). On one occasion, the stands collapsed, reportedly killing and injuring hundreds of people. This did not prove a deterrent, however, and the executions continued to be treated as public holidays, with London apprentices being given the day off for them. One such event was depicted by William Hogarth in his satirical print, The Idle 'Prentice Executed at Tyburn (1747).

Tyburn was commonly invoked in euphemisms for capital punishment – for instance, to "take a ride to Tyburn" (or simply "go west") was to go to one's hanging, "Lord of the Manor of Tyburn" was the public hangman, "dancing the Tyburn jig" was the act of being hanged, and so on. Convicts would be transported to the site in an open ox-cart from Newgate Prison. They were expected to put on a good show, wearing their finest clothes and going to their deaths with insouciance. The crowd would cheer a "good dying", but would jeer any displays of weakness on the part of the condemned.

Stone marking the site of the Tyburn tree on the traffic island at the junction of Edgware Road, Marble Arch and Oxford Street

On 19 April 1779, clergyman James Hackman was hanged there following his 7 April murder of courtesan and socialite Martha Ray, the mistress of John Montagu, 4th Earl of Sandwich. The Tyburn gallows were last used on 3 November 1783, when John Austin, a highwayman, was hanged; for the next eighty-five years hangings were staged outside Newgate prison. Then, in 1868, due to public disorder during these public executions, it was decided to execute the convicts inside the prison. The site of the gallows is now marked by three young oak trees that were planted in 2014 on an island in the middle of Edgware Road at its junction with Bayswater Road. Between the trees is a roundel with the inscription "The site of Tyburn Tree". It is also commemorated by the Tyburn Convent, a Catholic convent dedicated to the memory of martyrs executed there and in other locations for the Catholic faith.

Tyburn today remains the point at which Watling Street, the modern A5 begins. According to an 1850 publication, the site was at No. 49. Connaught Square.

The day of the execution

For those people who could not get a pardon (approximately 40% of those sentenced to death), a very probable destiny was to be hanged at Tyburn. However, it is important to clarify that sometimes criminals were also executed and then hung in chains where the crime was committed; instead, those guilty of treason received harder punishments: women were burned at the stake and men were drawn and quartered.

As concerns hangings at Tyburn, at the day of the execution, the voyage of the convicts started from Newgate prison; they were all loaded into a horse-drawn open cart and taken to Tyburn. There, a noose was placed around their neck and the cart pulled away. Death was not immediate; the fight against strangulation could last for three quarters of an hour. It is interesting to note that, even on these occasions, there were instances of pickpocketing in the crowd, a mockery of the deterrent effect of capital punishment.

The last days of the condemned were also marked by religious events. The Sunday before every execution, a sermon was preached in Newgate's chapel where also numerous strangers were willing to pay a fee to be present, probably pushed by the curiosity. Then, the night before the execution, around midnight, the sexton of St Sepulchre's church, adjacent to Newgate, recited some verses outside the wall of the condemned. Finally, the following morning, before the voyage towards Tyburn, the convicts heard prayers and those who wanted to, received the sacrament.

The distance between Newgate and Tyburn was approximately three miles (4.8 kilometres), but, due to the streets crowded of curious people and several stops of the cart, sometimes the journey could last up to three hours. A usual stop of the cart was at the Bowl Inn, in St Giles, where the condemned were allowed to drink strong liquors or wine, in order not to be too conscious of their destiny. Once arrived at Tyburn, the condemned found themselves in front of a crowded and noisy square; rich people even paid to sit on the stands erected for the occasion, in order to have an unobstructed view. Before the execution, the condemned were allowed to say a few words; the authorities expected that most of the condemned, before their death, before commending their own souls to God, would admit their guilt. This confession could be a real win for the justice system at that time and the majority of the condemned actually did that, but there are still many doubts on how much the capital punishment could be perceived as a social good by people, despite the large crowd attending the executions in any hanging day.

The corpse of the condemned

Among Tyburn's crowd, which was largely plebeian, one could find friends and relatives of the condemned, curious citizens, pickpockets and also anatomists and surgeons - who were particularly interested in taking away with them the corpse of the condemned, likely to improve the anatomical studies of that time. This often led to conflicts with the relatives - so much so that after several fights for the possession of the corpse, in 1752, the authorities adopted the Murder Act, which established that 'any corpse of people hanged for willful murder would be given to surgeons to be dissected and examined'. This act was adopted to decrease crime, taking advantage of the popular belief that the manipulation of the corpse by the anatomists could compromise the passage of the soul into the afterlife.

Another particularly popular belief was the power of the intact corpse of a hanged man, whose hand could cure cancers; indeed it was not uncommon to see mothers brushing their child's cheek with the hand of a hanged man.

All content from Kiddle encyclopedia articles (including the article images and facts) can be freely used under Attribution-ShareAlike license, unless stated otherwise. Cite this article:
Tyburn Facts for Kids. Kiddle Encyclopedia.