Newcastle, County Down facts for kids

Newcastle is a small seaside resort town in County Down, Northern Ireland, which had a population of 7,672 at the 2011 Census. It lies by the Irish Sea at the foot of Slieve Donard, the highest of the Mourne Mountains. Newcastle is known for its sandy beach, forests (Donard Forest and Tollymore Forest Park), and mountains. The town lies within the Newry, Mourne and Down District.

The town aims to promote itself as the "activity resort" for Northern Ireland. It has benefited from a multi-million pound upgrade to the promenade and main street. The town is twinned with New Ross, County Wexford, in the Republic of Ireland.

The name of the town is thought to derive from the castle built by Felix Magennis of the Magennis clan in 1588, which stood at the mouth of the Shimna River. This castle was demolished in 1830. The town is referred to as New Castle in the Annals of the Four Masters in 1433 so it is likely that he built on the site of an existing structure.

In the 17th century Ulster ports began to rise in prominence. In 1625 William Pitt was appointed as Customer of the ports of Newcastle, Dundrum, Killough, Portaferry, Donaghadee, Bangor and Holywood. The Montgomery Manuscripts record that Newcastle was besieged and later captured by Sir James Montgomery of the Ards in April 1642 in the aftermath of the 1641 Rebellion (pp. 128–134). Prior to 1641 the Castle belonged to the Magennis', but after the rebellion the property was confiscated and granted to Robert Hawkins, great grandfather to Robert Hawkins who assumed the surname of Magill. The date 1588 was inscribed on a stone placed over the front entrance of the Castle, built by Felix Magenis. Newcastle passed from the Magills to the Mathews, and subsequently to the Annesleys. In the late 1700s the Castle was modernised by the Matthews and then the Annesleys, and rented by the Board of Customs for the accommodation of revenue officers. Around 1830 the castle was demolished and the 'Annesley Arms Hotel' was constructed within the original castle compound. The 3rd Earl Annesley built a new 'marine residence', called 'Donard Lodge' on the lower mountain slope above the town (it was demolished in 1966). St. John's Church was also opened on 'The Rock' in 1832 to accommodate the visitors and growing population in Earl Annesley's developing seaside resort.

On 13 January 1843, boats from Newcastle and Annalong set out for the usual fishing stations, and were caught in a gale. 14 boats were lost in the heavy seas including a boat which had gone to the rescue. Only two boats survived, the Victoria and the Brothers. 76 men perished, 46 of whom were from Newcastle. They left twenty seven widows, one hundred and eighteen children, and twenty one dependants. A Public Subscription was raised and the cottages, known as Widows Row, were built for the widows and dependants. A local song about the disaster says "Newcastle town is one long street entirely stripped of men"

In 1910 Harry Ferguson flew a small plane across Newcastle beach in one of the first engine powered flights by aircraft in Ireland. He completed the flight in an attempt to win a £100 prize offered by the town for the first powered flight along the strand. His first take off ended badly, but according to a modern newspaper report 'He flew a distance of almost three miles along the foreshore at a low altitude varying between fifty and five hundred feet'. This event is recorded by a plaque on the promenade.

The town's history is poorly recorded and is held mostly by local people and their stories of the past. Information on the town is available on signs throughout the forests and hills. The Mourne Mountains is the setting for many local myths and legends. There are stories of 'The Blue Lady', a woman abandoned by her husband whose ghost still haunts the mountains, and more recently the idea of a wild cat living in the Mournes. Many of the stories although have true origins are only folklore and give many of the towns attractions their names, such as Maggie's Leap being named after a local girl called Maggie, who leapt over the impressive chasm to her death while fleeing soldiers with a basket of eggs. Many other places in the Newcastle area get their names from other sources, 'The Brandy Pad', a path through the mountains, is named so because of the illegal brandy smuggling that took place through the area. Another example is Bogey Hill just above the harbour at the Southern end of the town, which is named after the carts that carried Mourne granite from the quarry on Thomas' Mountain down to the harbour. In 1897, T.R.H the Duke and Duchess of York (George V and Queen Mary), grandparents to Elizabeth II, visited Newcastle to open the Slieve Donard Hotel. Afterwards they visited Hugh Annesley, 5th Earl Annesley at Castlewellan Castle.

A process of preserving the local history has begun since 2014 via a community Facebook page 'History of Newcastle, Co. Down'. Photographs and information on the area's history are being collected via the page, and a history of the town will be published. Greater historical detail about the town will be added to this page as part of this research process. It is hoped that this collective history will enhance the experience of both locals and tourists by promoting an informed historical appreciation for the area.

Newcastle was fortunate enough to escape the worst of the Troubles and its residents both Catholic and Protestant lived in relative peace with each other though there has been considerable objection to loyalist band parades in the town.

Newcastle is classified as a small town by the Northern Ireland Statistics and Research Agency (NISRA) (i.e. with population between 4,500 and 10,000 people). As of the 2011 census there were 7,672 people living in Newcastle. Of these:

Newcastle is a popular seaside resort and attracts visitors from elsewhere in Northern Ireland and from abroad. In 2007 the new promenade won a number of National awards including a Civic Trust Award for Excellence in the Public Realm. In recent years the town has started a large Halloween festival, with a carnival-like atmosphere. The free event includes fireworks and a fancy dress competition.

Newcastle is home to Northern Ireland's highest mountain, Slieve Donard, which is in the Mourne mountain range. Visitors come to walk in the Mourne Mountains, made famous by the song by Percy French. Another popular attraction in the town is Royal County Down Golf Club (venue for the 2007 Walker Cup and 2015 Irish Open), which has been described as one of the ten best in the world, and is said to be one of Tiger Woods' favourite golf courses. The town is also known for Mourne Granite, which was quarried here for many years and shipped all round the world. It was used to make paving stones in many cities including London and New York. Mourne granite is also being used to make the base of the 9/11 memorial in New York. 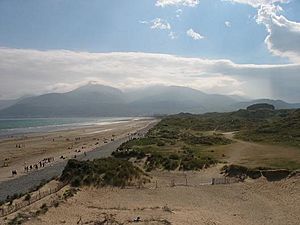 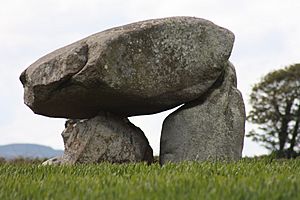 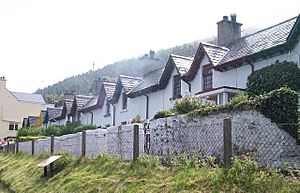 Widows' Row. This is a terrace of twelve small houses built by public subscription to house the widows and orphans of 46 fishermen lost in the storm of 1843.

Newcastle railway station began operating on 25 March 1869 and closed on 2 May 1955. The Belfast & County Down Railway Station and Clock Tower is a B1 listed, red brick building, built in 1905; It is currently a Lidl supermarket. The Great Northern Railway of Ireland Station Building is used by Ulsterbus, which runs buses to the Europa Buscentre next to Belfast Great Victoria Street railway station in Belfast, as well as other towns in the area.

Newcastle Harbour is home to Newcastle Yacht Club who regularly sail and race in Dundrum Bay.

All content from Kiddle encyclopedia articles (including the article images and facts) can be freely used under Attribution-ShareAlike license, unless stated otherwise. Cite this article:
Newcastle, County Down Facts for Kids. Kiddle Encyclopedia.