The Mourne Mountains ( morn; Irish: Beanna Boirche), also called the Mournes or Mountains of Mourne, are a granite mountain range in County Down in the south-east of Northern Ireland. They include the highest mountains in Northern Ireland, the highest of which is Slieve Donard at 850 m (2,790 ft). The Mournes are designated an Area of Outstanding Natural Beauty and it has been proposed to make the area Northern Ireland's first national park. The area is partly owned by the National Trust and sees many visitors every year. The Mourne Wall crosses fifteen of the summits and was built to enclose the catchment basin of the Silent Valley and Ben Crom reservoirs. 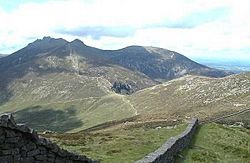 The name 'Mourne' is derived from the name of a Gaelic clan or sept called the Múghdhorna. The common Irish name for the mountains, na Beanna Boirche, may mean "the peaks of the peak district" or "peaks of Boirche" (a mythical king and cowherd); it was historically Englished as 'Bennyborfy'.

Some of the mountains have names beginning "Slieve", such as Slieve Donard, Slieve Lamagan and Slieve Muck, which is derived from the Irish word sliabh, meaning "mountain". There are also a number of curious names: Pigeon Rock; Buzzard's Roost; Brandy Pad; the Cock and Hen; Percy Bysshe; the Devil's Coach Road; and Pollaphuca (from poll meaning "hole" and púca meaning "ghost or spirit").

On clear days, the Mourne Mountains can be seen from the Isle of Man and Dublin.

The below sub-headings detail other features and visitor attractions found in the Mourne Mountains. 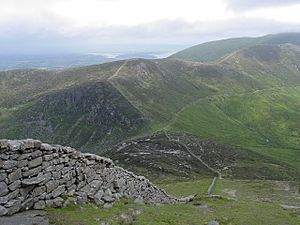 The Mourne Wall is a dry stone wall measuring 31.4 km (19.5-mile) long that crosses fifteen summits and was constructed to define and protect the 36 km2 (8,900-acre) catchment area purchased by Belfast Water Commissioners in late nineteenth century. This followed a number of Acts of Parliament allowing the sale, and the establishment of a water supply from the Mournes to the growing industrial city of Belfast. Construction of the Mourne Wall was started in 1904 and was completed in 1922.

The Mourne Wall is a listed building since 1996 and 600 repairs were completed in 2018 by Geda Construction. 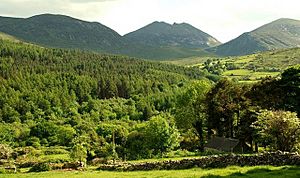 Tollymore forest and the Mournes

Tollymore Forest Park is located at Bryansford, near the town of Newcastle in the Mourne and Slieve Croob Area of Outstanding Natural Beauty. It covers an area of 630 hectares (1,600 acres) at the foot of the Mourne Mountains and has views of the surrounding mountains and the sea at nearby [Newcastle]. The Shimna River flows through the park where it is crossed by 16 bridges, the earliest dating to 1726. The river is a spawning ground for salmon and trout and is an Area of Special Scientific Interest due to its geology, flora and fauna. The forest has four walking trails signposted by different coloured arrows, the longest being the "long haul trail" at 8 miles (13 km) long. The Forest Park has been managed by the Forest Service since they purchased it from the Roden Estate in 1941.

Donard Forest is located near Newcastle, County Down, Northern Ireland. It borders Donard Park at the foot of the Mourne Mountains. The Glen River flows through the forest where it is crossed by three stone bridges.

Rostrevor Forest is located near the village of Rostrevor, County Down, Northern Ireland. It lies between the Mourne Mountains and Carlingford Lough, in the Mourne Area of Outstanding Natural Beauty. The first trees, primarily sitka spruce, douglas fir and pine, were planted in 1931. 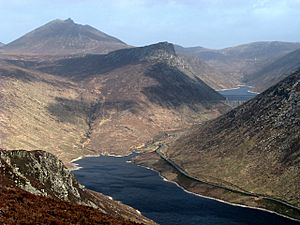 Silent Valley and Ben Crom reservoirs seen from the south

All water reservoirs are owned and maintained by Northern Ireland Water (NIW).

Silent Valley Reservoir is a reservoir located in the Mourne Mountains near Kilkeel, County Down in Northern Ireland. It supplies most of the water for County Down, surrounding counties and most of Belfast via the Aquarius pipeline. The reservoir was built between 1923 and 1933 by a workforce of over one thousand men, nine of whom died during construction. The catchment area is 9,000-acres (3,600 ha / 36 sq. km).

Ben Crom Reservoir is a reservoir located upstream of Silent Valley near Kilkeel, County Down, Northern Ireland. Along with Silent Valley Reservoir, which is situated further down the Kilkeel River valley, it supplies water for County Down, surrounding counties and most of Belfast. It was constructed between 1953 and 1957.

Fofanny Dam Reservoir is located approximately 2 km north-east of Spelga Dam and is a much smaller site.

Aside from grasses, the most common plants found in the Mournes are heathers and gorse. Of the former, three species are found: cross-leaved heath, bell heather, and common heather. Of the latter, two species are found: common gorse and western gorse. Other plants which grow in the area are: common cottongrass, roseroot, harebell, marsh St John's-wort, wild thyme, wood sorrel and heath spotted orchid.

Sheep graze high into the mountains, and the range is also home to birds, including the raven, peregrine falcon, wren, buzzard, meadow pipit, grey wagtail, stonechat and snipe. The golden eagle, a former inhabitant, has not been seen in the Mournes since 1836. 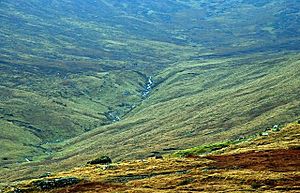 Mourne country near Spelga Dam, the slopes of Slieve Loughshannagh and Ott Mountain with a stream in spate after some recent heavy rain

It has been proposed that the Mourne Mountains be made Northern Ireland's first national park. The plan has been subject to controversy because of the area's status as private property, with over 1,000 farmers based in the proposed park, and also because of fears over the impact on local communities, bureaucracy and house prices. 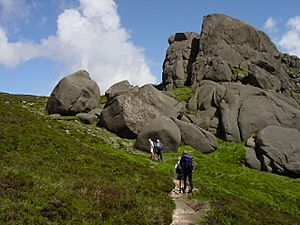 "Discover Northern Ireland", a website operated by Tourism NI, aids to promote the Mourne Mountains as a popular destination for hiking and taking in views of the surrounding landscape, including local forests and the coastline. The Mournes offer a range of activities for visitors. These include hiking, forest and beach walks, cycling and rock climbing, with nearly three quarters of visitors choosing the Mournes to go walking and hiking.

The Mournes are very popular as a destination for completing expeditions as required for completing the Duke of Edinburgh's Award. However, there are also a number of walking challenges which take place in the Mournes. The Mourne Wall challenge, which is also referred to as the 7-peak challenge because it takes into account 7 of the 10 highest Mourne mountains, is advertised by WalkNI. The Mourne six peak challenge is advertised by DiscoverNI and takes hikers up Slieve Donard, Commedagh, Bearnagh, Slieve Binnian, Slieve Meelmore and Slieve Meelbeg across three days of hiking.

Information and statistics on tourism to the Mournes was gathered by TourismNI in 2014. On a survey of leisure visitors, 79% were found to come from Northern Ireland itself, 15% were from the remaining areas of the British Isles and Republic of Ireland, leaving 5-6% accounting for international visitors. Of all visitors, two thirds usually visit the Mournes on a single day trip rather than choosing an overnight trip and party sizes have averaged between 3 - 4 people.

There are many granite cliffs, in the form of outcrops and tors, scattered throughout the range, making the Mournes one of Northern Ireland's major rock-climbing areas since the first recorded ascents in the 1930s. The rock forms are generally quite rounded, thus often depending on cams for protection, but with good friction. The 1998 guidebook lists 26 separate crags, with a total of about 900 routes of all grades.

Since 2015, German-owned company ABO Wind has applied to build a wind farm at Gruggandoo in the western Mourne Mountains. Its first two applications were turned down, and its revised application is to build eight turbines standing 142 metres (466 ft) high, along with a network of access tracks, substations and a control building. The turbines would be among the tallest structures in Ireland. The company claims they could power 37% of homes in the district. There is opposition, as the wind farm would be in an Area of Outstanding Natural Beauty and would impact wildlife and habitats. Local protest group, Mourne AONB Against Windfarms, warn it would open the door for further wind farms to be built in the Mournes and other protected areas. Planning officers for Newry, Mourne and Down District Council deem the wind farm "unacceptable" and recommended the council reject it. In 2020, councillors instead voted to ask for a public inquiry.

On 23 October 2010 an AgustaWestland AW109 (tail number: N2NR) was operating a VFR flight from Enniskillen Airport to Caernarfon Airport, Wales. While en route the helicopter crashed into the western side of Shanlieve, killing all three passengers and crew on board. The cause of the accident was determined to be pilot error in heavy fog.

All content from Kiddle encyclopedia articles (including the article images and facts) can be freely used under Attribution-ShareAlike license, unless stated otherwise. Cite this article:
Mourne Mountains Facts for Kids. Kiddle Encyclopedia.