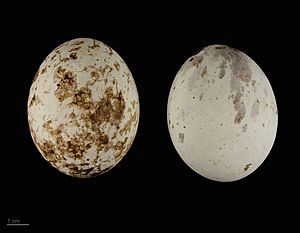 The common buzzard (Buteo buteo) is a bird of prey, very widespread in the Old World. It lives in most of Europe and into Asia. It is between 51 and 57 cm in length. The wings are between 110–150 cm (48–60 inch) when spread out. They may be coloured from almost pure white to black. Usually, they are brown.

It breeds in woodlands. It hunts over open land. It eats mainly small prey, such as insects, rodents, small birds and eggs. It may also take prey heavier than itself, like adult grouse, and rabbits. It can be seen walking over recently ploughed fields looking for worms and insects.

Buzzards do not normally form flocks, but several may be seen together on migration or in a good habitat. Pairs mate for life.

Some 16 subspecies have been described and up to 11 may be valid. Some authors accept as few as seven. 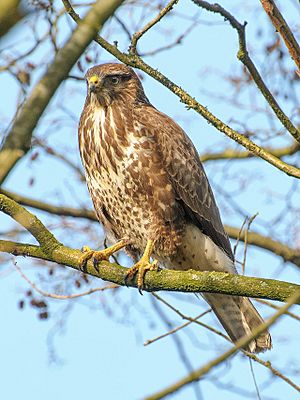 A typical brown buzzard of the race (B. b. buteo) in the Netherlands.

All content from Kiddle encyclopedia articles (including the article images and facts) can be freely used under Attribution-ShareAlike license, unless stated otherwise. Cite this article:
Common buzzard Facts for Kids. Kiddle Encyclopedia.