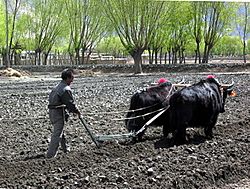 Two animals pulling a plow with a farmer behind it 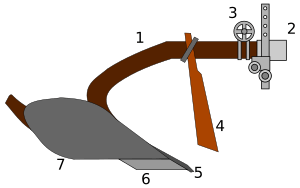 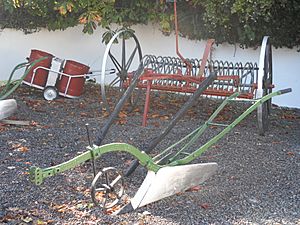 The diagram (right) shows the basic parts of the modern plough:

Other parts not shown or labelled include the frog (or frame), runner, landside, shin, trashboard, and stilts (handles).

On modern ploughs and some older ploughs, the mouldboard is separate from the share and runner, so these parts can be replaced without replacing the mouldboard. Abrasion eventually destroys all parts of a plough that come into contact with the soil.

Early in the agricultural revolution, simple hand-held digging sticks or hoes would have been used in areas with good soil, such as the area near the Nile River in Africa. At the Nile, the annual flood makes the soil better by rejuvenating it, to create places where seeds could be planted. To help crops grow in areas where floods were rare, the soil had to be rejuvenated in a different way. This is when plowing was first used, and hoes were the first plows.

All content from Kiddle encyclopedia articles (including the article images and facts) can be freely used under Attribution-ShareAlike license, unless stated otherwise. Cite this article:
Plough Facts for Kids. Kiddle Encyclopedia.