Schenley Park is a large municipal park located in Pittsburgh, Pennsylvania, between the neighborhoods of Oakland, Greenfield, and Squirrel Hill. It is also listed on the National Register of Historic Places as a historic district. In 2011, the park was named one of "America's Coolest City Parks" by Travel + Leisure.

The park is made up of 300 acres (120 ha) donated by Mary Schenley in 1889 and another 120 acres (49 ha) that the city subsequently purchased from her. Another 36 acres (15 ha) were acquired at a later date, bringing the park's total size to 456 acres (185 ha), and making it the second largest municipal park in Pittsburgh, behind Frick Park. 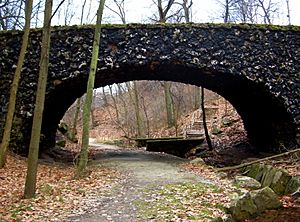 Stone footbridge over Panther Hollow Run, below the visitor's center.

Schenley Park features a grand entrance, Schenley Plaza, and several miles of hiking trails and a large pond in Panther Hollow. Across from the Phipps Conservatory is Flagstaff Hill, a popular place to watch outdoor movies in the summer.

In the early days of Schenley Park, the area known as "The Oval" was used for horse racing. Today, it has 13 tennis courts, an all weather running track, and a soccer field. There is also an ice skating rink, public swimming pool, and an 18-hole disc golf course nearby.

Schenley Park also contains the Bob O'Connor Golf Course. The golf course includes an indoor practice facility where golfers can play a "virtual" round on Pebble Beach and other famous courses.

Since 1983, Schenley Park has been home to a vintage motor sports car race, the Pittsburgh Vintage Grand Prix, that takes place annually in mid-July. Additionally, since 1993, the park has been home to the Komen Pittsburgh Race for the Cure, an annual fundraising event for breast cancer and Mother's Day tradition with more than 35,000 participants. Carnegie Mellon University's annual Spring Carnival contests its Sweepstakes, a buggy race, on Tech Avenue, Schenley Drive, and Frew Street. 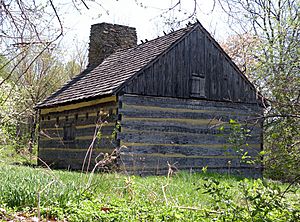 Neill Log House in Schenley Park, built circa 1787 (or before), once belonged to the family of Robert Neill, and later to Col. James O'Hara and his granddaughter Mary Schenley (for whom the park is named).

In 1842, Mary Elizabeth Croghan of Pittsburgh, who was 15 at the time, eloped with 43-year-old Captain Edward Schenley. The couple moved to England. Mary's father attempted to terminate her inheritance in a lawsuit, but was unsuccessful. Mary's maternal grandfather, General James O'Hara, bequeathed to her a parcel of land known as the "Mt. Airy Tract." 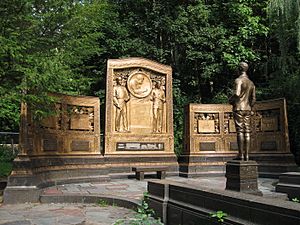 The Westinghouse Memorial in Schenley Park

Mary's wealth attracted the attention of several land developers in the Pittsburgh area as well as Edward Bigelow, the Director of the Department of Public Works in Pittsburgh. In 1889, Bigelow learned that the agent of a land developer planned to travel to London to attempt to purchase the land from Mary. Bigelow sent an East Liberty lawyer by train to New York City where he then boarded a steamer bound for England. The lawyer beat the real estate agent by two days.

After negotiations with Mary, Bigelow's lawyer entered into an agreement to give 300 acres (1.21 km²) of the Mt. Airy Tract to the city of Pittsburgh with an option to purchase 120 (0.49 km²) more, under the conditions that the park be named after her and never be sold. The city agreed and immediately purchased the additional 120 acres (0.49 km²) of land. 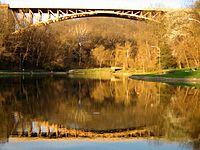 Bigelow began to develop the newly renamed Schenley Park for recreational uses. He hired William Falconer to lead the Phipps Conservatory & Botanical Gardens which was built in 1893. In 1895, Andrew Carnegie built the Carnegie Museum and Music Hall, establishing Oakland and Schenley Park as a cultural icon.

Forbes Field, the home field of the Pittsburgh Pirates, was adjacent to Schenley Park during its lifespan (1909–1970).

All content from Kiddle encyclopedia articles (including the article images and facts) can be freely used under Attribution-ShareAlike license, unless stated otherwise. Cite this article:
Schenley Park Facts for Kids. Kiddle Encyclopedia.