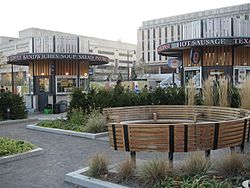 Schenley Plaza is a public park serving as the grand entrance into Schenley Park in Pittsburgh, Pennsylvania.

The 4.5-acre (18,000 m2) plaza, located on Forbes Avenue and Schenley Drive in the city's Oakland district, includes multiple gardens, food kiosks, public meeting spaces, a carousel, and a prominent 1.0-acre (4,000 m2) "Emerald Lawn" with free wireless internet access. The plaza is the site of the Mary Schenley Memorial Fountain, the Christopher Lyman Magee Memorial, the University of Pittsburgh's Frick Fine Arts Building, and formerly the Stephen Foster sculpture. The plaza is also surrounded by many prominent landmarks, including the University of Pittsburgh's Cathedral of Learning, Stephen Foster Memorial, Hillman Library, and Posvar Hall as well as the Carnegie Institute and its Dippy sculpture. 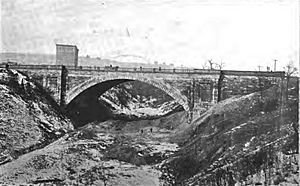 The site of Schenley Plaza had been a deep gully called St. Pierre's Ravine, which connected to Junction Hollow. The ravine separated the new Carnegie Institute (1895) from the even newer Forbes Field (1909–1970). Linking these two civic institutions was a stone arch bridge: Bellefield Bridge. It carried Bigelow Boulevard toward Schenley Park.

Sentiment arose that Bellefield Bridge was not a sufficiently impressive park entrance. Also in 1911 a place was being sought for a monument to Mary Schenley, patroness of the park. The idea grew that a great public square, both for the memorial and the park entrance, was needed.

A national competition elicited 45 proposals for the site, and in June 1915, judges selected the plan of Horace Wells Sellers and H. Bartol Register, both of Philadelphia.

Between 1913 and 1914 St. Pierre's Ravine was filled in. The fill has been popularly said to be earth removed from Downtown's infamous "Hump" on Grant Street, but the supporting historical information for this story is disputed. The Bellefield Bridge remains buried here and supports some of the weight of the Mary Schenley Memorial Fountain on the plaza.

In 1949 Schenley Plaza was converted into a parking lot to accommodate both university students and fans at Forbes Field, then home to the Pittsburgh Pirates and Pittsburgh Steelers, which stood on the west side of the plaza. 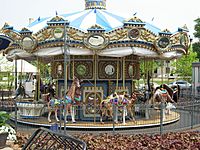 From 2004–2006 the Pittsburgh Parks Conservancy oversaw a major renovation of the plaza, funded in part by the Oakland Investment Committee, restoring it as a grand entrance to the park. It now offers green space: a 1-acre (4,000 m2) lawn, ever-changing ornamental gardens, and landscaping featuring plants native to Western Pennsylvania. Other features include benches, public programming, food kiosks, amenities such as free wireless service for computers, and a Victorian-style carousel as a featured family attraction. In 2009, the Schenley Plaza renovation won the Silver Award in the Environmentally Sustainable Project category at the 2009 International Awards for Livable Communities held in the Czech Republic city of Plzeň.

Schenley Plaza is operated by the Pittsburgh Parks Conservancy and is maintained in partnership with the City of Pittsburgh. It is open dawn to dusk.

View from the southwest corner of Schenley Plaza. The University of Pittsburgh's Cathedral of Learning, Stephen Foster Memorial, and Heinz Chapel can be seen on the left. Across the plaza, behind the trees, is the Carnegie Institute and Library complex.

All content from Kiddle encyclopedia articles (including the article images and facts) can be freely used under Attribution-ShareAlike license, unless stated otherwise. Cite this article:
Schenley Plaza Facts for Kids. Kiddle Encyclopedia.