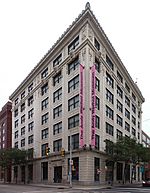 Opened on May 15, 1994, the Andy Warhol Museum is the first museum to exclusively focus on an American postwar artist. The museum's collection includes over 4,000 Warhol art works in all media - paintings, drawings, prints, photographs, sculptures, and installation; the entire Andy Warhol Video Collection, 228 four-minute Screen Tests, and 45 other films by Warhol; and extensive archives, including Warhol's Time Capsules. While dedicated to Andy Warhol, the museum also hosts many exhibits by contemporary artists.

When Andrew Carnegie envisioned a museum collection consisting of the "Old Masters of tomorrow", the Carnegie Museum of Art became, arguably, the first museum of modern art in the United States. Founded in 1895, today it continues showcasing contemporary art by staging the Carnegie International exhibition every few years. Numerous works from the International exhibitions have been acquired for the museums' permanent collection including Winslow Homer's The Wreck (1896) and James A. McNeill Whistler's Arrangement in Black: Portrait of Señor Pablo de Sarasate (1884). The marble Hall of Sculpture replicates the interior of the Parthenon. The Hall of Architecture contains the largest collection of plaster casts of architectural masterpieces in America and one of the three largest in the world. The Heinz Architectural Center, opened as part of the museum in 1993, is dedicated to the collection, study, and exhibition of architectural drawings and models. In 2001 the museum acquired the archive of African-American photographer Charles "Teenie" Harris, consisting of approximately 80,000 photographic negatives spanning from the 1930s to the 1970s. Many of these images have been catalogued and digitized and are available online via the Carnegie Museum of Art Collections Search.

From the discovery of Diplodocus carnegii to the most complete Tyrannosaurus rex known to date passing by a brand new, yet-to-be-named species of oviraptorosaur, Carnegie Museum of Natural History displays 230 dinosaur objects. Other exhibits include Hillman Hall of Minerals and Gems, Alcoa Foundation Hall of American Indians, Polar World: Wyckoff Hall of Arctic Life, Walton Hall of Ancient Egypt, and Benedum Hall of Geology. The museum's Powdermill Nature Reserve was established in 1956 to serve as a field station for long-term studies of natural populations, and now forms the core of the museum's Center for Biodiversity and Ecosystems. Research teams including Carnegie scientists have made discoveries such as Puijila darwini, Castorocauda lutrasimilis, and Hadrocodium wui. 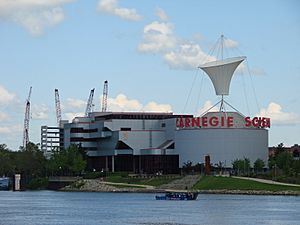 Opened in 1991, but with a history that dates to October 24, 1939, the Carnegie Science Center is the most visited museum in Pittsburgh. Among its attractions are the newly constructed Buhl Planetarium (which features the latest in digital projection technology), the Rangos Omnimax Theater, SportsWorks, the Miniature Railroad & Village, the USS Requin, a World War II submarine, and Roboworld.

All content from Kiddle encyclopedia articles (including the article images and facts) can be freely used under Attribution-ShareAlike license, unless stated otherwise. Cite this article:
Carnegie Museums of Pittsburgh Facts for Kids. Kiddle Encyclopedia.