Kids Encyclopedia Facts
Not to be confused with Carnegie Art Museum (Oxnard, California).

The Carnegie Museum of Art, abbreviated CMOA, is an art museum in the Oakland neighborhood of Pittsburgh, Pennsylvania. The museum was founded in 1895 by the Pittsburgh-based industrialist Andrew Carnegie. The museum collects contemporary art, including film and video works. It was the first museum in the United States with a primary focus on contemporary art. As instructed by its founder Andrew Carnegie at the inception of the Carnegie International in 1896, the museum has been organizing many contemporary exhibitions that showcase the "Old Masters of tomorrow".

The museum's origins can be traced to 1886 with Andrew Carnegie's initial concept: "I am thinking of incorporating with the plan for a library that of an art-gallery in which shall be preserved a record of the progress and development of pictorial art in America." Dedicated on November 5, 1895, the art gallery was initially housed in the Carnegie Libraries of Pittsburgh Main Branch in Oakland.

Carnegie envisioned a museum collection consisting of the "Old Masters of tomorrow" and the Carnegie Museum of Art became, arguably, the first museum of modern art in the United States. The museum received a major expansion in 1907 with the addition of the Hall of Architecture, Hall of Sculpture, and Bruce Galleries, with funds again provided by Carnegie.

Under the directorship of Leon Arkus, the Sarah Mellon Scaife Gallery (125,000 square feet) was built as an addition to the existing Carnegie Institute. Designed by architect Edward Larrabee Barnes, it first opened in 1974 and more than doubled the museum's exhibition space, plus added a children's studio, theater, offices, café, and bookstore. The New York Times art critic John Russell described the gallery as an "unflawed paradise." The gallery has been renovated several times since its original creation, most recently in 2004.

Today the museum continues Carnegie's love of contemporary art by staging the Carnegie International every few years. Numerous significant works from the Internationals have been acquired for museum's permanent collection including Winslow Homer's The Wreck (1896) and James A. McNeill Whistler's Arrangement in Black: Portrait of Señor Pablo de Sarasate (1884). 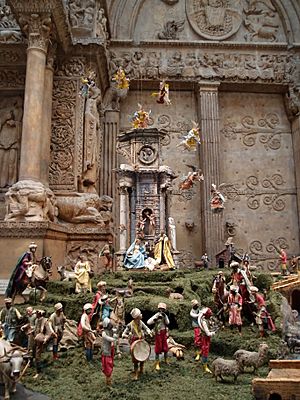 Neapolitan presepio seasonally displayed at the Carnegie Museum of Art

The museum's curatorial departments include: Fine Arts (Contemporary Art, Works on Paper), Decorative Arts, Architecture, and Photography. The museum presents as many as 15 changing exhibitions annually. Its permanent collection comprises roughly 35,000 works and includes European and American decorative arts from the late seventeenth century to the present, works on paper, paintings, prints (notably Japanese prints), sculptures and installations. The museum has notably strong collections of both aluminum artifacts and chairs. Approximately 1,800 works are on view at any given time.

In 2001, the museum acquired the archive of African-American photographer Charles "Teenie" Harris, consisting of approximately 80,000 photographic negatives spanning from the 1930s to the 1970s. The museum is working with a Teenie Harris Advisory Committee to identify the photographs. Many of these images have been catalogued and digitized and are available online via the Carnegie Museum of Art Collections Search.

Heinz Architectural Center: Established in 1990 with a gift from Mrs. Henry J. Heinz II, the Heinz Architectural Center enhances appreciation and understanding of architecture and the built environment through exhibitions, lectures, charettes, symposia, and other forms of public engagement. Its collection of nearly 6,000 objects includes drawings, models, photographs, artifacts, games, ephemera, and the world's third-largest collection of plaster architectural casts. Ranging from the late 18th century to the present, the collection represents work in architecture, landscape design, engineering, and furniture and interior design by architects of international, national, and regional significance. Areas of strength are residential architecture and leading contemporary British architects; recent collecting activity has focused on the work of emerging practices around the world. In addition to 4,000 square feet of exhibition space, the Heinz Architectural Center's facility, designed by Cicognani Kalla Architects, includes a library housing several thousand books, journals, and other types of printed material.

The Hillman Photography Initiative is an incubator for innovative thinking on the photographic image. The inaugural year of the initiative centered on four projects that, taken together, investigated the boundaries and possibilities of photography through the way that an image travels. Conceived through an open, discursive process, unique in a museum setting, these projects included live public events at the museum, a pop-up reading room in the galleries, two collaborative web-based projects, and a series of commissions, including documentary videos, art projects, and writing. 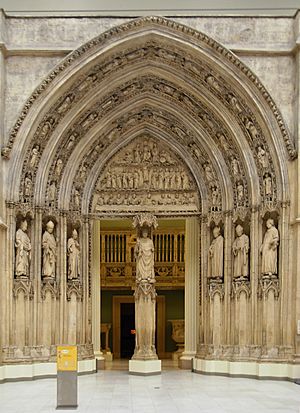 Over the past 75 years, more than 100,000 children of all ages have attended Saturday art classes in the galleries of Carnegie Museum of Art. Alumni of the program include Andy Warhol, photographer Duane Michals, and contemporary artist Philip Pearlstein. The museum has an array of programs that are specific to one's age group as well. There are some for children, teens, adults, and there are even some dedicated to school educators. The Carnegie Museum of Art was named 5th most child-friendly art museum in the U.S. by Child magazine.

All content from Kiddle encyclopedia articles (including the article images and facts) can be freely used under Attribution-ShareAlike license, unless stated otherwise. Cite this article:
Carnegie Museum of Art Facts for Kids. Kiddle Encyclopedia.