It is at 4400 Forbes Avenue in the Oakland neighborhood of Pittsburgh, Pennsylvania, USA. It was founded by the Pittsburgh-based industrialist Andrew Carnegie in 1896.

It has an international reputation for research and is ranked among the top five natural history museums in the United States.

Notable specimens include one of the world's only fossils of a juvenile Apatosaurus, the world's first specimen of a Tyrannosaurus rex, and a recently identified species of oviraptorosaur named Anzu wyliei. 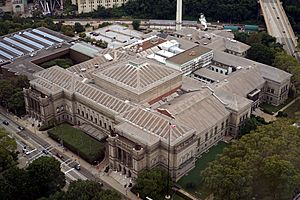 All content from Kiddle encyclopedia articles (including the article images and facts) can be freely used under Attribution-ShareAlike license, unless stated otherwise. Cite this article:
Carnegie Museum of Natural History Facts for Kids. Kiddle Encyclopedia.