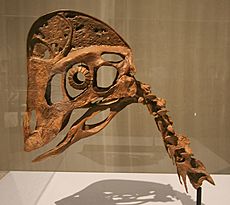 Anzu is a genus of oviraptorosaurian dinosaurs from the latest Cretaceous, 66 million years ago (mya). Its remains were found in North and South Dakota. The type species is Anzu wyliei.

Anzu wyliei had a toothless beak, a prominent crest, long arms ending in slender relatively straight claws, long powerful legs with slender toes, and a very long tail. In life, the animal was about 3 metres (9.8 ft) to 3.5 metres (11 ft) long and 200 kilograms (440 lb) to 300 kilograms (660 lb) in weight. It was one of the largest known oviraptorosaurs and the largest known from North America (though the giant Mongolian oviraptorosaur Gigantoraptor was far larger).

The type species is the first well-preserved example of a North American oviraptorosaur. According to a paleontologist at the Smithsonian "for almost a hundred years, the presence of oviraptorosaurs in North America was only known from a few bits of skeleton, and the details of their appearance and biology remained a mystery. With the discovery of A. wyliei, we finally have the fossil evidence to show what this species looked like and how it is related to other dinosaurs". The creature's formidable appearance – "big crests on their skulls, a beak, no teeth, and a very bird-like skeleton" – led to it being jokingly called the "chicken from hell" in press releases.

The fossils of Anzu wyliei were found in mudstone rock that had once been part of ancient floodplains. Its Asian counterparts lived in arid or semi-arid conditions.

Its lifestyle was that of "a fast-running, ecological generalist that didn't quite fit the usual moulds of meat-eating or plant-eating dinosaur". It was not on the direct line of descent of modern birds, but it did have bird-like features:

The function of Anzu's large crest is debated. The crest "is very large and made of paper-thin bone, so it was not able to take much stress. All oviraptosaurs have this crest but it is certainly the largest in A. wyliei". The most likely function is for display, signalling to members of its own species. Also, it might be used to attract a mate.

The fossils showed evidence of injuries, including a healed broken rib and an arthritic toe that was probably the result of a tendon being ripped away from the bone. It is not known whether this indicates that the animals fought each other, or were injured by predators.

All content from Kiddle encyclopedia articles (including the article images and facts) can be freely used under Attribution-ShareAlike license, unless stated otherwise. Cite this article:
Anzu Facts for Kids. Kiddle Encyclopedia.