Gigantoraptor is a genus of giant oviraptorosaur theropod dinosaur that lived 70 million years ago in the later Cretaceous. It was discovered in 2005 in Inner Mongolia.

Since 2001, in a quarry, remains of the sauropod Sonidosaurus had been uncovered. In April 2005 Chinese paleontologist Xu Xing was asked to reenact the discovery of Sonidosaurus for a Japanese documentary. Xu obliged them by digging out a thighbone. As he wiped the bone clean, he suddenly realized it was not from a sauropod, but from an unidentifiable theropod about the size of Albertosaurus. He stopped the filming to secure the serendipitous find. This way, the discovery of the Gigantoraptor fossil was captured on videotape.

In 2007 the Gigantoraptor erlianensis was named and described by Xu and colleagues. The type specimen was found in strata dating to about 70 million years ago. It is the remains of a single subadult individual.The partial skeleton lacks the skull but includes the lower jaws, a single neck vertebra, most of the back, tail and leg elements. 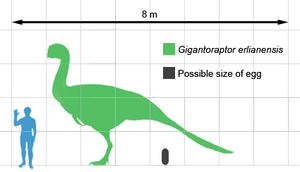 Gigantoraptor belonged to the Oviraptorosauria, a group named after Oviraptor. Compared to other known members, Gigantoraptor was much larger, about three times as long and 35 times more massive than the earlier discovered oviraptorosaurid Citipati. Xu et al. estimated the length at 8 metres (26 ft) and the weight at 1400 kilogrammes. In 2010 Gregory S. Paul even gave an estimate of two tonnes (2.2 tons).

The toothless lower jaws of Gigantoraptor are fused into a broad shovel-like mandibula. The skull would have been over half a metre long and toothless, probably with a horny beak. The back tail vertebrae are lightened by spongeous bone. The front limb is rather long because of an elongated slender hand. The humerus is bowed outwards to an exceptionally large extent and has a very rounded head. The first metacarpal is very short and carries a strongly diverging thumb. The hindlimb is also long because of an elongated lower leg. The thighbone is relatively slender and short with a distinct head and neck. The foot is robust with large and strongly curved toe claws.

No direct evidence of feathers was preserved with the skeleton. It might have been "naked" because it is three hundred times more massive than the smaller feathered species. Very large animals rely more on mass for temperature regulation, losing the insulating coverings found on their smaller relatives. Arm feathers were probably still present on Gigantoraptor, since their main functions, such as display and covering the eggs while brooding, are not related to the regulation of body heat.

In 2007 Xu et al. put Gigantoraptor into the Oviraptoridae family. But in 2010 a second analysis of Gigantoraptor found it was in the sister group, the Caenagnathidae. This was later confirmed by other studies.

The diet of Gigantoraptor is uncertain. Although some oviraptorosaurs such as Caudipteryx and Incisivosaurus are thought to have been mostly herbivorous, Gigantoraptor had long hind legs with proportions that allowed for fast movement, and large claws, a combination that is not usually found in herbivores of this size. Paul suggested that Gigantoraptor also was a herbivore and used its speed to escape predators.

The specimen has advanced ossification and growth rings in the fibula that indicate it was likely eleven years of age when it died. It appears to have reached an early young adult stage at age seven, and probably would have grown much larger when it reached the adult stage. This indicates a growth rate that is faster than in most large non-avian theropods.

The existence of giant oviraptorosaurians as Gigantoraptor explains several earlier Asian finds of very large, up to 53 centimetres long, oviraptorosaurian eggs. These fossil eggs were laid in enormous rings with a diameter of three metres.

All content from Kiddle encyclopedia articles (including the article images and facts) can be freely used under Attribution-ShareAlike license, unless stated otherwise. Cite this article:
Gigantoraptor Facts for Kids. Kiddle Encyclopedia.