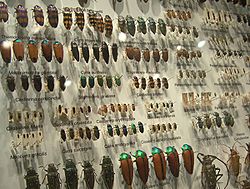 Part of a large beetle collection

Entomology is the science of insects. People who study insects are called entomologists. Insects have been studied since prehistoric times, but it was not until as early as the 16th century that insects were scientifically studied.

Entomologists meet to talk about their study of insects and to share ideas, just as all scientists do.

All content from Kiddle encyclopedia articles (including the article images and facts) can be freely used under Attribution-ShareAlike license, unless stated otherwise. Cite this article:
Entomology Facts for Kids. Kiddle Encyclopedia.