Karl Ritter von Frisch (20 November 1886 – 12 June 1982) was an Austrian ethologist who received the Nobel Prize in Physiology or Medicine in 1973, along with Nikolaas Tinbergen and Konrad Lorenz.

His work centered on investigations of the sensory perceptions of the honey bee and he was one of the first to translate the meaning of the waggle dance. His theory, described in his 1927 book Aus dem Leben der Bienen (translated into English as The Dancing Bees), was disputed by other scientists and greeted with skepticism at the time. Only much later was it shown to be an accurate theoretical analysis.

Karl von Frisch was the son of the surgeon and urologist Anton von Frisch (1849-1917), by his marriage to Marie Exner. Karl was the youngest of four sons, all of whom became university professors.

Karl studied in Vienna under Hans Leo Przibram and in Munich under Richard von Hertwig, initially in the field of medicine, but later turned to the natural sciences. He received his doctorate in 1910 and in the same year started work as an assistant in the zoology department of the University of Munich. 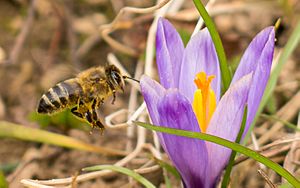 In 1912 he became a lecturer in zoology and comparative anatomy there; and in 1919 was promoted to a professorship. His research on honeybees was continued by his student Ingeborg Beling. In 1921 he went to Rostock University as a professor of zoology and director of an institute. In 1923 he accepted the offer of a chair at Breslau University, returning in 1925 to Munich University, where he became the head of the institute of zoology.

Von Frisch attracted negative attention from the Nazi regime, among other things for employing Jewish assistants, including many women, and for practicing "Jewish science". Eventually Frisch was forced into retirement, but the decision was reversed because of his research on nosema infections in bees.

The institute of zoology was destroyed in the Second World War, and in 1946 Frisch went to work at the University of Graz, remaining there until 1950, when he returned to the reopened Munich institute. He retired in 1958 but continued his research.

Karl von Frisch married Margarete, née Mohr, who died in 1964. Their son, Otto von Frisch, was director of the Brunswick natural history museum between 1977 and 1995. 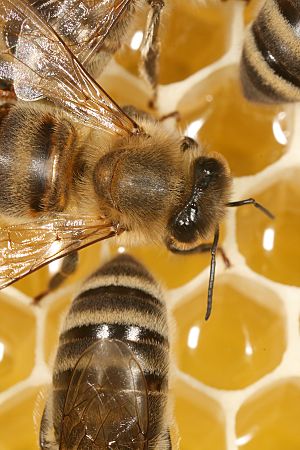 The Carniolan honey bee is a subspecies of Western honey bee. It originates from Slovenia, but can now be found also in Austria, part of Hungary, Romania, Croatia, Bosnia and Herzegovina, and Serbia

Frisch discovered that bees can distinguish various blossoming plants by their scent. Surprisingly, their sensitivity to a "sweet" taste is only slightly stronger than in humans. Frisch was the first to demonstrate (in 1914) that honey bees had color vision.

Frisch's investigation of a bee's powers of orientation were significant. He discovered that bees can recognize the desired compass direction in three different ways: by the sun, by the polarization pattern of the blue sky, and by the earth's magnetic field, whereby the sun is used as the main compass, with the alternatives reserved for the conditions arising under cloudy skies or within a dark beehive.

Bees have an internal clock with three different timekeeping mechanisms. If a bee knows the direction to a feeding place found during a morning excursion, it can also find the same location, as well as the precise time at which this source provides food, in the afternoon, based on the position of the sun.

Knowledge about feeding places can be relayed from bee to bee. The means of communication is a special dance of which there are two forms:

The "round dance" provides the information that there is a feeding place in the vicinity of the beehive at a distance between 50 and 100 meters, without the particular direction being given. By means of close contact among the bees it also supplies information about the type of food (blossom scent). 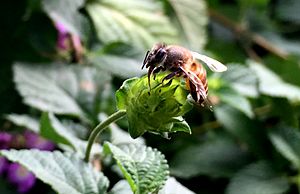 Waggle dance is a term used in beekeeping and ethology for a particular figure-eight dance of the honey bee. By performing this dance, successful foragers can share information about the direction and distance to patches of flowers yielding nectar and pollen, to water sources, or to new nest-site locations with other members of the colony

The distance to the food source is relayed by the time taken to traverse the straight stretch, one second indicating a distance of approximately one kilometer. The other bees take in the information by keeping in close contact with the dancing bee and reconstructing its movements. They also receive information via their sense of smell about what is to be found at the food source (type of food, pollen, propolis, water) as well as its specific characteristics. The orientation functions so well that the bees can find a food source with the help of the waggle dance even if there are hindrances they must detour around like an intervening mountain.

As to a sense of hearing, Frisch could not identify this perceptive faculty, but it was assumed that vibrations could be sensed and used for communication during the waggle dance. Confirmation was later provided by Dr. Jürgen Tautz, a bee researcher at Würzburg University's Biocenter. 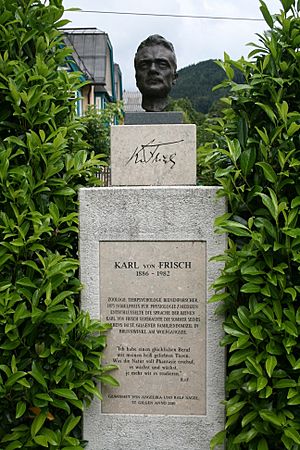 All content from Kiddle encyclopedia articles (including the article images and facts) can be freely used under Attribution-ShareAlike license, unless stated otherwise. Cite this article:
Karl von Frisch Facts for Kids. Kiddle Encyclopedia.