Konrad Zacharias Lorenz (7 November 1903 – 27 February 1989) was an Austrian zoologist, ethologist, and ornithologist. He shared the 1973 Nobel Prize in Physiology or Medicine with Nikolaas Tinbergen and Karl von Frisch. He is often regarded as one of the founders of modern ethology, the study of animal behaviour. He developed an approach that began with an earlier generation, including his teacher Oskar Heinroth.

Lorenz studied instinctive behavior in animals, especially in greylag geese and jackdaws. Working with geese, he investigated the principle of imprinting, the process by which some nidifugous birds (i.e. birds that leave their nest early) bond instinctively with the first moving object that they see within the first hours of hatching.

Although Lorenz did not discover the topic, he became widely known for his descriptions of imprinting as an instinctive bond. 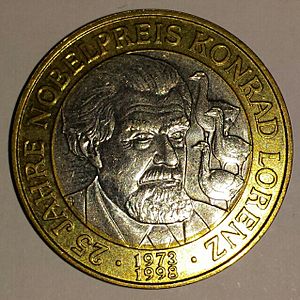 Lorenz began his studies in 1922 at Columbia University, but he returned to Vienna in 1923 to continue his studies at the University of Vienna until 1928. At this university he became an assistant professor from 1928 to 1935. While still a student, Lorenz began developing what would become a large menagerie, ranging from domestic to exotic animals.

In his popular book King Solomon's Ring, Lorenz recounts that while studying at the University of Vienna he kept a variety of animals at his parents' apartment, ranging from fish to a capuchin monkey named Gloria 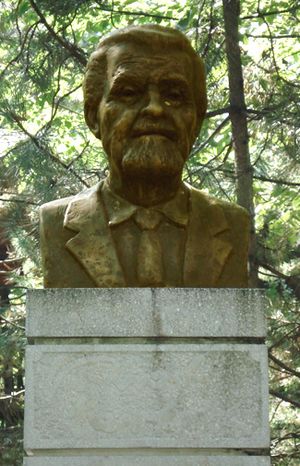 Lorenz's work was interrupted by the onset of World War-II and in 1941 he was recruited into the German army as a medic. In 1944 he was sent to the Eastern Front where he was captured and spent four years as a Soviet prisoner of war. After the war he regretted his membership in the Nazi party.

Lorenz wrote numerous books, some of which, such as King Solomon's Ring, On Aggression, and Man Meets Dog, became popular reading. His last work "Here I Am – Where Are You?" is a summary of his life's work and focuses on his famous studies of greylag geese.

In his autobiographical essay, published in 1973 in Les Prix Nobel (people who win the Nobel Prize are asked to write essays about their lives), Lorenz said that his parents were the main reason he was so successful. He also said that a book by Selma Lagerlof called The Wonderful Adventures of Nils that he read as a child was the reason he became interested in wild geese.

Lorenz retired from the Max Planck Institute in 1973 but continued to research and publish from his family home, in Austria. Konrad Lorenz died on 27 February 1989, in Altenberg.

All content from Kiddle encyclopedia articles (including the article images and facts) can be freely used under Attribution-ShareAlike license, unless stated otherwise. Cite this article:
Konrad Lorenz Facts for Kids. Kiddle Encyclopedia.