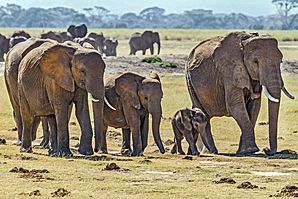 The natural sciences seek to understand how the world and universe around us works. There are five major branches (top left to bottom right): Chemistry, astronomy, earth science, physics, and biology.

There are some sciences that are used to study nature. According to these sciences, the things that can be observed in nature follow certain rules. These rules are often unknown, and natural sciences are about finding them. They often use what is called the scientific method to do this.

Some sciences, like Mathematics, can help in all of the above. They make it easier to talk about rules and models.

Other sciences that mainly look at how humans think and behave, and about their society are called social sciences.

The following sciences are natural sciences:

All content from Kiddle encyclopedia articles (including the article images and facts) can be freely used under Attribution-ShareAlike license, unless stated otherwise. Cite this article:
Natural sciences Facts for Kids. Kiddle Encyclopedia.