Apatosaurus is a sauropod dinosaur which lived in the Upper Jurassic period. It is in the same family as Diplodocus. Brontosaurus was once thought a later name for Apatosaurus, but is now proved to be a separate genus.

Apatosaurus grew as big as 21 meters long, 4.5 meters tall at the hip, and weighed up to 23 metric tons. It ate plants. Its bones have been found in Wyoming, Colorado, Oklahoma, and Utah.

When it was first found, scientists thought that Apatosaurus lived partly under water, since it could not hold its own weight on dry land. Now they think it lived on dry land, probably in herds.

The cervical vertebrae were less elongated and more solid than those of Diplodocus. The bones of the leg were much stockier (despite being longer), implying a more robust animal. The tail was held above the ground during normal locomotion. Like most sauropods, Apatosaurus had only a single large claw on each forelimb, with the first three toes on the hind limb possessing claws.

There are at least two species of Apatosaurus: 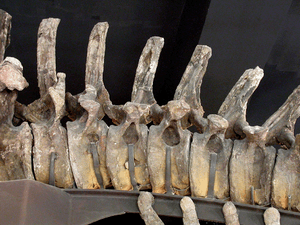 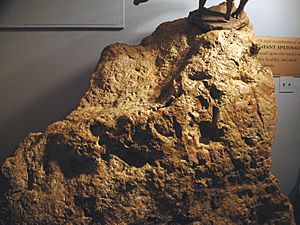 Tracks of a juvenile.

It was believed throughout the 19th and early 20th centuries that sauropods like Apatosaurus were too massive to support their own weight on dry land. It was theorized that they lived partly submerged in water, perhaps in swamps. Recent findings do not support this. Sauropods are now thought to have been fully terrestrial animals. A study of diplodocid snouts showed that the square snout, large proportion of pits, and fine, subparallel scratches of the teeth of Apatosaurus suggests it was a ground-height, nonselective browser. It may have eaten ferns, cycads, seed ferns, horsetails, and algae.

Important issues like heat control, metabolic rate and respiration are still unclear. Some scientists state that the heart would have had trouble sustaining sufficient blood pressure to oxygenate the brain. Others suggest that the near-horizontal posture of the head and neck would have eliminated the problem of supplying blood to the brain because it would not have been elevated.

All content from Kiddle encyclopedia articles (including the article images and facts) can be freely used under Attribution-ShareAlike license, unless stated otherwise. Cite this article:
Apatosaurus Facts for Kids. Kiddle Encyclopedia.