The Carnegie Science Center is one of the four Carnegie Museums of Pittsburgh, Pennsylvania. It is located in the Chateau neighborhood. It is located across the street from Heinz Field.

The Carnegie Science Center is the most visited museum in Pittsburgh. It has four floors of interactive exhibits. Among its attractions are the Buhl Planetarium (which features the latest in digital projection technology), the Rangos Giant Theater (promoted as "the biggest screen in Pittsburgh"), SportsWorks, the Miniature Railroad & Village, the USS Requin (a World War II submarine) and Roboworld, touted as "the world's largest permanent robotics exhibition." The Roboworld exhibition contains more than 30 interactive displays featuring "all things robotic", and is also the first physical home for Carnegie Mellon University’s Robot Hall of Fame. It is closed on Sundays when there is a Steelers home game.

According to Nicholas Efran, "The Carnegie Science Center has been a gathering place for kids and families for many years." However, currently there are many new exhibits that staff are "Not able to include because of the smaller size of the building" In June 2018, the museum's new wing opened, allowing the museum to host new and larger exhibits.

Its predecessor was the Buhl Planetarium and Institute of Popular Science, which opened on October 24, 1939. The Buhl Planetarium was the fifth major planetarium in the United States, and was popular for several decades. However, by the 1980s it had begun to show signs of age. An expansion was ruled out, so the Institute was relocated to the Chateau neighborhood. However, it became apparent to the Buhl Institute that the relocation efforts would require more staffing than they were able to provide. At this point, the Carnegie Institute (under the leadership of Robert Wilburn) stepped in, showing interest in merging with the Buhl Institute. Both parties agreed to the merger in 1987. On October 5, 1989, construction began on the $40 million building, designed by local architect Tasso Katselas, which was renamed the Carnegie Science Center as a result of the merger. The Henry Buhl, Jr. Planetarium and Observatory was reinvented in this new facility. The Center opened in October 1991. 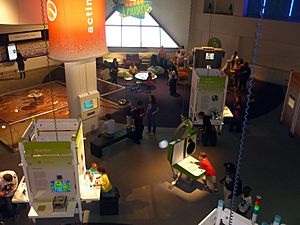 Roboworld at the Carnegie Science Center.

The Roboworld area is the second-floor attraction at the Carnegie Science Center. It is touted as "the world's largest permanent robotics exhibition", with more than 30 interactive displays featuring "all things robotic".

The first robot encounter in Roboworld is Andy Roid, the Robothespian. He is an interactive, animatronic robot that introduces visitors to the concepts of robotic sensing, thinking, and acting. The area's other exhibits showcase different types of robots, and videos containing more information about them.

Highmark SportsWorks (formerly UPMC SportsWorks) is one of the major, permanent exhibits of the Carnegie Science Center. It is one of larger science and sports exhibitions in the world, with over 30 interactive experiences in which visitors can participate. SportsWorks features three themed areas: Physics of Sports (exploring the science of balance, trajectory, center of gravity, momentum, etc.), LifeWorks (featuring information for keeping a healthy lifestyle), and Sports Challenge (demonstrating various physical activities present in many sports).

From October 8, 2007 until May 2008, SportsWorks housed the controversial exhibit BODIES... The Exhibition. At least one employee of the Carnegie Science Center left her job due to the implementation of this exhibit.

A committee of the Pittsburgh Port Authority recommended in 2007 that the site be purchased and that SportsWorks be demolished to allow for construction of tracks for the North Shore Connector, an extension of Pittsburgh's light rail line to the North Side of Pittsburgh.

The E-motion cone is a white-colored, inverted cone which sits atop the Science Center building. It was installed in 2000. At night, it is lit with different colors, signalling the weather forecast for the coming day.

All content from Kiddle encyclopedia articles (including the article images and facts) can be freely used under Attribution-ShareAlike license, unless stated otherwise. Cite this article:
Carnegie Science Center Facts for Kids. Kiddle Encyclopedia.