The Pebble Beach Golf Links, The Inn at Spanish Bay, The Lodge at Pebble Beach and four of the eight golf courses inside the Pebble Beach community are among the local assets owned by the Pebble Beach Company. Residents pay road fees for maintenance as well as Monterey County property taxes. Application of the property tax revenues is the realm of the Pebble Beach Community Services District, a public agency that is independent of local private facilities, e.g., golf courses, with an elected Board of Directors that manages essential functions including fire protection and emergency medical services, supplemental law enforcement, wastewater collection and treatment, recycled water distribution, and garbage collection, disposal and recycling. The community's post office is named Pebble Beach, as is its identity; whereas, the U.S. Census Bureau aggregates census returns from Pebble Beach as part of the larger census-designated place of Del Monte Forest. However, residents and visitors associate and identify with the name Pebble Beach; boundaries of the Del Monte Forest extend outside of the Pebble Beach community boundaries encompassing a larger forest area that comprises the wooded parts Monterey Peninsula.

Area open space is partly administered by the Del Monte Forest Conservancy, a non-profit organization designated by Monterey County and the California Coastal Commission to acquire and manage certain properties by conservation easement and, as well, by fee title. The Conservancy is governed by a self-elected volunteer board of up to 12 members working with a small part-time group of contractors and volunteers to preserve the open space within the Del Monte Forest and non-forested sites of Pebble Beach. All board members must be property owners and residents of Pebble Beach.

The name Pebble Beach was originally given to a rocky cove and beach strand, a prominent coastal segment of the Rancho Pescadero Mexican land grant that had been awarded to Fabián Barreto in 1836. Barreto died and the land went through several owners. In the 1850s, Chinese immigrants formed a series of fishing settlements along Carmel Bay including one at Stillwater Cove, next to Pebble Beach. They collected abalone and various fish. In 1860, David Jack bought the Mexican land grant, then sold it in 1880 to the Pacific Improvement Company (PIC), a consortium of The Big Four "railroad barons." By 1892, the PIC laid out a scenic road that they called the 17-Mile Drive, meandering along the beaches and among the forested areas between Monterey and Carmel. The drive was offered as a pleasure excursion to guests of the PIC-owned Hotel Del Monte, and it was intended to attract wealthy buyers of large and scenic residential plots on PIC land. Sightseers riding horses or carriages along the 17-Mile Drive sometimes stopped at Pebble Beach to pick up agate and other stones polished smooth by the waves, and they commented on a few unusual tree formations known as the Witch Tree and the Ostrich Tree—the latter formed by two trees leaning on each other. At that time, the Chinese fishing community continued in existence despite mounting anti-Chinese sentiment among Monterey residents of European heritage. At roadside stands, Chinese-American girls sold shells and polished pebbles to tourists. In the 1900s, the automobile began replacing horses on 17-Mile Drive, and by 1907 there were only automobiles. Adverse sentiments by local non-Chinese towards the Chinese fisherman and villagers of Pebble Beach was ironic in view of the vital contribution Chinese laborers made to the development of the Central Pacific Railroad, the fundamental fount of capital for the "Big Four," founders of PIC.

In 1908, architect Lewis P. Hobart was hired by PIC manager A.D. Shepard to design the Pebble Beach Lodge, a rustic log-cabin-style one-story inn completed by 1909. The rambling lodge, featuring private patio nooks and a wide pergola made of local logs, was positioned halfway along 17-Mile Drive, overlooking Pebble Beach. The great hall or assembly room was 35 by 70 feet (11 by 21 m) wide and was flanked by massive fireplaces at each end. A tavern and kitchen supplied food and drink, and later, cottages could be rented for overnight guests. Operated under the same management as the Hotel Del Monte, food service was available at all hours, including fresh local abalone chowder. The lodge was built as the community center for the wealthy residents of the Del Monte Forest, and was popular as a rest stop for 17-Mile Drive motorists. Samuel Finley Brown Morse, a distant cousin to Samuel F. B. Morse known as the inventor of Morse Code, was hired in the 1910s to manage the PIC. In 1916, Morse convinced the PIC to create a golf course at the edge of Pebble Beach and Stillwater Cove. The lodge burned down on December 17, 1917, while the course was being completed, and a completely different structure replaced it: the Del Monte Lodge. Hobart worked with Clarence Tantau to create a luxurious multi-story hotel, and Hobart designed a signature "Roman Plunge" pool to the east of the hotel. The golf course and the new lodge held a grand opening on February 22, 1919.

In May 1979, 20th Century Fox, later bought by Marvin Davis, purchased the Pebble Beach Corporation. When the film company was sold to Rupert Murdoch in 1985, Davis kept several company assets not directly related to the film and TV industry, including the Pebble Beach Company and the Aspen Skiing Company.

In 1990 Davis sold the Pebble Beach Company to the Japanese businessman Minoru Isutani, who made it a subsidiary of the Japanese resort company Taiheiyo Club Inc. under a holding company called the Lone Cypress Company. Isutani was investigated by the FBI in the early 1990s for money laundering. Isutani's $341M loss taken on the sale of Pebble Beach was cited as an example. 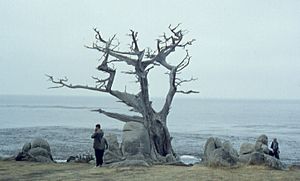 Famous "Witch Tree" landmark at Pescadero Point, Pebble Beach, September 1962. The tree was blown down by a storm on January 14, 1964.

In 1999 the Pebble Beach Company was acquired from Lone Cypress by an investor group led by Clint Eastwood, Arnold Palmer, and Peter Ueberroth. In 2000, the company initiated Measure A, a controversial development proposal. Eastwood appeared in a US$1 million legal and advertising campaign urging voters to pass Measure A. In 2006, the plan went before the California Coastal Commission for approval. On June 14, 2007, the plan was submitted again. Commissioner Sara Wan called it "wholesale destruction of the environment," and Measure A was denied in an 8 to 4 vote.

The famous landmark, known as the "Witch Tree," stood for decades at Pescadero Point until it fell during a storm on January 14, 1964. It was sometimes used as scenic background in movies and television. It was displayed as part of the coast of Italy, in the 1951 movie Mr. Imperium, with Lana Turner, Ezio Pinza, Majorie Main and Barry Sullivan. That tree was also part of the background in an early scene from the 1956 movie Julie, featuring Doris Day, while she was fleeing from her psychopathic husband, played by Louis Jourdan.

The Pescadero "Ghost Tree" gave its name to an extreme surfing location known to have storm waves as large as 60 feet (18 m) high. Effective 2009, the surf break of Ghost Tree became effectively off limits, the result of a decision by National Oceanic and Atmospheric Administration that personal watercraft, which were a virtual necessity for the tow-in only surf spot, were no longer permitted in specified waters of the Monterey Bay National Marine Sanctuary. On the last day of legitimate surf access to Ghost Tree (December 4, 2007), a well-known local surfer, Peter Davi‍—‌45 years old and one of the last ghost-riders‍—‌died in the water, apparently from drowning while in cardiac arrest.

The community has 4,531 residents and is relatively affluent, home to many retirees and well-educated workers in the social service (education and health care), management and finance sectors. While Monterey County has a very large Hispanic population, Pebble Beach is more ethnically homogenous, with 91.4% of the population being White, 5.3% Asian, 2.3% Hispanic or Latino and 0.4% African American. The median household income is $99,788, with 54% with incomes between $50,000 and $150,000 and a little more than a quarter of households, 26.2%, with incomes exceeding $150,000. Household income figures, however, may not accurately reflect the area's wealth as 50.8% of households received social security income and 30.8% were retired. Less than half of the population 16 or over, 46.4%, are employed. Of those who work, the plurality (25%) are employed in the social service, education and health care sector, followed by the management (15%) and finance sectors (15%). 2.3% of the population live below the poverty level. The area's adult population is fairly well-educated, with 61% having at least a Bachelor's degree, and 98% having a high school diploma, compared to 25% and 80% at the national average, respectively.

The annual Pebble Beach Concours d'Elegance auto show has been held in Pebble Beach since 1950. The event focuses on classic cars, and each year features a particular marque as its focus. In addition to the car competition, there is an auction, a classic car tour, and an automotive art exhibit.

Pebble Beach owes much of its picturesque qualities to the granitic rock outcroppings, stacks and small islets visible along the coast, these comprising the local portion of the federal California Coastal National Monument, which is administered by the Department of Interior's Bureau of Land Management. These are characteristic of the Salinian Block, a geologic province which runs from the Baja California Peninsula and up through California west of the San Andreas Fault. The historically inactive Fanshell Beach Fault, which exits land near Fanshell Beach in Pebble Beach, creates a divide between nearby Cypress Point and northerly Spyglass Hill that is visually appreciable. Native Monterey Cypress forest grows on the south-westerly side of Fanshell Beach Fault: a direct relationship between the underlying rock base and soils and the cypress cover type has not been confirmed.

Pebble Beach has few businesses‍—‌such as at-home cottage industries‍—‌apart from those owned by the Pebble Beach Company (except the golf courses, a private school, one gas station, and a deli) and no sidewalks. Most of the very expensive houses are obscured from view behind old-growth trees. It is quiet, secluded, and often experiences foggy weather, which occurs frequently on the Monterey Peninsula in general, but especially there because of the area adjoining the open ocean.

Pebble Beach is a gated community, but differs from most gated communities. There is an entrance fee for which The Pebble Beach Company charges $10.00 (per vehicle) from tourists driving along the 17-Mile Drive. Pebble Beach residents are issued small license plate badges that are attached near their cars' license plates or in their windshields to avoid paying the tourist fee.

In 2014 (airing 2017), Pebble Beach was the location for the HBO show "Big Little Lies," a drama which showcases relationships between high income status individuals based on the book of the same name.

All content from Kiddle encyclopedia articles (including the article images and facts) can be freely used under Attribution-ShareAlike license, unless stated otherwise. Cite this article:
Pebble Beach, California Facts for Kids. Kiddle Encyclopedia.