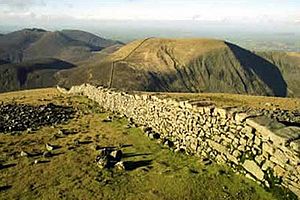 The Mourne Wall (Irish: Balla an Mhúrn) is a wall constructed to enclose a catchment area in the Mourne Mountains, Northern Ireland. It was built between 1904 and 1922 by the Belfast City and District Water Commissioners to enclose a reservoir.

Luke Livingstone Macassey (1843–1908), an Irish civil engineer and barrister, was in 1874 appointed consultant hydraulic engineer by the Belfast and District Water Commissioners. The Commission had been set up in 1840 to ensure the water supply for Belfast, at that time an expanding city. In 1891 Macassey advised the construction of a reservoir in the Mourne Mountains, as a long-term solution.

The project required the acquisition of wayleaves and water rights. Private Acts of Parliament were passed, of 1893, 1897 and 1899, on behalf of the Commissioners.

The Silent Valley Reservoir was created to hold the water in the catchment area, and supply Belfast. The main purpose of the Mourne Wall to isolate the catchment area from cattle and sheep. It is currently owned and maintained by Northern Ireland Water.

Construction and course of the wall

The wall was crafted from natural granite stone using traditional dry stone walling techniques. On average the wall is about 1.5 metres (4 ft 11 in) high and 0.8 to 0.9 metres (2 ft 7 in to 2 ft 11 in) thick. It is estimated to be 19.5 miles (31.4 km) long and passes over fifteen mountains (listed clockwise from the Kilkeel River):

The Mourne Wall Challenge is a highly challenging walking route taking in 7 of the 10 highest mountains in the Mournes and Northern Ireland, by following the historic Mourne Wall. It is a popular personal challenge undertaken by experienced hillwalkers and mountaineers, who attempt to complete the full circuit in a single day.

In the past, the Youth Hostel Association of Northern Ireland organised a popular one-day challenge walk along the wall each year, attracting more than 3,000 starters. In 1984 however this annual event was abandoned due to a variety of issues arising from the high number of participants.

In 2013, the event was revived by a new organiser. The designated route on the day of that challenge was recorded by a participant as being 30.51 km (18.96 miles) in length, with 2,527 m (8,290 ft) in height gain/descent. The designated route used in this particular organised event contained two significant diversions from the wall itself - one in Silent Valley and one in Annalong Valley.

An official organised event has not been hosted since.

Different versions of Mourne Wall challenge routes have been posted on the internet in recent years. Naturally, the first of these follows the entire length of the wall as a full circuit of the mountain land owned by Northern Ireland Water (including Silent Valley Mountain Park). A second version follows the perimeter of the rainfall catchment area only, cutting across the dam wall of the Silent Valley reservoir. A third version of the route was specified for an organised walking event in 2013. This version also appears in Paddy Dillon's guidebook 'The Mournes Walks'.

All content from Kiddle encyclopedia articles (including the article images and facts) can be freely used under Attribution-ShareAlike license, unless stated otherwise. Cite this article:
Mourne Wall Facts for Kids. Kiddle Encyclopedia.