Kids Encyclopedia Facts
This page is about County Wexford in Ireland. For the county in Michigan, see Wexford County, Michigan.

County Wexford (Irish: Contae Loch Garman) is a county in Ireland. It is in the province of Leinster and is part of the South-East Region. It is named after the town of Wexford and was based on the historic Gaelic territory of Hy Kinsella (Uí Ceinnsealaigh), whose capital was Ferns. Wexford County Council is the local authority for the county. The population of the county is 145,273 according to the 2011 census. 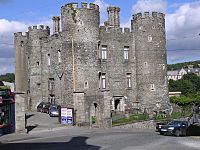 The county is rich in evidence of early human habitation. Portal tombs (sometimes called dolmens) exist at Ballybrittas (on Bree Hill) and at Newbawn — and date from the Neolithic period or earlier. Remains from the Bronze Age period are far more widespread. Early Irish tribes formed the Kingdom of Uí Cheinnsealaig, an area that was slightly larger than the current County Wexford.

County Wexford was one of the earliest areas of Ireland to be Christianised, in the early 5th century. Later, from 819 onwards, the Vikings plundered many Christian sites in the county. Wexford town became a Viking settlement near the end of the 9th century.

Wexford was the site of the invasion of Ireland by Normans in 1169 at the behest of Diarmuid Mac Murrough, King of Uí Cheinnsealaig and king of Leinster (Laigin), which led to the subsequent colonisation of the country by the Anglo-Normans.

The native Irish began to regain some of their former territories in the 14th century, especially in the north of the county, principally under Art MacMurrough Kavanagh. Under Henry VIII the great religious houses were dissolved, 1536–41; in County Wexford this included Glascarrig Priory, Clonmines Priory, Tintern Abbey, and Dunbrody Abbey.

On 23 October 1641, a major rebellion broke out in Ireland, and County Wexford produced strong support for Confederate Ireland. Oliver Cromwell and his English Parliamentarian Army arrived 1649 in the county and captured it. The lands of the Irish and Anglo-Normans were confiscated and given to Cromwell's soldiers as payment for their service in the Parliamentarian Army. At Duncannon, in the south-west of the county, James II, after his defeat at the Battle of the Boyne, embarked for Kinsale and then to exile in France.

County Wexford was the most important area in which the Irish Rebellion of 1798 was fought, during which significant battles occurred at The Battle of Oulart Hill took place near Oulart during the 1798 rebellion. Vinegar Hill (Enniscorthy) and New Ross. The famous ballad Boolavogue was written in remembrance of the Wexford Rising. At Easter 1916, a small rebellion occurred at Enniscorthy town, on cue with that in Dublin. During World War II, German planes bombed Campile. In 1963 John F. Kennedy, then President of the United States, visited the county and his ancestral home at Dunganstown, near New Ross.

Wexford is the 13th largest of Ireland's thirty-two counties in area and 14th largest in terms of population. It is the largest of Leinster's 12 counties in size, and fourth largest in terms of population. The county is located in the south-east corner of the island of Ireland. It is bounded by the sea on two sides—on the south by the Atlantic Ocean and on the east by St. George's Channel and the Irish Sea. The River Barrow forms its western boundary. The Blackstairs Mountains form part of the boundary to the north, as do the southern edges of the Wicklow Mountains. The adjoining counties are Waterford, Kilkenny, Carlow and Wicklow.

County Wexford is known as Ireland's "sunny southeast" because, in general, the number of hours of sunshine received daily is higher than in the rest of the country. This has resulted in Wexford becoming one of the most popular places in Ireland in which to reside. The county has a mild, but changeable, oceanic climate with few extremes. The North Atlantic Drift, a continuation of the Gulf Stream, moderates winter temperatures. There is a meteorological station located at Rosslare Harbour. January and February are generally the coldest months, with temperatures ranging between 4–8 °C on average. July and August are generally the warmest months, with temperatures ranging between 12–18 °C on average. The prevailing winds are from the south-west. Precipitation falls throughout the year. Mean Annual Rainfall is between 800–1200 mm. Generally, the county receives less snow than more northerly parts of Ireland. Serious snowfalls are relatively rare, but can occur. The one exception is Mount Leinster, visible from a large portion of the county, which is frequently covered with snow during the winter months. Frost is frequent in winter months, less in coastal areas. 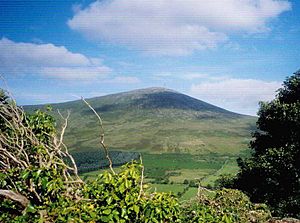 Largely low-lying fertile land is the characteristic landscape of the county. The highest point in the county is Mount Leinster (795 m, 2610 ft) in the Blackstairs Mountains in the north-west on the boundary with County Carlow. 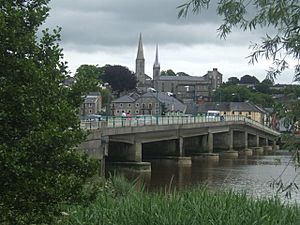 Bridge over the River Barrow at New Ross.

The major rivers are the Slaney and the Barrow.

At 192 km (119 mi) in length, the river Barrow is the second longest river on the island of Ireland.

There are no significant fresh-water lakes in the county. Small seaside lakes or lagoons exist at two locations – one is called Lady's Island Lake and the other Tacumshin Lake.

The Wexford Cot is a flat bottomed boat used for fishing on the tidal mudflats in wexford, also a canoe shaped Punt fitted with a gun, called a Float in Wexford is used traditionally to shoot game birds in the North Slob mud flats.

Most, but not all, of the county was covered with the ice sheet during the last Ice age. As the ice retreated, County Wexford would have been one of the first areas to be covered with glacial drift (a mixture of boulders, clay, sand and gravel) that blanketed the existing bedrock. This has led to high quality soils, suitable for a wide range of agriculture. A very detailed soil survey of the county was published in 1964, as part of the 'National Soil Survey of Ireland'. It classifies each area of the county according to its specific soil type.

Most of the county is covered with soil called brown earths, described as well-drained and having a wide use range. After that, gleys (poorly to imperfectly drained with a limited use range) are the next major soil type, primarily located in the south-east of the county and east of Gorey (along the coast). Gleys are dotted elsewhere around the county in small areas, and where they occur they generally form bogland. The last major soil type is brown podzolics, located mainly near the edges of the Blackstairs Mountain range and around Bunclody and in the baronies of East Shelmalier and South Ballaghkeen. Though there are areas covered with other soil types, these are of limited extent.

Common species of tree include oak, ash, sycamore, alder, blackthorn, hawthorn, beech and birch. Less common (but plentiful) are wild cherry and Scots pine (also called red deal). Elm is now far less common, due to the devastating effects of Dutch elm disease. Gorse (or furze) is very common. A priority habitat in Wexford is the grey dune, on which many native wild flora grow, including bee orchid and pyramidal orchid. Despite the designation of much of this habitat as a Special Area of Conservation, it remains threatened by destruction for agricultural intensification. There is very little natural forest in the county. Most natural trees and vegetation grow on hedgerows.

South-eastern Wexford is an important site for wild birds—the north side of Wexford Harbour, the North Slob, is home to 10,000 Greenland white-fronted geese each winter (roughly one third of the entire world's population), while in the summer Lady's Island Lake is an important breeding site for terns, especially the roseate tern. The grey heron is also seen.

Throughout the county pheasant, wood pigeon and feral pigeons are widespread. Swans, wild duck, kingfisher, and owls (the long-eared owl, the short-eared owl, and the barn owl) are less common - but plentiful. Red grouse, once common, are now extremely scarce. The species has been in decline for some decades. Threats include habitat degradation, disease, predation and over-hunting. Red grouse in Ireland are now considered threatened. The corncrake, also once very common, is now almost never seen. Smaller birds—such as crows, swallows, robins, wrens and so on—are very common. The first magpies in Ireland were recorded by Robert Leigh, of Rosegarland, County Wexford, as having appeared in the County of Wexford about 1676. Land mammals include badger, rabbit, otter, hedgehog, red fox, mink, bats, squirrels (red and grey), rats (brown and black - both introduced species), and mice (wood (or field) and house). Two types of hare—the Irish (or mountain) hare and the less common brown (or European) hare—are found. Hare is not nearly as common as rabbit. The stoat (Mustela erminea hibernica) is also reasonably common. Locally the stoat is just as often incorrectly called a weasel.

Only two types of seal are found on County Wexford's coast—Atlantic grey seals are very plentiful in coastal areas, but the slightly smaller common (or harbour) seal is less common, yet plentiful. The small tortoiseshell butterfly (reddish-orange colour, with black markings) is the most common species of butterfly in the county. Various types of moth are also common. The common frog is plentiful, and is the only type of frog found.

Since 1951, an opera festival, Wexford Festival Opera, takes place every year in the Theatre Royal in Wexford town and runs for several weeks. A new Opera House has recently replaced the old one on the same site, it is now called Wexford Opera House. The new theatre opened in 2008 and consists of two theatres, the O'Reilly theatre and the Jerome Hynes theatre.

There is a renowned singing tradition in County Wexford. Having an abundance of traditional songs, many of which relate to the rebellion of 1798, the county has for many years had a strong presence in the Irish traditional singing scene. Noted singers include All-Ireland Fleadh Champions Paddy Berry, Seamus Brogan and Niall Wall. Paddy Berry has also collected and published a number of songs from Wexford.

Beaches in Curracloe, County Wexford were used to film the opening scenes of the movie Saving Private Ryan, which depicted the D-day assault on Omaha Beach. The Count of Monte Cristo, directed by Kevin Reynolds, was partly filmed in the village of Duncannon in 2000 — Duncannon Fort being used for one of the main scenes. The movie Brooklyn (film) was partially filmed in Enniscorthy and featured some of the locals as extras.

The scenic Bannow Drive, popular amongst tourists, is a signposted route through four Wexford villages: Duncormick, Cullenstown, Bannow and Wellingtonbridge.

Ballyteigue Burrow, located near Duncormick, is one of the finest protected sand dune systems in Ireland. Rich in wildflowers, wildlife and butterflies, this 9 km coastal stretch is a protected nature reserve by the golden sands of Ballyteigue Bay, with spectacular scenery.

The Hook Peninsula is noted for its many beaches and spectacular scenery. It features the medieval Hook Head lighthouse and the historic townland of Loftus Hall.

Other places of interest include:

All content from Kiddle encyclopedia articles (including the article images and facts) can be freely used under Attribution-ShareAlike license, unless stated otherwise. Cite this article:
County Wexford Facts for Kids. Kiddle Encyclopedia.