Ferns (Irish: Fearna, short for Fearna Mór Maedhóg) is a historic town in north County Wexford, Ireland. It is 11.7 km (7.3 mi) from Enniscorthy, where the Gorey to Enniscorthy R772 road joins the R745, both regional roads. The remains of Ferns Castle are in the centre of the town. 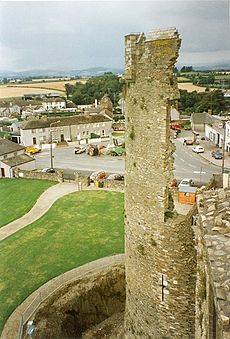 View of Ferns from Castle tower 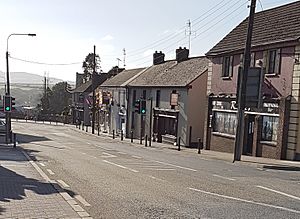 Ferns is believed to have been established in the 6th century, when a monastery was founded in 598 dedicated to St Mogue of Clonmore (St.Aidan) who was a Bishop of Ferns. The town became the capital of the Kingdom of Leinster, and also the Capital of Ireland when the kings of that southern part of the province established their seat of power there. It was a very large city then but shrunk in the fire that destroyed most of it. The city stretched all the way down and further than the River Bann (tributary of the River Slaney), if it was not burnt it would've been one of Ireland's biggest cities today. King Dermot MacMurrough founded St. Mary's Abbey as a house of Augustinian canons c. 1158 and was buried there in 1171.

Ferns Castle, an Anglo-Norman fortress, was built in the middle of the 13th century by William, Earl Marshall. Today about half of the castle still stands. The town also contains the 13th-century St Edan's Cathedral (Church of Ireland) This was a big aisled cathedral with a long chancel. The present east wall of the cathedral is the original east wall; the cathedral ran further to the west, towards the entrance to the cemetery. It has been suggested that the ruined building to the east, which has a row of fine Gothic windows, might have been built to house the effigy of Bishop John St John, now in the porch of the church. The Tower and the Chapter House were added on in the 19th century. The cemetery has several high crosses and parts of crosses.

The old Catholic church stood at the north of the town until the 1970s, when there was a roof problem. The Parish Priest at the time ordered it, with the go ahead of the parish to demolish it. A convent, St. Aidan’s Monastery of Adoration now stands in its place.

The foundation stone of the new Church of St. Aidan was laid on the Feast of St. Aidan, 31 January 1974, the foundation stone lies at the northwest corner wall of the church at the entrance to the sacristy. The new Catholic Church was completed in 1975. In the 2000s the new church went under a major refurbishment since it too had roof problems with leakage of the roof and so on, there was a previously roof problem 15 years after the church was built. They replaced the slates with new composite metal-material, the inside was also refurbished and few minor changes were made to the look of the building.

The 19th century population peaked in 1851, but never reached the levels of medieval times. Lewis's Topography of 1834 claimed the town "consists chiefly of one irregular street, and contains 106 houses indifferently built, retaining no trace of its ancient importance". The Abbey, St.Peter's Church (Catholic and Anglican), and the remainder of the great cathedral are regarded as holy places and regarded as church still this includes the abbey which now has the title of a church and abbey.

The town gave the name to the Diocese of Ferns (both Roman Catholic and Church of Ireland). The town's religious traditions live on today through the recent establishment in Ferns of a hermitage.

The whole history of modern Ireland stems from Ferns – Diarmuid MacMurrough, King of Leinster invited the Normans in 1169 to help him fight his battles (they never left) – he sealed the deal with his daughter Aoife’s marriage to Strongbow.

Ferns boasts many ecclesiastical sites dating from early Christian era through Norman and the Middle Ages. Heritage sites include

The Grave of King Dermot MacMurrough

Ferns is located on the R772 road, having been bypassed by the M11 motorway linking Dublin to Wexford since 18 July 2019.

Regular (almost hourly) bus services link Ferns to Dublin and Rosslare are provided by a number of companies.

Ferns is the home of Ferns St Aidan's GAA, a hurling, Gaelic football and camogie club.

All content from Kiddle encyclopedia articles (including the article images and facts) can be freely used under Attribution-ShareAlike license, unless stated otherwise. Cite this article:
Ferns, County Wexford Facts for Kids. Kiddle Encyclopedia.