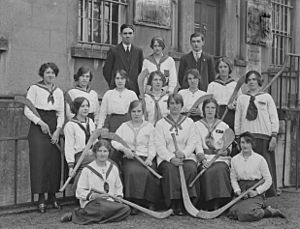 A camogie team pictured in Waterford in October 1915

Camogie (in Irish, camógaíocht) is an Irish team sport, organised by the Camogie Association of Ireland, the women's variant of hurling. The rules are almost identical to hurling with a few exceptions.

One is that goalkeepers wear the same colours as outfield players and a player in camogie can handpass a score, which is not allowed in the men's game. All games last 60 minutes (senior inter-county hurling games last 70), and dropping the camogie stick to handpass the ball is allowed. The All-Ireland Final is held every year in Croke Park during September, usually the week between the hurling final and Gaelic football final. There are two main competitions; the National League which is staged during the winter-spring months and is used as a warm-up to the All-Ireland Championships during the summer.

The reigning champions are Wexford.

Camogie/hurling is unique in that it uses a different name for the version played by men and women. The reason is complicated: men play using a curved stick called in Irish a camán. Women would use a shorter stick, called by the diminutive form camóg. The suffix -aíocht was added to both words to give names for the sports: camánaíocht (which became iománaíocht) and camógaíocht. When the Gaelic Athletic Association was founded in 1884 the English-origin name "hurling" was given to the men's game. When an organisation for women was set up in 1904, it was decided to Anglicise the Irish name camógaíocht to camogie.

All content from Kiddle encyclopedia articles (including the article images and facts) can be freely used under Attribution-ShareAlike license, unless stated otherwise. Cite this article:
Camogie Facts for Kids. Kiddle Encyclopedia.